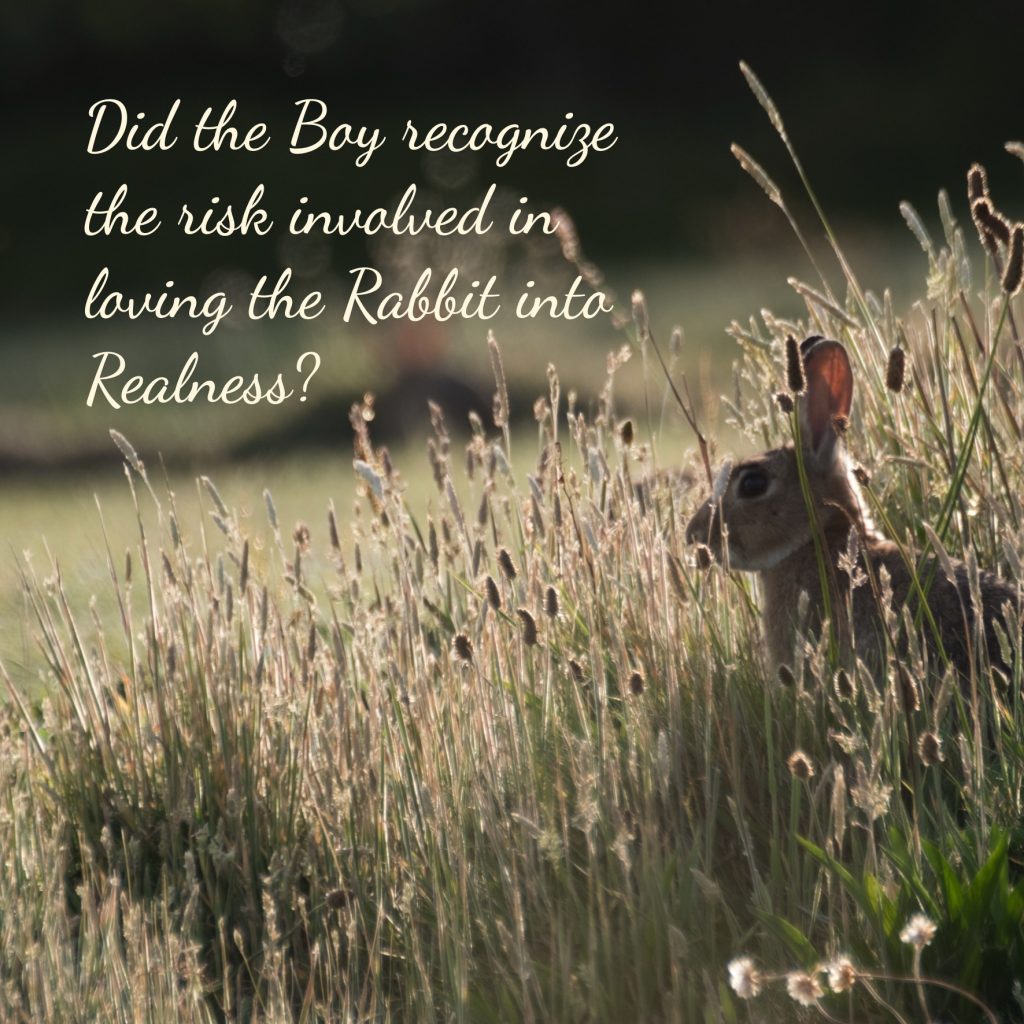 “Weeks passed, and the little Rabbit grew very old and shabby, but the Boy loved him just as much. He loved him so hard that he loved all his whiskers off, and the pink lining to his ears turned grey, and his brown spots faded. He even began to lose his shape, and he scarcely looked like a rabbit any more, except to the Boy. To him he was always beautiful, and that was all that the little Rabbit cared about. He didn’t mind how he looked to other people, because the nursery magic had made him Real, and when you are Real shabbiness doesn’t matter.”
― Margery Williams, The Velveteen Rabbit

I wonder if the Boy knew the risk he was taking when he loved the Rabbit so hard he became Real. I wonder if he contemplated the fact that, unlike stuffed bunnies that are easy to control and contain, real bunnies have minds of their own and can hop off into the woods when they choose and leave their loved ones behind.

I’m going to assume that he knew those things, but was confident that his love was big enough to handle the risk (though I admit that it makes me sad that he no longer recognizes the Rabbit once he’s hopped off into the woods).

To witness and hold space for someone who’s learning to liberate themselves from old expectations, old projections, and old social programming can be painful and frightening and it can trigger all kinds of old hurts and unmet needs in us. “Who will they be when they transform and become more authentically themselves?” we wonder… “Will they still want me around? Will I be left behind? Will their stretching require that I stretch too, in order to meet them in that new place in the woods?”

A couple of recent parenting experiences have given me a new appreciation of what the Boy might have felt.

First, my youngest daughter announced she was joining a lawsuit against the federal government over the impacts of climate change. Now… there are no parenting books that teach you the “ten easy steps for supporting your teenage daughter when she decides to sue the federal government.” Nope – you just have to muddle through that one on your own.

But there was something else going on for me under the surface… something that made me feel a little like I imagined the Boy might have felt when he contemplated the risks involved in loving the Rabbit into Realness. What if allowing her to step into this was allowing her to hop off into the woods without me? What if she was entering dangerous territory where I could no longer protect her or control her environment, where she’d need to use her own skills to survive?

And what if… in doing what she was choosing to do, she was rejecting the “nursery” – effectively tossing off the social conditioning and safety rules that I’d passed down to her?

In the “nursery” – that space that’s made up of the old furniture we inherited from our parents, all of the old rules that our religions and cultures passed on to us, and all of the old boundaries and limitations that give us comfort but keep us trapped – it’s not safe to challenge authority. It’s not safe to raise your voice too loud, to speak out of turn, to break from old patterns, or to reject the old rules of decorum. It’s ESPECIALLY not safe if you’re a young woman.

Those are the things one can only do once you’ve rejected the nursery and headed into the woods. They can only happen when you dare to be Real.

The question I had to ask myself was… Was I willing to love my daughter in a brave enough way to let her leave the nursery, step into the woods, and become Real?

A whole lot of my social programming started to flare up when I considered it. “Women don’t talk too loud or make spectacles of themselves,” I heard the patriarchy say, as it tried to pull us both back into the nursery. “Mennonites don’t take legal action and ESPECIALLY not against their own government,” the voice from the religious lineage tugged. “You’ll be rejected by your conservative relatives,” I heard my old trauma say. “Your daughter will face ridicule and your family will be shamed,” my fear of abandonment whispered.

One by one, I had to quiet those voices and lean into what mattered – my love for my daughter and my belief that that love was big enough to hold the Realness and the risk. If she feels the urgency to lend her voice to the looming climate crisis, why would I get in her way because of my own fears? The planet no longer has time for our timidity. I chose to support her and we traveled to Vancouver together to participate in a whirlwind series of public events, ceremonies, and workshops.

I opened the nursery door and let my daughter wander into the woods and after I watched her, standing up in front of fifteen thousand people (on stage next to Greta Thunberg and David Suzuki), and being calmly interviewed on live national media, something remarkable happened. I recognized that not only was I helping to love HER into Realness, SHE was helping to love ME into Realness too. When I witnessed her courage in rejecting the social conditioning that wanted to keep her in the nursery, I was able to let go of some of the social conditioning that was still trying to pull me back there too.

A week after we returned home, when I found myself having to defend her against an older male relative who bullied her in a private message, I found a new freedom that had come from silencing the voices of the patriarchy, religion, and family lineage ringing in my head.

Not long after that, I had another opportunity to love someone into their Realness, and in some ways, this required even greater and more personal risk.

I could sense that something was bothering one of my older daughters and so I knocked on her door and asked if she’d talk to me about it. “You’re not going to like what I need to say,” she said, and she was right. What she told me was painful and hard to process. While she’d been trying to stay positive and supportive of her younger sister’s significant moment on the climate activism stage, what it triggered in her was resentment for the ways that she hadn’t received the same support when she was in high school.

“I see her getting the therapy she needs, and I see you cheering her on and protecting her when people bully her, and I feel cheated that I didn’t get those things from you when I was her age,” she said. “I was going through mental health challenges too and I felt like you didn’t believe me or offer me the resources she’s gotten. And most of all, I didn’t feel like you protected me from Dad’s emotional abuse.”

She was right. I wasn’t the mom for her then that I’ve been for her sister in recent years. I was far more stuck in the “nursery” back then, still trying to live up to what I thought my role as a good wife and good mom should be, trying to hold the family together, trying to keep the peace because that’s what my social conditioning had convinced me was right. She had the misfortunate of being in high school during the time when my mom died, I was starting my business, her dad attempted suicide, and our marriage was crumbling. We announced our separation to her and her sisters, in fact, the day after her high school graduation. It was a tumultuous time for me, and in the midst of all of that, I was failing to love my daughter into her Realness.

Fortunately though, it wasn’t too late. She was sitting there in front of me, opening her heart to me, offering me another chance to give her the kind of love she needed. In that one tender moment, there was hope for redemption if I made the right choice. I took a few deep breaths, and I apologized. I took ownership of the ways I’ve failed her and I admitted the mistakes I’d made in clinging to the old stories of what was right instead of stepping into the wilderness with her.

She forgave me and a beautiful thing happened. We both became more Real. We took the risk and found our love was big enough to hold the risk.

Attachment Theory teaches us that we all need healthy attachments (especially in childhood, but also in adulthood) so that we can grow into our own confidence, authenticity and resilience. A healthy attachment system involves both a safe haven and a secure base. The safe haven protects us and offers comfort when we’re afraid or need time for healing, and the secure base offers a launching pad from which we can move into boldness.

That’s what the Boy was offering the Rabbit when he dared to love him into Realness and that’s what I strive to offer my daughters. If I only give them the safety without the freedom, then I keep them stuck in the nursery. But if the freedom is also available to them when they’re ready for it, then they can find the adventure that calls them and they can step into it knowing the door remains open when they need it.

The risk is part of the process.

Note: My daughters have given permission for me to share this.