Sometimes you have to write on the walls: Some thoughts on holding space for other people’s personal growth 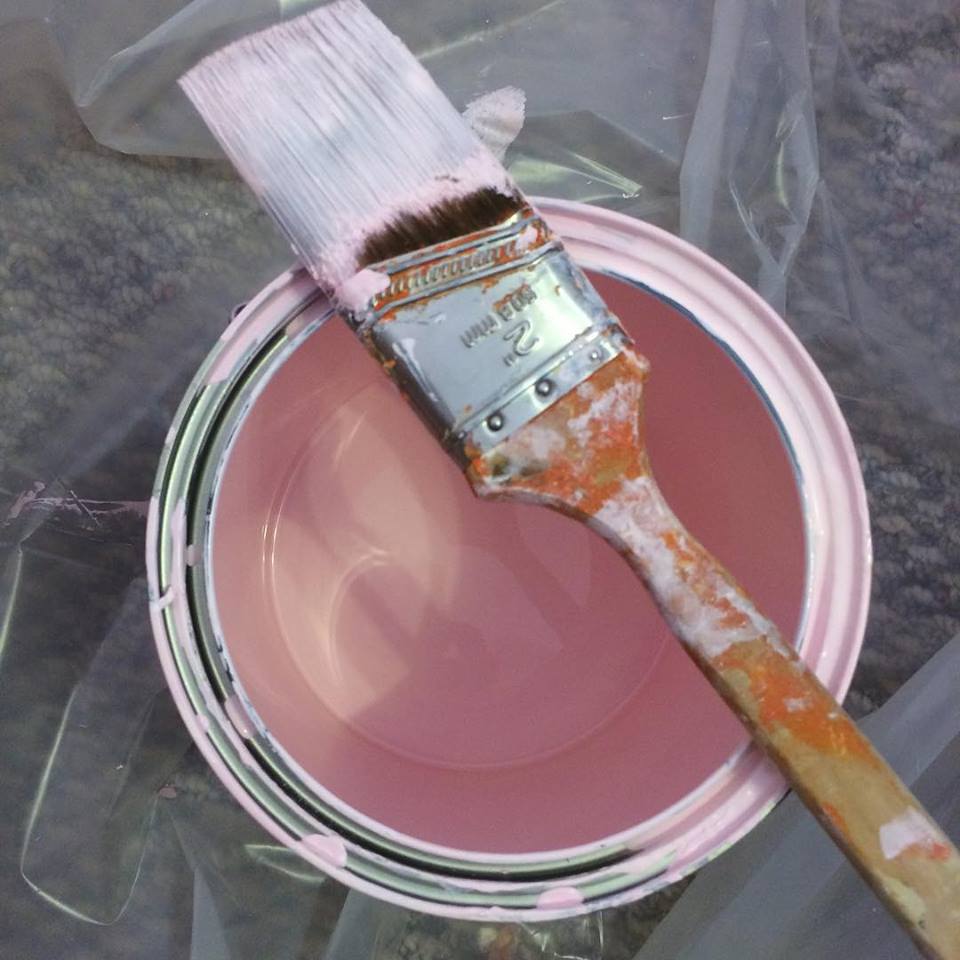 It all started in Maddy’s room. She’d been complaining for quite some time that she’d had to inherit a room decorated for her sisters when they were quite young and it was time for her to have a room fit for her own thirteen-year-old personality. After waffling between a Harry Potter themed room and pretty-in-pink, she chose a pale pink and we bought the paint. It made me smile when I applied it, because it was the exact opposite of what had happened when I was that age. I couldn’t wait to get rid of the pink in the little-girl bedroom I shared with my sister. In my mind, pink = girlie and girlie wasn’t cool, so the bedroom was painted blue.

Like many in my era, I was figuring out who I was in the face of the feminist movement, and instead of embracing what was feminine, I ran away from it and tried to prove I was worthy by being more masculine. It wasn’t until years later that I realized that a) pink is just a colour and has no inherent meaning, and b) to be whole and strong means to embrace what is feminine along with what is masculine.

The day we were choosing the paint, I overhead Maddy (who wears nothing but dresses) say to her friend, “Legally Blonde is my favourite movie because it shows that you can be both feminine and feminist at the same time.” I’m so glad she’s figuring that out earlier than I did.

My other two daughters are now 18 and 19 and though they’ll both be in university in the Fall, they’ll be staying home and studying locally for now. They were switching bedrooms (it was the 18 year old’s turn to have the bigger room in the basement), so it seemed like the ideal time to refresh their rooms as well.

In both cases, we transformed the rooms from their early-teen choices to their much more grown-up choices. The room in the basement (that had been Nikki’s and was becoming Julie’s) was four bright colours – blue, green, orange and yellow – and was now getting a much more subdued look – black, grey, and light teal-grey. The room upstairs was going from orange and green with huge contrasting polka-dots to a dark beige and white.

Julie’s former orange and green room presented us with the greatest challenge, not because of the boldness of the colours but because she had covered the walls with hundreds of quotes, thoughts, art, etc., in Sharpie marker. 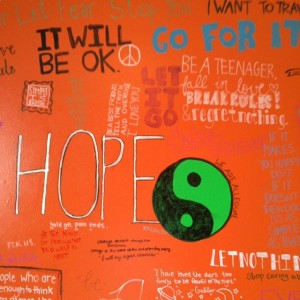 I knew from previous experience that Sharpie marker is almost impossible to cover with paint, even with the very best primer, and yet, five years ago, when she’d asked if she could do it, I said yes. Julie has a gift for script-work and I knew it would be interesting, but more importantly, I had an intuitive sense that it was what she needed at the time.

The hardest year of Julie’s life so far was when she was thirteen and in grade 8. She’s a deep thinker and a deep feeler, and the world was too intense for her at the time. We watched her walk through a depression and we worried every single day about whether we were doing the right things to support her. When she started writing on the walls, I bought the Sharpie markers, hoping that turning her bedroom walls into a journal of her angst and attempts to rise out of that angst might be healing for her. It was.

Some of what was on the walls was quite angry (especially what she hid in the closet), some was quite hopeful, and all of it was a search for her own path and for meaning in a complex world. Like, for example, the giant word “HOPE” with the smaller words underneath “hold on pain ends”.

While we painted over the Sharpie markings last week, Julie thanked me for letting her do it. On an Instagram photo she posted, she said this: “Incredibly thankful to have the kind of parents who let their angsty 13 year old daughter put her art all over her walls, even if it involves buying $70 primer to cover it up 5 years later.”

Like any parent, I had no idea if we were doing the right thing at the time, and yet we did what we could. And now she has grown into a strong, articulate and wise 18 year old who was class valedictorian at her recent graduation and who won a scholarship for being a gifted writer. (Here’s a piece of her writing I once shared on my blog.)

A few insights emerged while I painted the walls last week, not just about parenting but about holding space for anyone going through their own personal growth. Parenting three daughters who each have unique (and surprisingly different) personalities is a great training ground for my coaching and facilitation work.

Here’s what I’m learning about holding space for people in the midst of their own personal growth:

1) Respect each person as an individual. No two people need exactly the same things at the same time. My other 2 daughters never wrote on the walls, but they need other things, and so we try to offer them what they need to help them through the rough spots. When I try to treat them all the same, I do them a disservice. For example, one is an introvert, one’s an extrovert and one is somewhere in between. They’re learning to recognize what they each need in order to replenish their energy.

2) Honour whatever place a person is in their own journey. Don’t expect someone else’s journey to look anything like yours. All three bedrooms are completely different from what they were and all of them reflect the places the girls are in right now (not five years ago and not five years in the future). There are choices in each bedroom that are different from the choices I might have made, but I’m not the ones occupying those spaces.

3.) Help people find their own right creative practices. During Julie’s depression, I tried to get her to do some of the things that help me through the darkness, but none of those things were right for her. I couldn’t take that personally because it wasn’t about me – it was about her. What worked for her was Sharpie markers and permission to make art on the walls.

4.) Don’t be afraid to let others take risks you wouldn’t take. I often marvel at how confidently Maddy embraces dresses and the colour pink. (At the same time, she also considered black skull-and-crossbone curtains – she is far from one-dimensional.) None of her friends wear dresses and I doubt whether any of them would choose the colour of paint she chose, and yet it’s what she likes and that’s all that matters.

5.) Give people a safe place to hide, to be themselves, to fail, or separate themselves from others. I am so glad that I had the privilege of giving each of my girls a beautiful new space to call their own. They are all learning to honour their own choices, their own sense of when they need to withdraw from the world, and their own boundaries. Those are powerful things to learn, especially for teenage girls navigating a world that places far too many expectations on them. Nikki, my most introverted daughter, loves to close the door to her room and listen to her record player alone, while her more extraverted sisters have been happy to invite friends over to enjoy their rooms with them.

I don’t often write posts about my daughters or about parenting, because their stories are their own and because most days I feel like I’m wandering around in the dark trying to feel my way through. But my parenting journey has taught me much about what it means to hold space for people on their own personal growth paths and I know that I am a better coach and facilitator for the lessons I’ve learned along the way. I can only hope that my daughters will continue to grow into strong, resilient, and courageous young women.