Serving the world as wounded healers

“In a futile attempt to erase our past, we deprive the community of our healing gift. If we conceal our wounds out of fear and shame, our inner darkness can neither be illuminated nor become a light for others.” – Brennan Manning 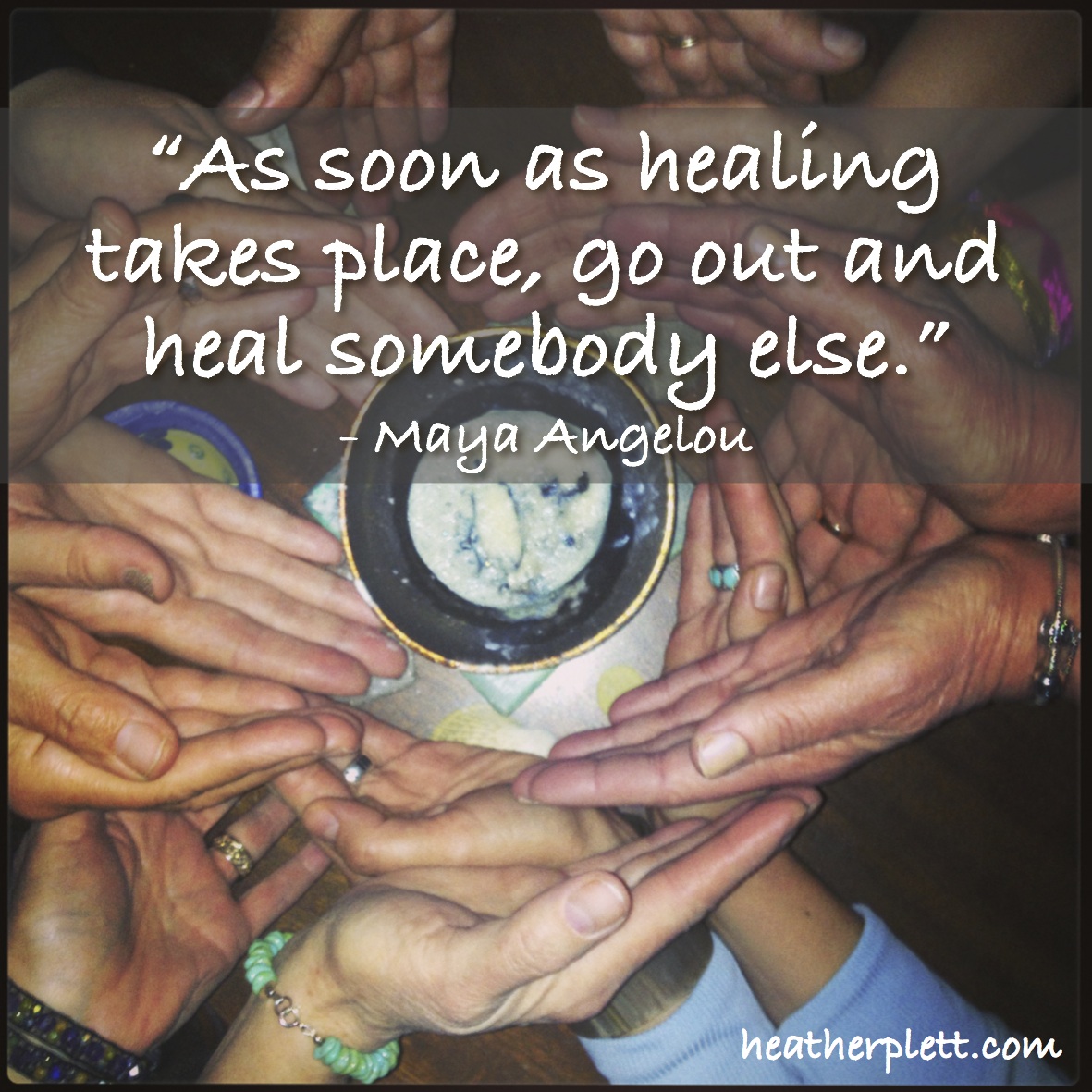 On Sunday I sat in a circle of wounded healers. These were the openhearted people who had gathered for our second Race to Peace conversation.

It started with Rosanna Deerchild, the first to offer healing out of her own wounds. In the Maclean’s article that named our city the most racist in Canada, Rosanna shared how she has faced racism on a weekly basis. “Someone honks at me, or yells out ‘How much’ from a car window, or calls me a stupid squaw, or tells me to go back to the rez. Every time, it still feels like getting punched in the face.”

When Rosanna’s face appeared, without her blessing, on the front cover of Maclean’s, and she was suddenly thrust into the spotlight as the “face of racism”, she made a courageous choice. Instead of responding with outrage, she decided to reach out with healing. She offered to host dinner and a conversation with people in the city about race relations, and out of that willingness, Race to Peace was born.

Rosanna’s choice inspired others to make similar choices. In the circle that gathered on Sunday, there were many who had been wounded and are now willing to extend healing.

There was the man who’d gotten a girl pregnant at 13, joined a gang, landed in jail, and was now studying to be a social worker so that he could help other young men stay out of gangs and jail and make a positive impact on the world.

There was the woman who’d immigrated from the Philippines and had experienced racism in trying to find a job in Canada and wanted to support other job-seekers with similar stories.

There was the man who’d experienced conflict in El Salvador who is now passionate about peace in his adopted country.

There was my husband, who dropped out of school in junior high because of his own anxiety and insecurity, found the courage to go to university as a 40 year old father, and now teaches in a jail.

And there was me… once raped by an indigenous man and determined not to let that make me bitter toward people of his race or gender.

The term “wounded healer” comes out of the work of psychologist Carl Jung, who believed that analysts are compelled to treat patients because the analysts themselves are wounded. My friend Jo, who is also a psychologist, says that most of the people she studied with ended up in psychology for that very reason. According to some research by Alison Barr, “73.9% of counselors and psychotherapists have experienced one or more wounding experiences leading to their career choice.”

This is not unique to psychologists. Caregivers of all kinds (nurses, hospice workers, coaches, social workers, grief counselors, etc.) are often in the line of work they’re in because they first experienced their own wounds. (Of note: Henri Nouwen has written a book related to the topic, called Wounded Healer.)

“As soon as healing takes place, go out and heal somebody else.” – Maya Angelou

We are always given a choice what to do with our wounds. We can use them as an excuse to go out and wound other people (which is at the root of most of the pain in the world), or we can do the hard work of healing and then use that healing as a gift to help in other’s healing. The wounded healer emerges in all of us who make the right choice.

I first stepped into my coaching vocation in a hospital room.

I’d landed there in the middle of my third pregnancy after my cervix had suddenly become incompetent and medical intervention had failed to correct the situation. Truth be told, I wouldn’t have been in that situation if it hadn’t been for a series of doctors’ errors.

Lying on my back in a hospital room, fearing for my son’s life, I realized I had a choice to make. I could be bitter and resentful and blame the doctors for what had happened, or I could accept the situation and forgive the doctors. I chose the second.

Once I made that choice, I was at peace. Though it was stressful not knowing what would happen to the baby and not being in control of my own life while I waited, I was surprisingly calm. Since I could do nothing else, I began to turn my hospital room into a little spiritual retreat centre, with gentle music playing, cards and pictures from my kids on the wall, and fresh fruit and flowers on the windowsill.

People began to notice how peaceful my room was, and unexpected visitors started showing up. Other patients, cleaning staff, doctors, friends, and even other people’s visitors – all of them showed up there at one time or another and all remarked at the peacefulness of the room. Some of the nurses on the floor started dropping in during their breaks because my room was more relaxing than their coffee room. A cancer patient from across the hall became a regular visitor because her visits made her feel less anxious.

While they were there, people began to share things with me – personal things that they were working through in their own lives. There was the nurse who was struggling with parenting decisions, another nurse who’d moved from Africa and was finding it difficult to adjust to a new culture, the cancer patient who was afraid to die, and a friend who was trying to make a difficult decision about whether to step into leadership.

Without intending to, I became confidante and coach to those people. Long before I knew the term “holding space” I was doing it in that hospital room for anyone who needed it. I had plenty of time on my hands and I was willing to be of service and that willingness drew people to me. It was both humbling and eye-opening.

There I was, confined to my hospital room, serving as a wounded healer to friends and strangers alike. Because of my own fear, I could hold theirs without judgement. Because I’d walked through injustice and anger and came through to forgiveness, they saw something in me that they could trust. Because I made the effort to create a peaceful space in a tumultuous situation and environment, they sought me out as friend and healer.

That experience changed my life and led me to the work that I now do. None of it could have happened, though, if I hadn’t first been wounded. If that pregnancy had been easy and had resulted in a living child (instead of my stillborn son, Matthew), I might have carried on in my relatively successful corporate job. I might never have discovered my ability to hold space for other people and might never have contributed to the healing of their wounds.

The same can be said for that long ago rape. If I hadn’t been changed by that circumstance, healed the wound the rapist left me with, and come through determined not to perpetuate a cycle of oppression and wounding, I might never have stepped forward when Rosanna spoke of her desire to hold conversations about race relations.

Each of us has a choice – stay wounded and let the wounds fester, or seek healing and offer that healing to others.