I got tagged by Kristin to come up with five things you might not know about me. If you’ve been reading my blog for awhile, you probably know way more than you want to know about me, since I’m a bit of an open book and I have a tendency toward verbal diarrhea. But here goes anyway…

1. Even though my name is rarely mentioned, I have been “quoted” by hundreds of media sources all across the country and even in other parts of the world. As a professional communicator/media relations person, I’ve written lots of press releases and “media lines” about everything from mad cow disease to world hunger to the commemoration of D-Day. The next time you read or hear that politician or senior bureaucrat so-and-so said such-and-such about this or that, remember that there’s a good chance it was penned by some clever communicator who knows how to “voice-shift”.

2. I love road trips. (Well, almost any kind of trip really, but for now let’s focus on road trips.) I love to drive, even when it’s not a road trip to any particular destination. I could drive and drive for hours and not get bored. I used to go out driving sometimes when I needed quiet time by myself, but now I feel too guilty for burning fossil fuels selfishly. Once in awhile, though, when I’m on my way home from grocery shopping, I “miss” the turn-off and take the long way home.

3. When I was six years old, I completed a 20 (or 22 – I can’t quite remember) mile walkathon, just because I am freakishly stubborn and don’t like to quit. At 40, I am still freakishly stubborn, but I have less to prove, so I don’t know if I’d bother. On second thought, there’s a good chance that, if I got started, you wouldn’t be able to convince me to quit.

4. I don’t like phones. As my husband likes to point out “how can you be a professional communicator and NOT LIKE PHONES?” Weird, I know, but I really don’t. I’m SO happy I no longer need to have a cell phone attached to my hip. If I can avoid using a phone, I will either walk to someone’s office/house if it’s close enough, or send them an email. I’m a much better communicator when I can do it in person or in writing. I would rather talk in front of a room full of thousands of people than use a phone.

5. I once spent a summer dressed as a panda bear at the local zoo. (And you thought those were REAL animals in those cages. Pshaw!) When the pandas were visiting our city’s zoo one year, I got a summer job at the panda photo booth. Half of the time I was the photographer and the other half of the time I was the panda. It was depressingly hot that summer, and I was busy melting in a fur suit with people sitting on my lap. (Come to think of it, I’m pretty sure I’ve mentioned this on another list on this blog, but it’s all I can think of this morning.)

And, because Robin asked, I thought I’d throw in a bonus point. (And, you know, there’s that verbal diarrhea thing.)

6. Robin wanted to know what I do for a living. So, because I am an open book (which you probably occasionally wish you could slam the pages on), here it is. I am the “Director of Resources and Communication” at a Canadian non-profit organization “working to end hunger in developing countries.” (That’s part of the mission statement I just helped re-write.) I lead the team responsible for all kinds of interesting things like public relations, community/church relations, media relations, fundraising, education, and public engagement. On the fun days, I get to travel to interesting countries and take pictures and tell stories of fascinating people who have to cope with hunger but often have greater joy and more interesting stories than many of the people I meet in “rich” countries. On other days, I develop material (brochures, website, posters, videos, press releases, newsletters, etc.) to help the organization communicate hunger issues. On the least fun days, I deal with human relations issues that come with having a staff of nine people. (This is where my phone albatross becomes a bit of a hindrance, because most of my staff lives in other provinces than I do.)

Here’s me on one of those fun days (well, except for the fly that’s trying to crawl into my eye – it may be one of the 5 that committed suicide in my tea that afternoon): 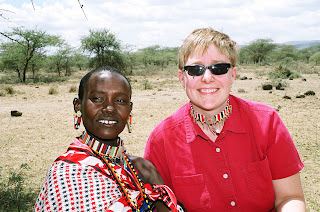 (Kristin – by the way, that’s me in Kenya. I threw that in because you mentioned Kenya in your list of 5.)

Now go ahead, tag yourself. Tell me something I don’t know about YOU.