Liz sent me some interview questions, and though I’ve been a little deliquent lately (not to mention sleepy) I finally got around to answering them…

1) You’ve traveled a lot for work. Is there any one place that you’ve been to that you would like to take your family and go back for a family vacation?

Do I really only get to name ONE PLACE? Hmmm… There are lots of places that I visit and I think “oh man, I would love to bring Marcel and the girls here some day.” But if I have to narrow it down to one place, I will say the Octagon Safari Lodge in Tanzania. It is a magical place with some of the most gracious hosts you will ever meet at a resort. It is owned by an Irish man and a Tanzanian woman. I didn’t meet the woman (she was traveling at the time), but Rory is absolutely perfect for a place like that. He makes you feel like you are his absolute FAVOURITE guest of the year. His staff are the same. After a long, hot, dusty drive, they greeted us with warm moist towels and glasses of fresh mango juice. It felt a little like what I imagine heaven to be. And the surroundings? Oh my, what can I say? It’s near a lovely Maasai village, just on the edge of the amazing Ngorongoro crater (a dead volcano that you can actually drive into, but we couldn’t because we were in a bus and you need a 4X4). It’s not far away from the Serengetti where we saw the most amazing animals by the hundreds.

Here’s a pic of my friend C-L in front of the lovely little cottage we shared at the Octagon. 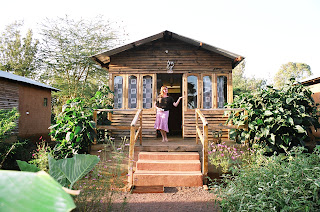 2) If you had a whole day to do anything you wanted to with no restrictions, what would you do?
A WHOLE DAY? Guilt free? Sounds dreamy! One of the things I LOVE to do, but never can find enough time is simply to wander. Just wander wherever my feet take me. That’s why I enjoy my business trips, because in between meetings, I wander around whichever city I’m in. I think if I had a day to myself, I would find places to wander (maybe by bike and by foot). I would stop to sit in a park to read for awhile, or watch the children or ducks or whatever happened by. I would stop in a lovely café for a cup of tea and maybe to write in my journal. Then I would wander some more and maybe end up in a bookstore or art gallery. I’d probably take my camera along and look for some cool artistic shots. At some point, I’d have to end up by water – a stream, river, lake, or even water fountain. I always find myself drawn to water. Perhaps in the evening I would phone my husband or a few of my closest friends and ask him or them to join me in my wanderings and end up somewhere for a late supper and relaxing conversation. It doesn’t sound like much, but it is the PERFECT kind of day to refresh me.

3) How did you come up with your girls’ names? Are they named after anyone?

Because Marcel is French, we tried to find names that could be pronounced equally well in both French and English. Nicole and Madeline are just names we both liked, but Julie is the name of my best childhood friend. Nicole and Julie each have one of my names as middle names, and Madeline has Marcel’s Grandma’s name as a middle name.

4) What is your favorite flower?

Hmmm… that’s a tough one. I think I’m most moved by Spring flowers, partly because they are so refreshing after the long, cold, monochromatic days of winter. It’s a toss-up between lilacs and daffodils. I rarely walk past a lilac bush without stopping and burying my face in the blossoms and breathing deeply of the scent. (In fact, one of the daycare workers walked by the other day while I was doing it, chuckled and said “you always hear people saying you should stop and smell the flowers, but it’s not often you see someone actually doing it!”) And daffodils are just so cheery and “honest”, if that makes sense. (In honour of my dad, though, I have to throw in the lowly dandelion as a runner-up.)

5) How long after you met Marcel did you know he was “the one”?

It’s a bit hard to answer this one, because I really don’t know exactly. I’m not particularly romantic, so I wouldn’t say I ever “fell in love”. It was more like “growing into it”, and at what point I would define it as “love”, I can’t say for sure. It took me awhile, because I’m also not particularly decisive. Plus I knew that I would need to do a fair bit of wandering in my life, and Marcel was more inclined to stay close to home (he’s changed somewhat since then). That being said, I knew almost from the start that he made me laugh and that he made me feel “at home”. It just took me awhile to decide that I would be happier with him than without him. He said “I love you” much sooner than I did, but I eventually came around. I think it was probably about a year into our relationship, after we’d broken up twice and gotten back together again. I may not be quick to make decisions, but once I make them, they stick. I couldn’t imagine living without him now. Plus, I’ve been lucky to find wandering opportunities that always bring me back home to my family.

That’s it for me. Anyone else want to be interviewed? Leave a note and I’ll send you some questions.