After hours of bumping along on narrow rough roads raised high about the flood plains, careening wildly past rickshaws and pedestrians and trucks and bicycle transport vehicles carrying everything from cages of chickens to bamboo poles stretching far ahead of the cyclists, we pulled into the gate of a large complex.

“This is where we will stay,” said our host as we glanced around at our rather puzzling surroundings. Expecting a hotel or guest house, instead we were in the middle of what used to be a large government training centre and housing facility – a place that had long since been abandoned by whoever had envisioned a purpose for this mess of buildings and paths and ponds and fences. It looked a little like a sixty year old university campus that had seen ten years of use and then been left to crumble slowly back into the earth.

“One of the problems we have in Bangladesh,” continued our host, “is that when our government changes, they abandon any projects that were started by the last government in power. This place is a good example of that. Totally abandoned by the government. Some people rent space in some of the buildings, but mostly it sits empty. Nobody cares for it any more.”

In one section of the compound, the army had taken over a few buildings. Soldiers lounged in the shade of an overhanging roof. In another area, the group that was hosting us made use of a few stark-looking offices in a ramshackle building where doors hung precariously on rusty hinges. In another area, we saw signs of people living in parts of a large dormitory. We never learned who these people were or why they lived there. Occasionally, we saw a child playing quietly on a decrepit play structure.

The van pulled up in front of the place that would be our home for the next two nights. Calling it one of the nicest buildings in the complex only slightly raises its merit. It was decrepit. And dirty. And sadly beaten down and unloved. At one time, it had been the home of the training facility’s director and his family, so it showed some signs of past comfort – like a large pillared patio in the front and a small sunroom off the main bedroom – but time and the ravages of too much heat and too many storms and too many bugs and other critters had taken their toll. Broken windows hanging on battered hinges, war era cots on rusty bed frames, layers of dust and mouse droppings – this is what greeted us when we entered.

Perhaps worst of all were the bathrooms. Broken or missing toilet seats (or no toilets at all – just holes in the ground), filthy sinks, signs of human excrement plastered on floors and walls… and the smell. OH the smell!

It took us a long time to go to bed that night. Still suffering from jetlag and too many hours on the road, we were all beyond exhaustion. But none of us felt inclined to venture into the bedrooms. It just felt like too much to bear for our overly-pampered Canadian sentiments. We tried to make light of it, but underneath, there was an unmistakable tone of disappointment.

At some point in the evening, someone showed up to do some rough wiring (the kind of makeshift wiring one can only imagine if you’ve visited a developing country), with the intention of giving us access to electricity in the bedrooms. Ceiling fans were supposed to offer us some respite from the oppressive heat.

Not long after the wiring happened, though, the power flickered off. Standard fare for Bangladesh – just wait an hour or two, it might come back on again. If you’re lucky. We lit candles.

Then the storm started – a storm like I have never seen before. Sheets of rain erased any sign of other buildings across the compound. Wind whipped through the courtyard, bending huge palm trees to their knees. We stood at the open door and gaped at the power of that storm. Was this a cyclone? We’d seen the devastating impact of a cyclone just the day before in a village where every home, animal, fishing boat and many people had been ripped apart and destroyed.

The storm didn’t last long, though, and then it was back to contemplating whether we could actually settle down to sleep on beds that looked like they’d been left behind after a concentration camp closed down. Sleep gnawed at our eyelids, and eventually we could avoid it no longer.

In my room there were 2 beds. I chose the one that looked the least suspect (ie. had the cleanest sheet) and lowered the dusty, tattered mosquito netting. No screens on the windows or doors meant that I was sharing the room with about a hundred mosquitoes. The mosquito net didn’t offer a lot of hope, however, with it’s worn out seams and peppering of holes. I tried to ignore the myriad of blood stains from past visitors.

Before climbing under the mosquito net, I hovered over the seatless toilet while swatting hungry mosquitoes that landed on my exposed backside. I brushed my teeth with water from the bottle I’d brought with me and closed my eyes to ignore the dirt on the sink as I spit into it.

Back in the bedroom, I tried to pretend that the thing that fell from my mattress while I tucked in the mosquito net was not, in fact, a cockroach. With nothing more than candle-light to guide me, I couldn’t be too sure what I saw.

I also tried to pretend that the geckos on my walls would stop their loud clicking noises once I blew out the flame. I was wrong. Geckos can talk all night long. And wild dogs fighting outside your window can sound very much like dying children.

With no bedding other than the dirty sheet and pillow on the bed, I tried to make myself reasonably comfortable on the lumpy mattress. I wrapped a towel around the pillow to give at least my head a clean place to lie.

For the next few hours, I lay with my earphones in my ears, listening to music to try to transport myself away from the discomforts of that place. Thank god for mp3 players. Mosquitoes attacked my head relentlessly, geckos clicked, dogs snarled, hot air wrapped itself around me, and I lay sleepless.

At 3:00 a.m., the power clicked back on and the fan whirred to life. With it, a bright fluorescent light transformed the darkness to stark white daylight. Too much light – I didn’t really want to see how truly disgusting the sheets were. I climbed out from under the useless mosquito netting and tried to find the appropriate light switch. Though there were at least half a dozen switches in the room, none of them extinguished the glare. I tried again. Nothing. I stepped out of the room to look for a switch in the hall. None. I tried all the switches two more times. Still nothing. It seems that when they wired my room, they’d forgotten to wire the light to a switch. I was stuck with the light for the rest of the night.

I climbed back under the mosquito netting and cried.

Eventually, I managed to drift off to sleep for a few brief moments. But then the diarrhea started and I found myself making repeated visits to the seatless toilet in the dirty bathroom.

Morning finally arrived. Relieved, I stepped out of the room to greet my fellow travelers. It was then that I noticed my legs. They were covered with hundreds of red welts. Bed bugs had feasted on my bare skin.

Later that morning, we drove through the village. We saw miles and miles of meager homes – shacks made from bamboo poles and corrugated tin sheets. Some of them had been torn apart by the storm the night before.

After a leisurely boat ride, we stopped to visit a work site where hundreds of men laboured to dig the mud out of the bottom of canals. They were trying to re-excavate the canals so that they could provide better drainage during the rainy season and better irrigation when it was dry. Covered in mud, these men worked tirelessly, lifting baskets of mud on their heads, climbing up the steep sides, and depositing the mud at the top of the embankment. For their back-breaking labour, they were paid w
ith enough grain to keep their families fed each day. Nothing more. 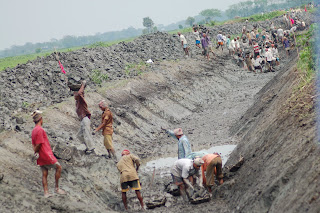 At the next site, the women of the community were carrying the mud that had been excavated from the canals a few days ago, depositing it on the top of roads to raise the roads above the level of the floods that come every year, and patting it down to avoid erosion. Dig mud, fill basket, carry it to the top, dump, hammer it down with sticks, repeat. Endlessly repeat. In mind-numbing sameness day in and day out. 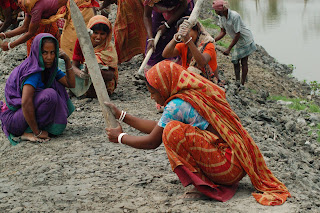 At the end of the day, these people go home to their tin shacks. The women gather their children from wherever they have spent the day and they prepare whatever meal they can muster from what they’ve been paid that week. Rice and perhaps, if they’re lucky, some curried lentils. They eat a few grains of rice with their family, lie down on their mud floors with no mosquito nets, mattresses, or pillows, and they sleep. Probably too exhausted to notice bed bugs or mosquitoes or geckos or heat or cockroaches or fighting dogs. The next morning they get up and repeat the cycle.

When the rains come (which will happen in a few months), they abandon their homes and camp out on embankments until the flood ends. Every year, their homes are flooded, and year after year they have to rebuild their lives. Some years, a cyclone comes and takes with it their children, their homes, and whatever livestock they’ve managed to buy from their hand-to-mouth wages.

That night, back at our accommodations, we ate our meal of rice and two kinds of curried vegetables and fish and fresh bottled water and yoghurt and fresh fruit and tea with sugar. And then we rested under the shade of our sturdy home-away-from-home, where everything had remained dry even in the vicious storm of the night before.

I tried to swallow the shame of my discomfort and complaints.