1. We’re moving offices next week, but I haven’t packed a single box. I’m mastering the art of procrastination.

2. Julie is – true to her nature – delightfully stubborn about what she can accomplish with only her left hand (she’s right handed and that’s the one she broke). She climbed into the tub the other day and I said “call me when you want me to help wash your hair”. A few minutes later, she climbed out of the tub, hair successfully washed and rinsed and no water on her cast.

3. It sickens me that in some parts of the world, little girls have to fear being sprayed with acid on their way to school. We may have come a long way, baby, but collectively, we’ve still got a long way to go.

4. I’m mightily uninspired today. Here I am at #4 and I can’t think of anything else to say.

5. I want to go to Afghanistan, just to sit with those girls with the burnt faces. Just to tell them that other people in the world lament their suffering.

6. I like the word lament. I think we should use it more often. I’m on a one-woman campaign to increase its use – I include it in almost all of my presentations. We need to lament the injustice in the world, and then do something about it.

7. While in Afghanistan, I’d stop in and say hello to Melissa Fung (a woman I haven’t met but have spoken with over the phone in the past). She seems like a calm and courageous woman.

8. I’m so glad that media the world over had enough respect to keep Melissa’s kidnapping a secret until she was released. Despite what we sometimes suspect (at least when it comes to paparazzi), there really IS some honour among journalists and media outlets.

10. I think Barack Obama will make a fine leader, but I wonder how disappointed all of his hero-worshipers will be when he makes his first mistake. With the huge expectations that have been raised the world over (apparently something like 95% of people outside the U.S. wanted him elected), I can’t imagine the weight he’s got on his shoulders.

11. I’ve read 2 great books lately, The Lemon Tree and The Year of Living Biblically. They’re very different books, but the authors share a common and rare ability to write with an open mind and remarkably little judgment or bias.

12. In answer to darien’s question a few posts ago, yes I saw the three churches in Mahone Bay. (Actually, I’m told there’s a total of 5 churches – if you look further into the distance, but three are most prominent along the shore.) I nearly got trapped in a thorn bush when I climbed a barrier to snap this picture. Those branches may look innocent enough, but they’re covered in thorns. 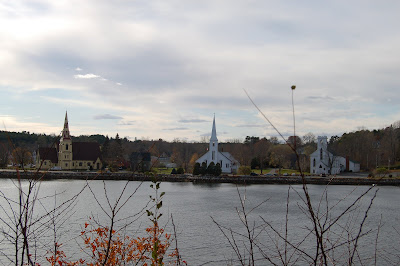 13. My new office has an burnt orange wall (lovely). And I have a huge window that overlooks a shopping mall (weird). I’ll get to watch people do their Christmas shopping. And they’ll get to peer up my skirt if I sit too close to the window.