A journey into authenticity – taking my seat and meaning it

The first time I attended ALIA, I cried my way through the welcoming address. “Bring your vulnerability and your brokenness,” Michael Chender said, and I thought “Yes, I’ve come to the right place.”

I was feeling profoundly broken and exhausted at the time. Things had gotten difficult and discouraging at work and I knew I was no longer in the right place. On top of that, my husband had just gone through a devastating bout of depression that resulted in a suicide attempt, and I felt like there was no place in my life where I was standing on solid footing.

In my brokenness, I found ALIA and the incredible community that is drawn to it every year. When Meg Wheatley asked, in the Leader as Shambala Warrior leadership intensive I was in, what broke our hearts, it wasn’t hard to come up with a list of things. My heart felt like it was broken into a million pieces, all shattered on the floor.

That first time I attended, ALIA helped me begin a long healing journey out of my place of brokenness. Nobody there expected me to gloss over my brokenness, or rush into fixing it. Instead, they honoured it and gave me a safe place to learn and grow and be changed.

The next year, I knew I needed to go back to ALIA, and yet it was difficult to come up with the funds in my first year of self-employment. Happily, I could negotiate a deal with the administration that I’d do some promotional work for them in exchange for a highly discounted registration rate.

I was in a very different place that year, having been through a lot of healing and growth by then. I was happy to be there in a position of service, able to help people by supporting the organizing and harvesting teams.

I was surprised, however, to find that I hadn’t healed as much as I thought I had. I was still feeling quite tender, and, when I ended up in a workshop that focused on play, I discovered that I wasn’t quite ready for play. At the beginning of the Walk Out Walk On leadership intensive, I still wanted to cry instead of play. By the end, though, it was clear that play was what I needed more than I realized. Some of my healing happened through opening the door to play.

One of the most profound moments at last year’s ALIA was the moment when Yolanda Nokuri Hegngi seemed to speak directly into my heart from her place on the stage. “The world needs more people who know how to navigate in the dark,” she said. Yes, that was a calling meant for me. I’d been through the dark and I was learning how to navigate.

When I was honest with myself that second year (more in retrospect after the fact than in the moment), I realized that, as much as I was healing and growing and learning to navigate in the dark, I wasn’t as authentic as I wanted to be. Partly because I was figuring out how to promote my new business, and partly because I had offered to work in exchange for registration, I felt some pressure to impress and make people happy. In the deepest places in my heart, I knew how badly I wanted people to like me. Part of my brokenness from the year before still lingered.

This year, things were much different again. I hadn’t really planned on going. Of course I wanted to, but knew that it would be difficult to come up with enough funds. I’d said a little prayer about it, and then let it go, trusting that if I was meant to be there, I would be.

I’d erased it from my calendar and wasn’t obsessing about it at all. I felt quite relaxed in my letting go.

And then a remarkable email showed up in my inbox the day before it was set to begin. One of my coaching clients, who has found great value in our work together and who I’d encouraged to attend ALIA, emailed to say that she’d missed her flight and wanted to offer me her ALIA registration and accommodations in exchange for some more coaching.

Wow! What a huge offering! Part of me felt unworthy to receive such a gift, and yet another part of me knew that this was the answer to my prayer.

I booked a flight, rearranged my schedule, and within 24 hours was on my way to Halifax. I was overwhelmed but deeply grateful.

Receiving the gift and believing that I was worthy had a huge impact on my state of mind while at ALIA. I didn’t have to earn anything or prove anything or be anything that I wasn’t. I didn’t even need people to like me. I just needed to be present and receive the abundance that had been offered me. Out of that abundance, I could share my own gifts with those I came into contact with, but not in a desperate, needy way.

Before the first morning’s meditation practice, Alan Sloan told us to sit on our cushions with a regal posture – to think to ourselves “I take my seat and I mean it.” His words leapt out at me. I wrote them on my hand, knowing I needed to contemplate them further.

Those words set the tone for the rest of the week. Each day, I was reminded to be fully present in a confident, authentic way, trusting that I was worthy of being there, worthy of receiving abundance, and worthy of offering myself to others in a way that flowed out of my abundance rather than out of my need.

Several remarkable moments followed that reinforced my theme of “taking my seat and meaning it”. In one of those moments, Bob Wing reminded me (through early morning aikido practice) that standing in my power in a grounded, centred way means that I am less swayed by both compliments and insults. In two other moments, people told me that something I’d shared during the course of ordinary conversation might just be the most profound things they’d take home from the week.

On my last evening there, the annual tradition of having an expressive arts performance/participatory plenary took place. At the start, Barbara Bash (who teaches the beautiful, meditative art of Big Brush painting), was painting at the front of the room with Jerry Granelli (a remarkable jazz drummer) accompanying her. She then invited three people to join her at the canvas. I stepped up, knowing how meaningful the experience would be. She gave us painting instructions and we began, while behind us Jerry instructed the audience in the accompanying music they were to create.

It was a beautiful moment that I won’t soon forget. My brush strokes were simply vertical lines on large paper, intersecting with the horizontal line and dots that the others were painting, and yet it felt profound and moving. When I stepped away, the thing that I had focused on with close eyes became a beautiful painting when I viewed it through a wider lens.

Later that evening, Barbara told me how beautiful it had been to watch me paint. “You were just so present in your painting,” she said, “not worrying about what others in the room were doing, but just fully present with your brush”. I smiled. She had no idea how profoundly her words reflected my whole experience of that week.

The next day, just before I left, one of the speakers used the term “confident vulnerability”. That was the second thing I wrote on my arm. It felt like the right thing to go home with.

I returned home at midnight on Friday and the very next day I co-hosted the Horses and Mandalas workshop with Sherri Garrity. I thought that I would be exhausted, but instead I was energized, alive, and very present. Again, I was able to offer of my gift out of a place of abundance and not need or brokenness. I took my seat and I meant it. 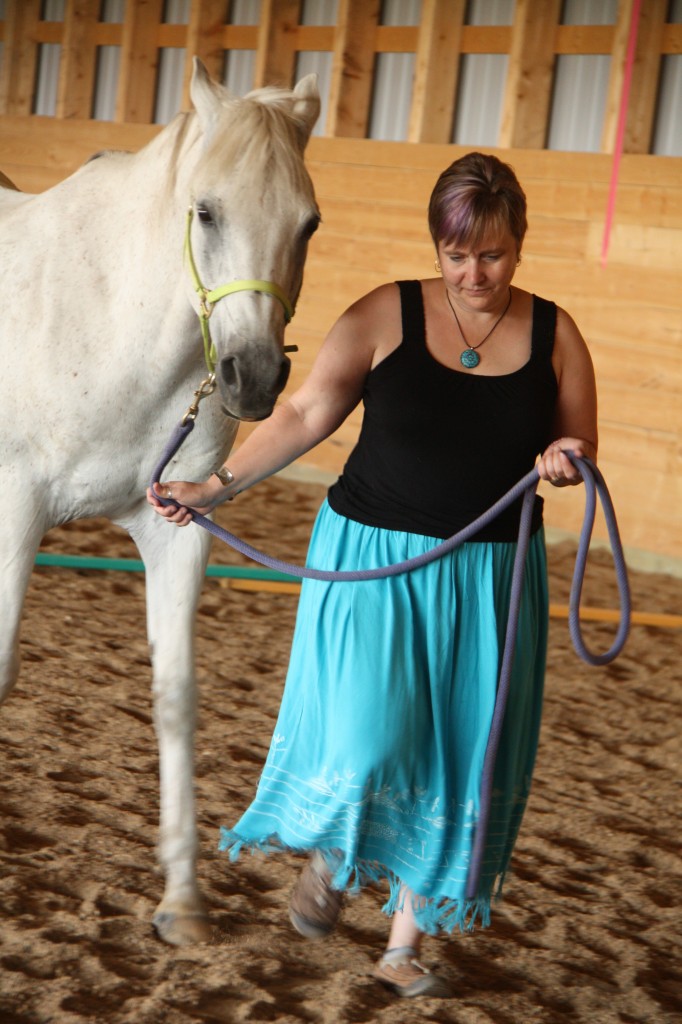 There were two moments in the workshop that Sherri lead us in simply watching the horses in the arena, reflecting on how they impacted us and what we learned from them. In both of those times, one horse stood perfectly still and stared directly into my eyes. He did not back down and in his eyes was encouragement for me not to back down either. “We are connected,” he seemed to say. “Your courage is reflected in my eyes.” He was regal, calm, dignified, and fully confident in the way he interacted with other horses in the herd. You could say he “took his seat and he meant it.”

I later learned that the horse’s name is Fintan. He was a rescue horse who went unappreciated for the first 16 years of his life, bouncing from one place to another and eventually ending up at a horse auction. The owner of the farm where we held the workshop eventually found Finn neglected in a field, skinny, with a sway back, overgrown hooves, and halter sores on his face. Yet, by some miracle, his beautiful spirit was protected and Finn remains sweet, gentle and willing to trust. Finn now teaches people about forgiveness, trust, and triumph. He is beautiful, regal, and demands respect.

Finn chose me, and I know he was meant to complete the lesson that I learned at ALIA. Receive the gift, let the abundance flow through me, take my seat and mean it, and go forth with confident vulnerability.

Thank you Finn and each of the people who touched me at ALIA.

I take my seat and I mean it.