What’s at the centre of the labyrinth? 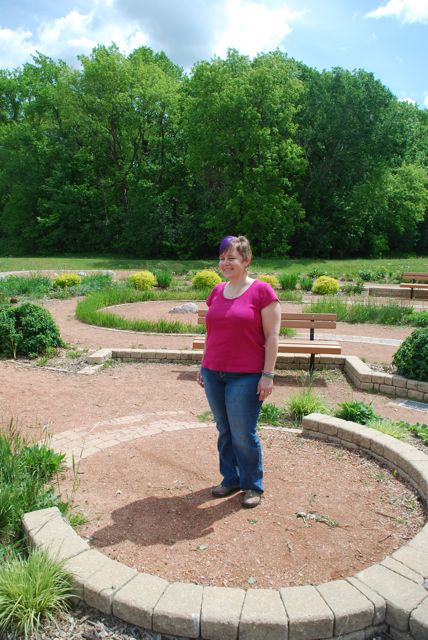 me at the centre, taken by Jo-Anne

The last time I went to the labyrinth, my friend Jo-Anne came with me. She’d never been before and was curious about what drew me so regularly to the park across the river.

At the centre of the labyrinth, there are two benches facing each other. After walking the path, I perched on one of the benches while Jo-Anne stood in the middle with her camera. As we chatted, I saw a look of delight cross her face.

“Have you ever noticed the echo when you stand in the centre?”she asked.

No, I hadn’t. I’d stood at the centre many times, but I was almost always alone and rarely said anything out loud.

“Stand right here,” she said. I joined her at the centre and started talking. Sure enough – the tiniest of echos reverberated from my voice, but only if I stood exactly in the centre.

Trained as a scientist, Jo-Anne was quick to figure out what was causing the echo – the combination of the slight bowl shape of the labyrinth and the benches.

More mystic than scientist, I prefer to think it’s a manifestation of the energy that’s available when you spiral closer to centre. Committing to the journey, trusting the path, you arrive at centre and the God of your understanding, the source of your energy, meets you there in the echo of your own voice.

The truth is, though, there’s nothing really mystical about the labyrinth itself. Pragmatically speaking, it’s just a circular, winding path that someone has lovingly built, filling in the in-between spaces with natural prairie plants (that Jo-Anne knows all the names for and I know only as “the one with wispy pink flowers”), and adding a few benches here and there for comfort. Anyone can build a labyrinth. My friend Diane has one in her back yard.

Yes, there is something sacred about the space, but the same can be said about any space. The easy chair you like to curl up in with your favourite book is sacred too. So is the driver’s seat of your car. Or the lawnchair you bring to your daughter’s soccer games. Or the little patch of garden you faithfully nurture. Sacred simply means that God is there, and… well, God is everywhere. We just have to open our senses and we will see/hear/touch/smell/taste God. (Fill in your own name for God, if you like.)

Jo-Anne is right – there’s a logical explanation for the echo. But that doesn’t mean that the next time I’m standing there I won’t speak words into the labyrinth, hear the echo returning to me, and know that God is there and that my words are imbued with power that I can take with me when I leave the labyrinth.

Sacred space is what we make of it. Sacred space is simply us bringing our open hearts to a place and letting that place be a vessel for Spirit to be in communion with us.

For me, labyrinths are especially sacred because the winding path, the meditation of putting one foot in front of another, the simple slow breathing as I walk, and then the pause at the centre help me move gently into an openness where God can speak. When I stand at the centre, it’s because I’ve been intentional about silencing the voices that get in the way of hearing the still small voice that reminds me of who I am.

I don’t need the echo, but it’s just one more way that God uses science to remind us of Her presence when we’re ready to pay attention.

If you’re curious about labyrinths, mandalas, and circles, join me on June 26th at 7 pm Central for a free call. (More info. in this post.) Register below.