On birds and dying and women’s voices 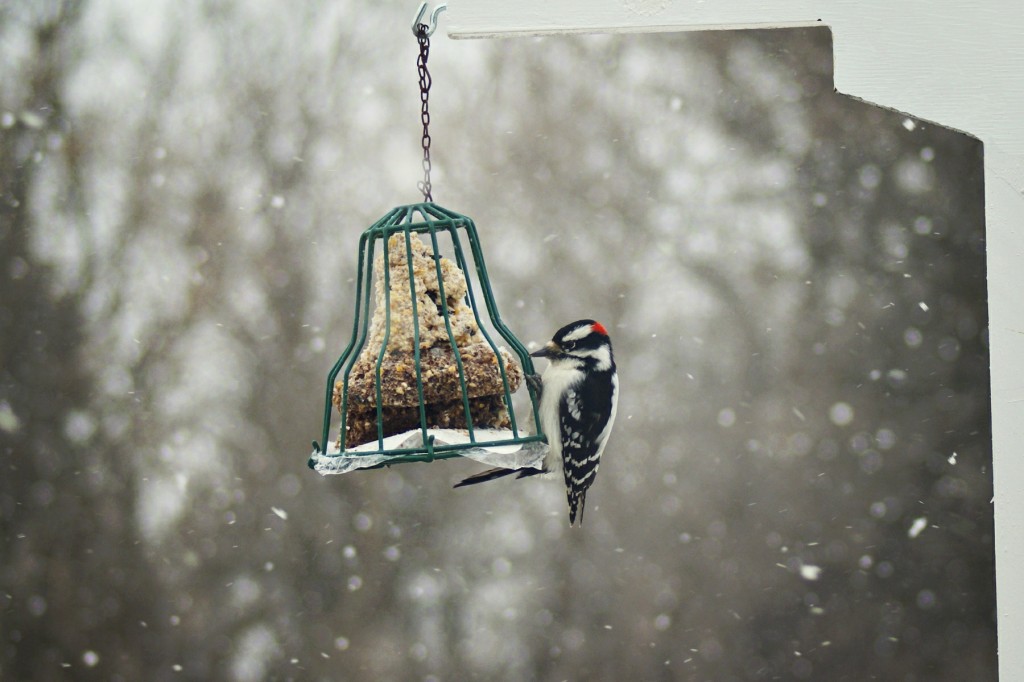 The woodpecker that visited Mom's feeder shortly after she died, photo by my sister Cynthia

In the last few months of her life, Mom spent a lot of time watching birds. I often sat and watched with her, marvelling at the variety that came to visit. We don’t have much of a history of bird-watching in our family, but we do have a history of paying attention to nature. One of the things that came up at Mom’s funeral was that whenever she went on road trips, she always hoped she’d be the first to spot wild animals. I’ve always been the same.

On one of our last visits, my sister and I spotted a large bald eagle perched in a tree not far from Mom’s house. It’s unusual to see bald eagles where we live, so it seemed an omen of sorts – perhaps bearing a message that our lives were about to change.

Two weeks ago, I brought a new bird book to Mom’s house, hoping we’d get to spend many hours leafing through the pages, trying to identify the birds that visit. Mom never looked at it. That was the day she began slipping away.

The next day, I was teaching at the university, but probably didn’t communicate much through my distraction. I kept my cell phone close, knowing I could get a call at any minute. At noon, after hearing from my brother that her health had declined quickly in the last 24 hours, my sister and I rushed out to be with her.

Before going, though, I made a quick trip to the bookstore. My friend Barbara had mentioned the book When Women Were Birds, by Terry Tempest Williams, and I knew that I had to have it. It’s a collection of short pieces on voice that Williams wrote after her own mother died. I tucked it into my purse.

Mom’s health declined so quickly that day that we were certain she would not live until morning. Her strength disappeared, her voice reduced to a whisper, her mind started slipping away, and she stopped eating and drinking. My siblings (two brothers and a sister) and my mom’s husband all sat with her, comforting her, singing hymns, reading her favourite Bible passages, and praying.

She didn’t go that night. Instead, she stabilized and for the next three days, remained essentially the same. There were restless periods when we had to move her from bed to easy chair or back again (she was light enough by then that any of us could carry her), there were many times when her breathing became so difficult we were sure it couldn’t go on, and some moments her mind was more clear and she was able to communicate, but there were never any moments when we thought things were turning around. We knew that any breath could be her last.

For the rest of the week, there was always at least one or two of us at Mom’s side (along with family and friends that visited), keeping vigil, making sure she didn’t try to get out of bed on her own diminished strength, putting ice chips on her tongue when her throat was scratchy, or just holding her hand. During one of those times, when Mom was sleeping fairly peacefully in the bed, I picked up my new book and started reading.

Terry Tempest Williams’ mother told her, “I am leaving you all my journals. But you must promise me that you will not look at them until after I am gone.” After her mom died, Williams found three shelves of beautiful clothbound journals. Every one of the journals was completely empty.

When Women Were Birds is Williams’ meditation on what those journals mean and what it means for a woman to have a voice. All of this is set against a backdrop of bird-watching and bird-listening. Birds, after all, never question whether or not they should sing and they never try to sing in a voice that’s not their own.

Raised in a Mormon home, where women’s voices were often silenced, Williams struggled with finding her own voice and trusting it to speak of those things she cared about. She cares deeply about the natural world and we now know her to have a clear and resonant voice on issues related to environmental abuse, but before she could become the advocate she is today, she had to go through much learning, grief, and growth.

To say that it was profound to read When Women Were Birds at my mom’s deathbed, while I witnessed Mom’s voice and spirit decline and disappear, would be an understatement. There were so many layers of significance going on for me at that time that I can hardly begin to explain what it meant.

My mom lived most of her life without trusting her own voice. Always insecure, she believed she had little of value to say. She was always quite certain that there were smarter people than her who should be listened to, and so she believed her voice meant little. It didn’t help that she was raised in a religious tradition that didn’t encourage women to speak, or that she married two men who were both more confident or sure of their own opinions than she was. What she failed to recognize was the fact that her “voice” came through loud and clear in the great love she offered people. She didn’t need to speak to be a healer of wounded souls.

To be honest, there’s always been some disconnect with my Mom when it comes to trusting my own voice. Though I never doubted that she loved me and was proud of me, she didn’t really understand what I felt I needed to speak of in the world. When I was writing plays, she came to watch, but usually said “it was good, but I didn’t really understand what was going on.” The same can be said for my published articles and blog posts. She always claimed that she was “too stupid to understand”.

In recent years, while I’ve been growing my body of work, I’ve had a hard time sharing what I do with my Mom. Some things – like the teaching I do at the university – was fairly easy for her to grasp, but other things just didn’t make sense to her. For one thing, she remained committed to a Christian tradition that frowned upon women in leadership, so when I started teaching women how to lead with more courage, creativity and wild-heartedness, it didn’t really fit with her paradigms. Nor did it make sense to her that I would seek a feminine divine or a feminine way of looking at spirituality.

Reading the book at Mom’s bedside left me somewhat conflicted.

On the one hand, I was disappointed that I’d never been able to fully share the importance of my work with my Mom. On the other hand, I’ve been taught by her to use my God-given gifts to make the world a better place.

On the one hand, my Mom was never able to fully validate or appreciate my writing or teaching. On the other hand, she’d raised me with so much love that I have the confidence I need to keep doing it without external validation.

On the one hand, I wished I could tell her about the work I’m doing for Lead with your Wild Heart and how I believe it will be life-changing for me and the women who participate. On the other hand, I knew that just sitting there and being present in the grief, without trying too hard to make it something it isn’t, was going to leave me with profound lessons that will enrich my teaching for years to come. And I knew that some of my wild-heartedness had been learned by watching her.

There have been times, in the last year and a half since Mom received her cancer diagnosis, that I’ve felt sure that I’d need to resolve some issues with my Mom. I thought I’d need to have a few more heart-to-heart talks with her before she died, finally helping her to understand where my views are different from hers and why I feel called to do this work that I do. But then, in recent months, that began to soften. I no longer felt the need for resolution. Instead, I simply felt the need to be there, to sit with her and enjoy her presence and bask in her love in those final months. 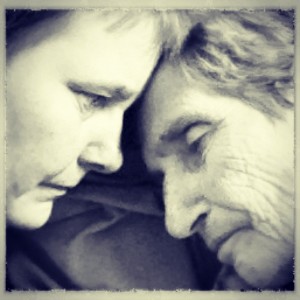 Once, when Mom was sitting in her big easy chair, she turned to me as if to communicate something. I leaned in to hear her whisper, but she didn’t speak. Instead she put her hand on my head and held it there while she looked deeply into my eyes, like a priest offering a blessing. My eyes filled with tears.

Another time she became restless and I thought she wanted to be moved, so I bent my head and prepared to pick her up. Instead, she wrapped her arms around me and kissed the top of my head several times, and then she smiled. I smiled back.

By Thursday, I was pretty sure she was slipping away. Her eyes had become more distant and she spent less and less time in the plane of reality that the rest of us remained in. By then, we were ready to let her go. I went home that night for the first time, hoping to get a few more hours of sleep. Around three, when my brother Dwight and sister Cynthia were sitting with her, she became suddenly more clear and happy than she’d been in a long time. “I made it!” she said. “I’m here!” When Dwight asked if she was in heaven, she said “yes!” And then it seemed like she was being introduced to people who’d passed before her.

At 4:00, they called me and woke my brother Brad. I rushed to her house, hopeful that a deer wouldn’t jump out at me on the dark highway. Instead, a ghostly bird fluttered through my headlights. By the time I got there, she’d already died. She stopped breathing for a few minutes, but when Cynthia said “oh Mom – you were supposed to wait until Heather got here!” she started up again. When I arrived, she was breathing but in a coma. There was no more life in her eyes. I sat with her for a few hours, and then as morning came, her breath became more and more fluid-filled. At 8:26, she finally stopped.

Shortly after that, a woodpecker came to Mom’s feeder and Cynthia snapped the photo at the top of this page. A few days later, the day we buried Mom next to Dad in the small town where we grew up, Cynthia spotted another bald eagle.

This week, I am back at work, writing more lessons for Lead with your Wild Heart. No, it’s not something my Mom understood, but that’s okay. I know that I have her blessing to use my gifts and share my voice, and this is what I am called to do.

Like a bird, I will go on singing, and the grief in my voice will only make it richer.

“Once upon a time, when women were birds, there was the simple understanding that to sing at dawn and to sing at dusk was to heal the world through joy. The birds still remember what we have forgotten, that the world is meant to be celebrated.” – Terry Tempest Williams