What if I have courage? 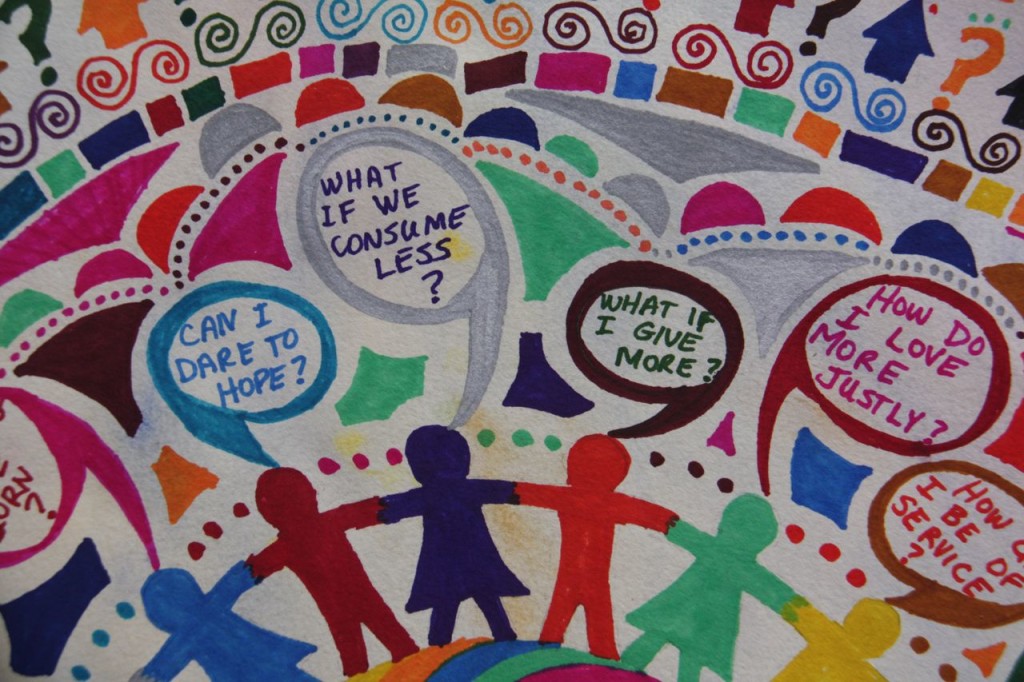 Three social scientists once conducted a series of experiments to determine which was more effective, “declarative” self-talk (I will fix it!) or “interrogative” self-talk (Can I fix it?). They began by presenting a group of participants with some anagrams to solve (for example, rearranging the letters in “sauce” to spell “cause”.) Before the participants tackled the problem, though, the researchers asked half of them to take a minute to ask themselves whether they would complete the task. The other half of the group was instructed to tell themselves that they would complete the task.

In the end, the self-questioning group solved significantly more anagrams than the self-affirming group.

The researchers – Ibrahim Senay and Dolores Albarracin of the University of Illinois, along with Kenji Noguchi of the University of Southern Mississippi – then enlisted a new group to try a variation with a twist of trickery: “We told participants that we were interested in people’s handwriting practices. With this pretense, participants were given a sheet of paper to write down 20 times one of the following word pairs: Will I, I will, I, or Will. Then they were asked to work on a series of 10 anagrams in the same way participants in Experiment One did.”

This experiment resulted in the same outcome as the first. People primed with “Will I” solved nearly twice as many anagrams as people in the other three groups. In follow-up experiments, the same pattern continued to hold. Those who approach a task with questioning self-talk did better than those who began with affirming self-talk.

I’ve been intrigued with this research ever since I heard about it a couple of years ago. Because of it, I often invite my coaching clients to create question mandalas rather than setting goals or developing strategic plans. Questions tend to release possibilities in us in ways that goals and declarations do not.

Lately I’ve been playing with this idea again in the area of courage. There are some areas in my life in which I know that I am still letting fear keep me small. I am conflict-averse, and so I shrink back and avoid challenging people when I know that it will make me feel uncomfortable. This has been cropping up in my teaching lately, where I’ve had to challenge some students for plagiarism and other unacceptable behaviours. I cringe any time I have to deal with these situations, and yet I know that I am not doing my students any favours by simply avoiding the tough conversations.

I also still deal with some fear around creating controversy in my work, or teaching things that people don’t like to hear or just don’t receive well. There’s a scared little child inside me who just wants to be liked, and I’m trying to coax her out of her hiding place into a bigger life.

In my effort to build my courage, I decided to use the question technique. Instead of telling myself “I WILL BE COURAGEOUS” each time something fearful shows up, I simply ask myself “Can I be courageous?” Usually the answer to that is “yes”.  I carry enough courage stories with me that I can remind myself of times in the past when I’ve been courageous, so I know it can be done. Then, before I take any action, I sit with it a bit more and ask “what will happen if I am courageous?” and I play the scenario out in my mind. I play with the best that might happen and I play with the worst. Usually I realize that the worst is not as scary as I think it will be. If it still seems pretty scary though, I ask myself “can I live with the consequences of this action?” And again, usually the answer is “yes” because my story basket is full of reminders of the tough things that I have lived through in the past.

Almost every time I’ve done this little run-through in my mind, I’ve been able to step into the courageous act more boldly than I expected. In the past week, I’ve been in several of those uncomfortable situations, and each time, I’ve had more courage than I usually do.

And you know what? When I’ve had courage, shored up not by my resolve but by the stories in my story basket, people have almost always responded positively instead of defensively. The question approach not only gives me more courage, it gives me more grace in that courage. Resolve makes me more forceful, questions make me more open. People respond well to openness.

If you want to try the question approach to courage, here’s how to get started:

1. Fill your story basket with stories of courage. Take some quiet time with your journal and write down the stories that come to you when you ask yourself the question, “when have I had courage in the past?”

2. Fill your story basket with stories of resilience. Again in your journal, ask yourself, “when have I lived through difficult situations and survived and thrived?

3. The next time fear shows up, pause for a moment and ask yourself “Can I be courageous”? Reach back into your story basket and pull out the stories that remind you that you CAN.

4. Ask yourself the next question, “What will happen if I am courageous?” Run through the story each way – the best that can happen and the worst. (If you have the time, you may want to journal about this, but you can also run the scenarios in your head.)

5. When you’re sitting with the worst that can happen, ask yourself, “Can I live with the consequences of my actions?” Reach back into your story basket and find the stories of resilience that tell you that YES you can survive the worst.

6. Bonus question… Ask yourself, “Will I be happier if I am courageous or if I shrink from this in fear?” I think you already know the answer to this.