On letting go, forgiving, and healing our wounds

“Everything can be taken from a man but one thing: the last of the human freedoms — to choose one’s attitude in any given set of circumstances, to choose one’s own way.” – Viktor Frankl 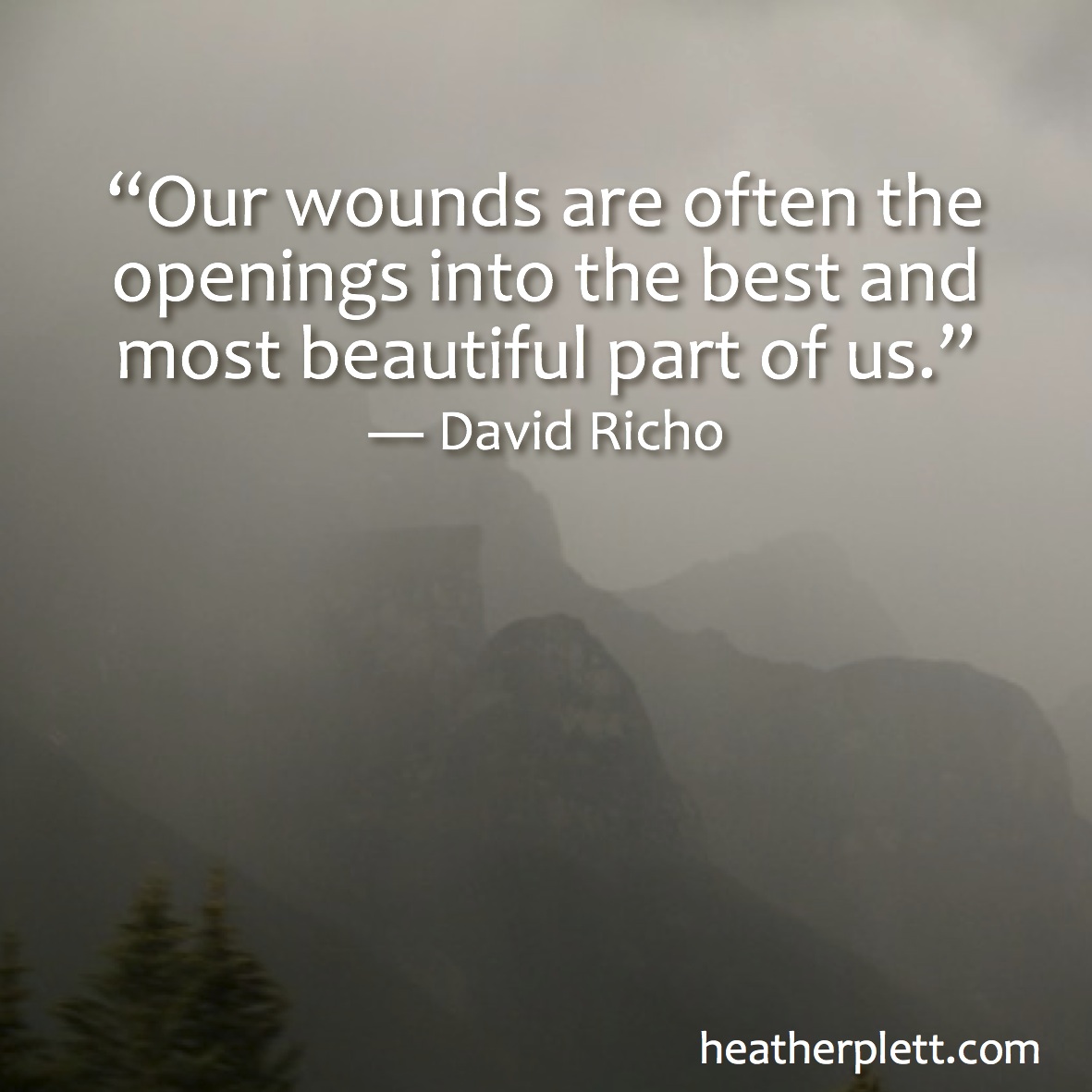 After last week’s post about serving as wounded healers, I received a thought-provoking email from a reader.“I have been wondering a lot about the language surrounding letting go, moving on, and forgiving. The way the phrases come out seem misleading to me. I mean, how does one just simply choose to forgive, or let go when there is a big part that just isn’t willing to do that yet even though we want to? We can intellectually get why and how, but doing so is almost an entirely different thing.”

I have been thinking a lot about his question ever since. Even after I sent a response to his email, I kept wondering what else there might be to say. Is “letting go” a one time decision, or is it a daily commitment? Is it possible to “let go” entirely, or is it more true that we loosen our grip for awhile until something unexpectedly triggers us and returns us to that wound for another (hopefully deeper) healing journey?

In last week’s post, I made reference to the time a man climbed through my window and raped me in my bed. After years of seeking healing for that wound, I’d like to think that I’ve let go, moved on, and forgiven that man, but in truth, I am still occasionally triggered and the old wounds come back to haunt me. Last Fall, for example, when Tina Fontaine’s body was found in the river near where I’d lived at the time, and then, a few months later, Rinelle Harper survived a similar attack, I found myself triggered once again. Around the same time, it was revealed that Jian Gomeshi, a celebrity in Canada, had been sexually assaulting women for years and getting away with it. I found myself angry, shaken, and some days nearly unable to get out of bed.

Have I let go? Have I healed? Have I forgiven? Yes… and no. I have worked through much of the pain, I have grown immensely from the experience, I have learned to trust people again, and I have used the experience to help me serve as a more compassionate wounded healer. And yet… I can still get angry, I can still fear intimacy, and I can still allow some of the emotional wounds to change how I treat my own body. Last Fall’s triggering taught me that I still have more layers to heal in this story.

So… does that mean that we can never be fully functioning members of society because we are all always carrying around old wounds? No, that’s not it at all. Our wounds change us and become part of our stories, but they do not define us nor do they own us. Though healing may be a lifelong journey, we are still responsible to do the work and to offer the gifts of what we’ve learned to others.

Here are some of my thoughts on the healing journey…

1.) Life is more like a labyrinth than a linear path. A labyrinth journey takes you toward centre, but it never takes you directly there. First you wind in and out, sometimes close to centre and sometimes far away. Life is the same way. Sometimes you feel like you’ve reached your goal and that your wounds are healed, and then suddenly the path turns and you are once again wandering in a wasteland of doubt and despair. That doesn’t mean you’re doing it wrong, it simply means that you have more to learn from the place at the edge of the circle.

2.) Pain can be our greatest teacher, but we have to allow ourselves to feel it in order to learn its lessons. We can’t short-circuit the learning that grief and struggle bring to our lives. When we try to ignore it by staying busy or dull it by turning to substance abuse or avoid it by pretending we can simply return to life as usual, we simply put it on hold and can expect that it will surface again later in life in an more urgent and unhealthy way.

3.) When we are mindful, our wounds have less ability to control us. In mindfulness meditation (my limited training comes mostly from the Shambhala Buddhist tradition), we are taught not to try to stop the thoughts, but to witness them and simply let them pass. The same is true for how we should treat our anger, judgement, fear, etc. We shouldn’t try to shut it down or deny ourselves the experience of it. Instead, we have an opportunity to witness it, inquire into it (What is this moment teaching me? What do I still have to learn from this emotional experience? What is the fear hidden beneath my anger?) and then allow it to pass. (I intentionally say “allow” it to pass rather than “let it go” because allowing is less about our control and more about acceptance.) That doesn’t mean it won’t come back again, but when it does come back, it has less ability to debilitate and control us.

4.) Those who search for meaning in any situation are better able to heal from it. Is there a reason for the suffering in the world? I don’t know. It’s hard to justify the suffering caused by the earthquake in Nepal, for example. There may not be a cosmic reason for it, but that doesn’t mean there isn’t meaning for each of us as we live through the suffering. As Viktor Frankl reminds us, in Man’s Search for Meaning, those people who were best able to survive the atrocities of the concentration camps during the Second World War were those people who found meaning in their suffering. “Between stimulus and response, there is a space. In that space is our power to choose our response. In our response lies our growth and our freedom.”

5.) As wounded healers, we can offer healing even if we’re still on the healing journey ourselves. Although it’s important to work on our own wounds first (so that we don’t use those wounds as an excuse to inflict more wounds on others), we can’t wait until we are “completely healed” to serve the world around us. There is no such thing as “completely healed”. Instead, there are those who are further along the healing journey than others who reach back and offer compassion and guidance to those behind them. When I started teaching, I adopted as my mantra George Bernard Shaw’s quote… “I’m not a teacher: only a fellow traveler of whom you asked the way. I pointed ahead – ahead of myself as well as you.” Change the word “teacher” to “healer” and it still applies.

6.) Our wounds make us beautiful. Mark Nepo shares the story of a brokenhearted young woman who finds an old man in the woods. When she shares her story of heartbreak with the man, he tells her the story of how each of us is like a flute and each time we are wounded, a new hole is carved into us. ‘It is a simple fact that a flute can make no music…if it has no holes,” says the wise old man. “Each being on earth is such a flute, and each of us releases our songs when our Spirit passes through the holes carved by our life experiences.’” No two flutes have the same holes and therefore no two flutes make the same music.

If you’ve been wounded and are on the path to healing, remember that you are beautiful, right now, exactly as you are. This healing journey will bring you many gifts that are needed for the healing of this world. Be mindful, search for meaning, and let yourself be changed.

Note: I’d like to dedicate one post a month to wrestling with readers’ questions, so if you have been contemplating something that you’d like me to talk about, simply add a comment with your question. I don’t promise “answers” or “solutions”, I’ll simply offer my thoughts from my place on the journey.