The long journey to healing 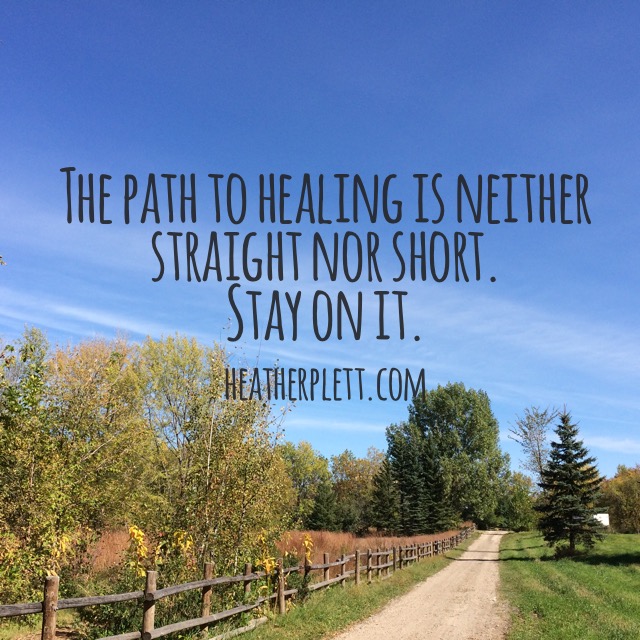 As a coach and facilitator, I have the honour and privilege of walking alongside people on the journey to healing and transformation. As I hold space for them, they teach me many things.

One of the most important things I’ve learned in this work is that the journey takes time – sometimes many years – and cannot be rushed. I’ve also learned that each person’s journey is unique and what works for one person may not work for another.

This week, during the Open Heart, Moving Pen online writing course, one of my clients (who prefers to remain anonymous) shared a story she’d written that moved me (and other course participants) deeply. Not only is it a powerful story, but it marks a profound transformation for this particular client. She started working with me a year ago (as a coaching client and workshop participant), and the work she has done since then has been awe-inspiring and exciting to witness.

BUT… none of this happened overnight. According to her, “it’s actually been 7 years of really deep work with 15 years of healing work before that.”

She is ready to do beautiful healing work in the world because she focused on her own healing work first. Like a butterfly emerging from a long time in the chrysalis, She is bursting forth with strength and beauty as a writer, leader, and healer.

She asked me to share what she wrote because “it wants to be out in the world, and is not letting me do anything else until I send this off.” It’s a very personal story and she’s not quite ready to attach her name to it, but if it moves something in you, I welcome you to send me a note and I will pass it on to her.
Here it is. I offer a trigger warning as some of the content may be hard to read.

The complicated stories of my past

Why am I not more enraged by this talk about grabbing pussy? Why does it seem normal for a man to take what he wants from a woman?

I know the answer, but don’t want to admit I was taught that’s the way men are.

My dad, the one person in my life who liked spending time with me, enjoyed my company, talked to me like I was an adult. My dad, who taught me how the world works, at least what he’d figured out so far. His one cardinal rule: men cannot help themselves when they see a beautiful woman (or young girl). If they’ve got an urge, they WILL satisfy themselves with whoever’s available. If it doesn’t hurt, if it’s not penetration, it’s OK, it won’t cause any problems, and besides, she LIKES it….

I don’t know which was worse, the fact that he had me caress and lick and suck him, or the fact that he stroked me and my young body responded with pleasure. Just like when he tickled me ruthlessly and insisted that I must like it because I was laughing. He could see my body reacting to his stroking and it confirmed his belief that since I was enjoying the intimate contact, it was harmless.

Equally harmless, in his opinion, was his dalliance with other women. What’s a quick tumble with his secretary on her desk to a preschooler who’s already been a participant? “Don’t worry about her” he said when the secretary looked at me with concern, “She won’t care. She’s seen it before.”

Here’s the thing, this man was the one person in my life who treated me like a person (when he wasn’t treating me like a sex object, of course). Everyone liked him. He was a favorite professor of many students, always making time to help them get through their coursework. He was proud of the diversity of his small department. He annoyed his antsy daughter and anxious wife by starting up conversations with workmen, secretaries, garbage men, everyone he met. In addition to being his precious daughter and best friend, he treated me as the son he never had, teaching me woodworking, basic car repair, how to throw a ball.

After his death several women told me how he was the one adult in their lives who listened to them when they were young, asked questions about their lives, made them feel important. None of them mentioned any sexual behavior on his part; either it didn’t happen with them or their memories of the contact were overshadowed by being seen and validated by an adult. Given my memories, I’m suspicious that it was the latter; when there is no closeness in a young person’s life, the touching is simply a price to be paid for closeness.

To this day, and he’s been dead several years now, I sense that his spirit still doesn’t understand that what he did was wrong. He knew to tell me to keep it a secret, he knew my mom wouldn’t approve, but he was convinced that it was OK, at least until I neared puberty. At some point before puberty he did stop the incest (and that was in some ways agony, because I suddenly lost the only intimacy in my life and I felt deserted), but he continued to teach me. When we watched TV he would repeatedly point out how the women were dressed and acting, and that they deserved whatever attention they got from men. He also taught me that men are weak and easily wounded, that they need women to take treat them gently so they don’t fall apart.

So I learned that being feminine is dangerous: that high heals, makeup, clothing that shows any skin or cleavage, are come-on signals and will get full attention from men. And that if I talked back or resisted they would be devastated and it would be my fault.

I cannot hate this confused man who raised me and confided in me. Though I did hate him when the memories first started surfacing, I now pity him, and love him, and thank him for helping me understand the mentality of confused patriarchal men trying to make sense of the world. And I wonder… If my dad could do this, how many other girls (and boys) had similar experiences with otherwise kind men?