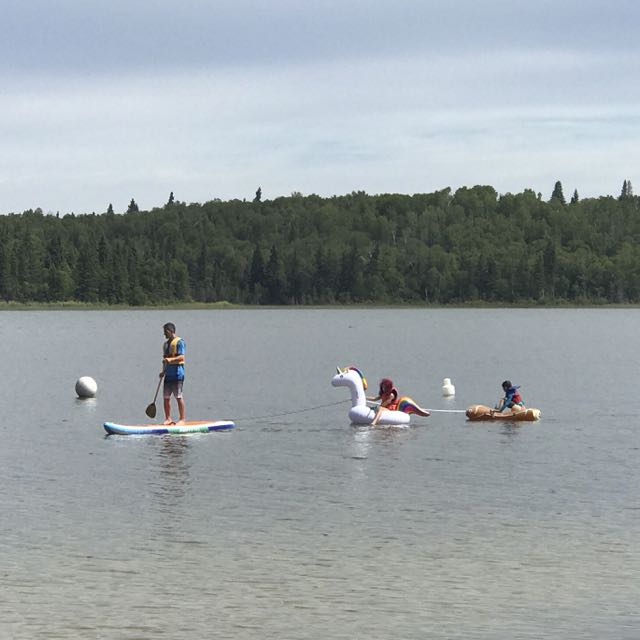 I was sitting at the beach with my journal recently, while on a private writing retreat with a friend. It was a perfect summer morning, with the kind of blue sky painted with white clouds that makes the world seem a little easier to navigate.

I was alone on the beach until a curious flotilla entered the scene from further down the shore. A man on a paddle board was pulling behind him two children – a young girl with purple hair on a floating unicorn, and, behind that, a younger boy on what looked like a plastic replica of Tom Sawyer’s raft. Despite his passengers, the man paddled and navigated with ease on the smooth lake and the entire flotilla soon landed on the shore where I sat.

As they approached the beach, I heard one of the children ask whether they could go further out from shore. “No,” said the man, who was clearly their father. “If we’re too far from the shore, we might get caught by the wind and drift all the way to the other side of the lake. Then we’d have to walk a few miles home.”

Climbing off their flotation devices, the children clamoured onto the beach for some play time. They explored the beach and the young boy tried to entice his sister to build a sand castle. “No,” she said, “not right now.” Instead, she followed her dad to where he’d discovered animal prints in the sand. “Deer,” she said, when he asked what she thought they were.

Before long, the dad asked if they were ready to go out again. “Yes,” they both said. “But can we go out a little deeper first so that it’s easier to climb on?” asked the girl. Her dad obliged.

On the way out, the boy asked if they could go close enough to touch one of the buoys that marked the edge of the swimming area. “It’s not easy to steer,” said the dad, “but I’ll try.” He was successful and the children both touched the buoy.

They disappeared down the beach, but a little while later, they were back within my view. This time, Dad was taking a rest from the paddling and was sitting on his paddleboard. Both children had joined him on the board, and they were trusting the gentle waves to do the work of bringing them back to shore. Soon, though, the girl was ready to climb back onto her unicorn and the boy followed suit, back onto his own raft. Dad stood up to paddle again and reminded them that they’d have to stay close to shore so that they’d be safe.

When a motorboat whizzed past and the wake rocked their flotilla, the girl said “boats are evil.” Sure enough, she was knocked off her unicorn into the water. She was wearing a life jacket, though, so she wasn’t in real danger. A man on a canoe close by called out, asking if everyone was okay. All three respond that yes, they were fine, but they appreciated the offer of support. Dad on his paddle board didn’t seem phased by his daughter capsizing – instead he watched as the young boy helped his sister climb onto his raft. They sat together for awhile, until the girl was ready to return to her unicorn

As I was watching this unfold in front of me, I became amused at the metaphor and started recording the scene in my journal. Here’s what it taught me about leadership and holding space: