Your discomfort won’t kill you 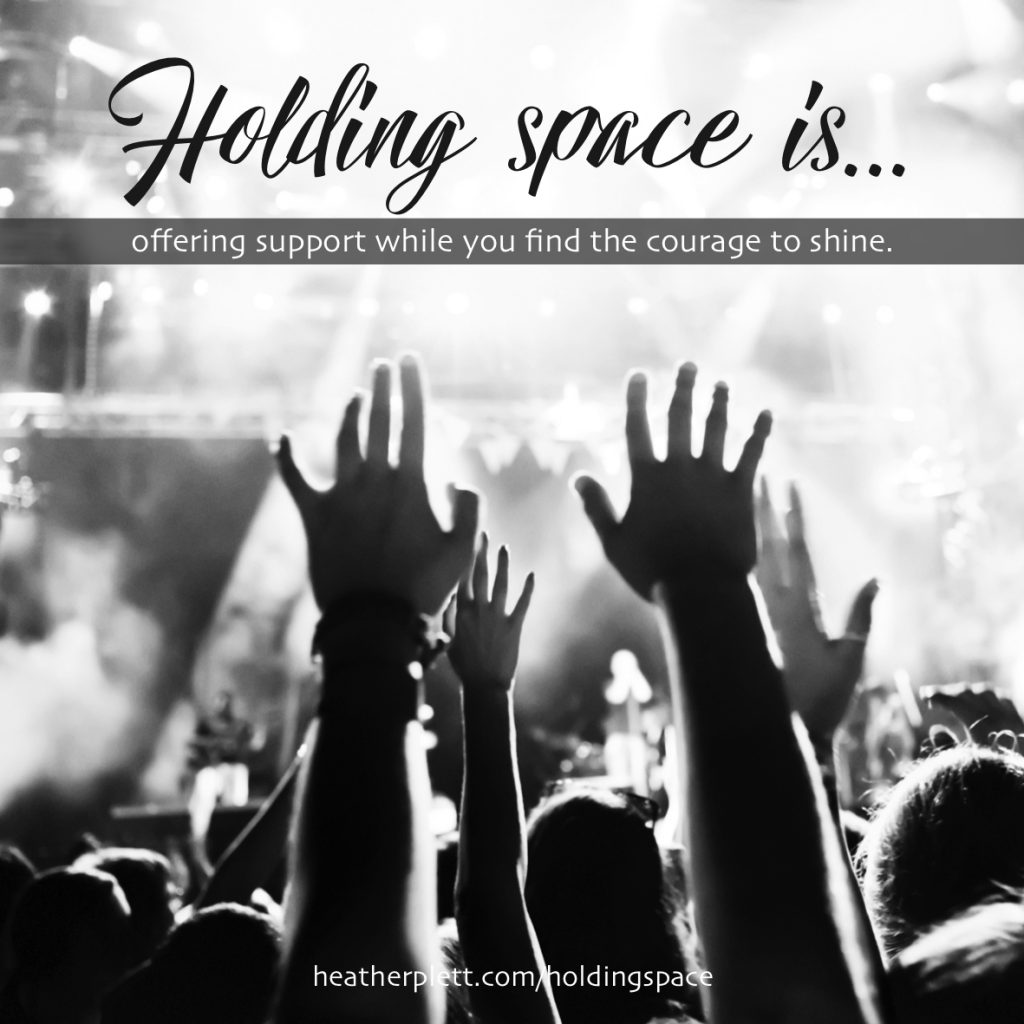 Yesterday morning I was in an emotional tailspin. The night before, at the end of a long day of coaching clients, I made a couple of mistakes that were pointed out by people and it put me in a shame spiral. And then, partly because I was already fragile, another person’s actions annoyed me and I landed in an anger spiral that resulted in me saying some words I shouldn’t have.

I could just chalk this up to jet lag and excuse myself for it all by saying that I’m still adjusting to being home and that I jumped into client work too quickly after the intensity of facilitating three retreats and I should have known better than to interact with people who challenge me after a full day of coaching… but that would largely be me letting myself off the hook for bad behaviour. All of those things are true… but there’s also something else for me to consider in this. It’s what I tell my clients all of the time…

My discomfort will not kill me.

Making mistakes won’t kill me. Getting angry won’t kill me. Having to clean up from my mistakes won’t kill me. If anything, those things will make me a little more resilient and help me grow. And I am reminded, once again, that when I insist on self-care and periods of quiet and introspection after doing intense work far from home, it’s not only for my own good, but for the good of those impacted by my moods.

Today I’m not talking to any clients and I’m going to be gentle with myself. And I’m going to make retributions for some of the mistakes I made yesterday. And I’m choosing not to hide the shame bits because there is worthwhile learning in them.

I used to run from discomfort – try to numb myself from it in any way I could. Shut down the anger, eat away the shame, distract myself from the pain, lash out when I needed to blame someone other than me. I was too scared to look inside of it, too scared I’d see only ugliness in the shadows.

I still hide sometimes (hello Netflix, my favourite distraction) but I’m learning, gradually, to stay more present in it, breathe/pray/dance/journal my way through it, until it begins to crack open and I find the gems in the shadows. It takes less time to shift than it used to – I still got a reasonable night’s sleep the night before last, despite the places my spiralling brain wanted to take me. I will survive. I can see my own shadow now without letting it consume me.

Though I might not like it, discomfort is one of my greatest teachers. In fact, I’m not sure if I ever learn anything worthwhile without at least a little discomfort.

Discomfort became fairly central to one of my retreats last week. It’s usually at least somewhat present at all of my retreats (because I encourage people to stretch themselves), but at this one we had an opportunity to go deeper with it than usual.

The retreat was about holding space for others, and each of the retreat participants had been given an assignment that, on the fourth day of the retreat, they would practice holding space for the group. On Saturday, each person signed up for a 45 minute slot when they could host a conversation on a topic that mattered to them, teach us a movement/art/meditation practice that would help us hold space for ourselves, or find some other creative and meaningful way of helping us explore what it means to hold space.

Few people go on retreat and expect to do some of the hosting/teaching themselves, so there was, not surprisingly, some resistance and discomfort. Some handled it with humour, some shut down with anxiety, and some pushed back against me. None of it was offensive (they were genuinely good-hearted and emotionally mature people taking ownership of their own responses), but I could sense the work they needed to do in order to step forward into their own leadership.

I assigned this work not because I wanted the easy way out (ie. a day of no teaching), but because I knew that they would leave the retreat with more skills if they practiced what they were learning in a safe and supportive environment. And I knew, from personal experience, that working through their discomfort would be good for them in the end.

At the beginning of all of my retreats, I introduce participants to the concept of “brave space”. “While we will work together to make this space safe for everyone,” I say, “I prefer to talk about ‘brave spaces’ rather than safe ones. Sometimes, when we focus on safety, we’re actually focusing on comfort, and we don’t take risks or face challenges with bravery. While you are here, I want to encourage you to be brave, to have conversations that challenge you, to face the shadow in yourself when it shows up, to look after yourself in radical ways, and to dare to re-engage even when things get difficult.” (Note: click on the link above to learn more about where this concept emerged.)

I follow that up by saying “this is also a consent-based environment. While I will encourage your bravery, and may nudge you past comfort, I also promise to accept ‘no’ as an answer. You alone know what you can handle and I invite you to take responsibility for where your boundaries need to be and what you’re not willing to consent to.”

Thirdly, I say (in the words of my teacher, Christina Baldwin) that “in this space, we ask for what we need and offer what we can. That means we are each invited to honour our own needs, look after ourselves, and respond as well as we can to other people’s needs. We will practice reciprocity, step into our personal leadership, honour boundaries, and do our best to make this space both brave and safe for all of us.”

When I assigned the participants at this retreat the task of hosting a 45 minute segment of our Saturday, I encouraged them to step into brave space. “This is your chance to push past your comfort zone, to try something that might feel too risky at home where you’re surrounded by people who know you. In this environment, where people are committed to holding space for each other, dare to push through your discomfort to find your bravery.”

When Saturday arrived, the air was charged with a mixture of anticipation, excitement and fear. I knew it would be good, but of course I also had moments of doubt, wondering whether it might backfire. Would people hate it and hate me and leave the retreat with a bad taste in their mouths? Would we have enough energy to support nine people’s individual steps into courage? Would it be repetitive if too many sessions were similar? Would those with anxiety simply shut down and not be able to participate? How would I support them if they did?

You can probably guess how it all played out. The day was brilliant. People were courageous and supportive and creative and inspiring. We had nine very different sessions, each one of them keeping us engaged and inspired. We made art, we learned movement practice, we had an honest conversation about creating more inclusive space in women’s circles, we learned a beautiful Maori greeting (hongi), we practiced mindfulness, and we played. It was one of the best days I’ve had in a long time.

On Sunday morning, after the last session, I invited everyone to participate in a ritual to mark what had transpired. On a piece of paper, each person wrote down what they wanted to honour themselves for and what commitment they wanted to make to themselves for the future. They then carried the piece of paper into the labyrinth, and placed it on a cairn of stones at the centre. When they emerged from the labyrinth, I offered each one a personal blessing, reflecting on something I’d witnessed in them during the week, and then, if they chose, they could step over a line on the ground that marked the crossing of a threshold into whatever would come next. 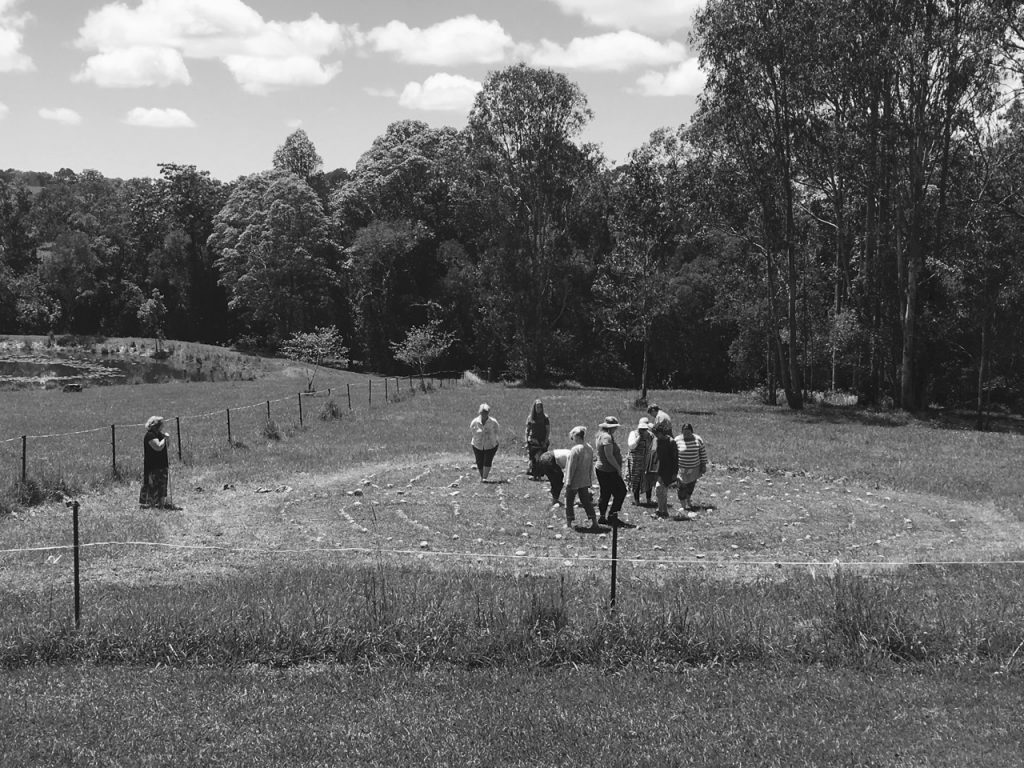 Standing at the edge of the labyrinth was a beautiful experience. There was energy and excitement mixed with contemplation and some fear. There was commitment and resolve and courage and fierceness. There were tears and there was laughter. There was humanity and humility and hope. That labyrinth served as the container for the complexity of all human emotions, while I “held the rim”.

Rhonda, one of the retreat participants, later said this of the labyrinth experience… “I realized at that moment, at the center of the labyrinth, everything that I had always sought, chased, pursued, agonized to find and discover in my own life and purpose was already within. I just need to accept it. I felt God look at me with the biggest smile and say ‘It’s about time.’ It was a most defining moment. I feel like I am no longer living ‘from’ my history.”

Later that day, it was time for us all to depart. As I looked around the circle of women, I couldn’t help but notice the difference from just a few days earlier. These were courageous, strong women who were now a little more aware of their own courage and strength. They had worked through their discomfort, trusted each other to hold space for their fear, and emerged triumphant.

The good-byes from that retreat were different from what they often are at retreats. People were ready to go home. They were ready and excited to step into what was next. Unlike what often happens at the end of retreats, they didn’t seem to have the need to cling to the comfort and warmth of the circle that had held them. Though they valued the support of the group, they stepped away with a sense of self-reliance.

They had come as learners and they were leaving as leaders.

They had chosen not to let their discomfort keep them from finding their courage. I can hardly wait to see what they are capable of!

Today, while I consider what to do with the discomfort I faced a couple of days ago, I make a new resolve to step into courage because I have the memory of those women to inspire me.

Sign up for my six month Holding Space Coach/Facilitator Program to learn more about what it means to hold space.