How our sameness leaves us blind: a reflection on diversity and inclusion 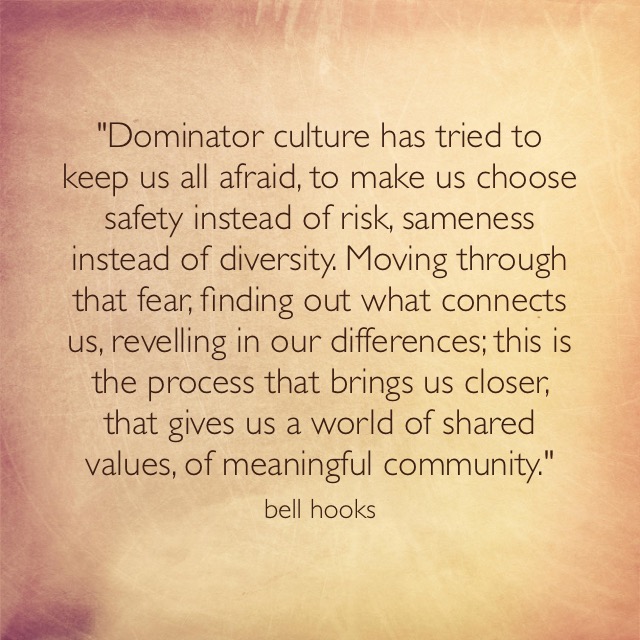 In one of my favourite childhood photos, I’m sitting on the couch with a row of dolls lined up on my lap. Unfortunately, that photo was lost when my mom moved away from the farm after dad died, so it exists only in my memory now. The way my memory serves me, though, each of those dolls has a different skin colour, hair colour, and/or cultural attire. Only one of those dolls has blonde hair and blue eyes like me.

That’s the way I like to think of myself – from a young age choosing to surround myself with difference, with diversity. It’s not always true (in much of my life I have been surrounded by too much sameness), but it’s my ideal image of myself.

I thought of that photo recently when a viral video depicted two young white girls reacting in disappointment and disgust when they received black dolls as Christmas gifts. What’s most disturbing about that video is the way the adults giggle about and invite their reaction and the very fact that some adult thought it was funny enough to share online. Clearly their behaviour is a learned behaviour. Raised in another environment, those girls would likely have been delighted by the gift.

I have been disturbed lately by sameness and the way those girls’ actions too closely reflect our own. I see it in my own life and I see it in the world around me. We gravitate toward what is comfortable and safe, what looks and sounds like us, and so we end up in places, in conversations, and in friendships where there is a clear insider and a clear outsider. In doing so, we marginalize the people who don’t fit in. Without even knowing it, we toss aside the black dolls just as those young girls did.

Marginalized people get hurt by a lot of good people who “didn’t mean to hurt anyone”.

Let me be perfectly clear that I include myself in this critique. I like to be comfortable as much as the next person, and so I too often find myself in places and in relationships where the people in the room largely fall into the same racial, gender, and socio-economic categories as I do.

When everyone in the room looks the same, someone’s left outside. Sometimes that’s okay (when we’re at a family gathering, or when we’ve come together for healing or empowerment, for example), but often it’s not.

Over the festive season, I participated in two spiritual gatherings. The first one (which I’ve written about before) was a small gathering in a hospital sanctuary, where people of diverse faiths each lit a candle and talked about what light means in their spiritual tradition. At that one, the room was full of diversity of every kind. Not only were there at least nine faith groups represented in those who lit candles (most of whom were people of colour from various parts of the world), but there were hospital patients in wheelchairs and people of all walks of life, with varying degrees of health, socio-economic status, and physical ability.

I left that gathering feeling energized and connected to God/dess.

The other gathering I attended was on Christmas Eve, in Florida where my family was vacationing. This was a traditional Christian service that was fairly similar to what I grew up with. Though the setting was very different (this was a large posh church with theatre-style seating, while I grew up in a tiny and poor country church with old wooden pews), the language was largely the same. There was some comfort in that sameness – I knew the Christmas carols and had heard the Christmas story hundreds of times. It was a perfectly lovely service, with great singing and good story-telling on the pastor’s part. One story he shared was quite moving – about how a large endowment to the church had been split up among church-goers who were told to go out and do some act of kindness in the community.

Unlike the gathering in the hospital sanctuary, there was very little diversity in the room. In a room filled with more than a thousand people, I saw only three people of colour and could see evidence of very little socio-economic diversity. Among the visible leadership, there was even less diversity. The only people who spoke or served communion were older white men. Either you received God’s teachings and God’s body and blood from an older white man, or you didn’t receive it at all.

I left that gathering feeling weary and disconnected from God/dess.

I have no doubt that the church-goers and their leaders are good people doing good work in their community. They don’t mean to exclude anyone, and there’s a good chance they have well-meaning conversations about how to increase their diversity and how to reach out to people who are different from them. I know many good people like them, and in many ways, I am one of them – good people trying to do good things.

But good people hurt other people by living their good, comfortable lives and ignoring their own privilege and narrow views of the world.

And this is not a domain that’s exclusive to a conservative Christian church by any means. It happens in all kinds of settings.

Recently I was looking at an online advertisement for a women’s leadership summit – the kind of event I’d normally be drawn to, where leadership is seen through a feminine lens and there’s a comfort level with talk of the feminine divine and women’s power. But there was something about it that left me feeling sad, and I realized it was because of the sameness of the images on the speakers’ list. All of them were white women between the ages of 30 and 50 who looked like they’d stepped out of the pages of a yoga magazine.

Just what the patriarchy has for so long done to them, the organizers of this online summer were, (inadvertently of course) doing to others – marginalizing the voices of those who don’t fit. I’m sure these women would have all been horrified by the video of the young white girls tossing aside the black dolls, but in a way, the result was the same.

What do we do about it? That’s a big conversation and it needs the voices of many people who see the world differently from me.

I can only offer my own perspective from where I stand.

We start by noticing. We start by paying attention – looking around the room to see who’s sitting with us, checking our social media feed to see who we’re conversing with, noticing the books we read and the voices we listen to, paying attention to who has a voice at our gatherings. Because if we’re not listening to the stories of people who are different, if we’re not sitting and having conversations with them, we’ll always be stuck in this same place.

I loved Gloria Steinem’s recent book, My Life on the Road, largely because she shares so many stories about how she was influenced and changed by the people she met on the road. Much of her wisdom came not from people who look like her, but from black people, indigenous people, bikers, and farmers. She is the woman she is today because all of these people’s stories have been woven into her own.

I’m here to challenge us all to live more like that. Let’s be the kind of people who listen to stories and wisdom of people who look, think, and live differently from us. Let’s read books from other parts of the world and written by people of other races and classes. Let’s have more conversations with people who don’t share our political views or our socio-economic status.

I’ve created a list of books written by people who’ve lead very different lives from mine that I want to read and I’m working my way through them. Some I’ve read recently and recommend are Wab Kinew’s The Reason You Walk, Rosanna Deerchild’s Calling Down the Sky, and Chimamanda Ngozi Adichie’s Americanah. I encourage you to build your own list.

I’ve also signed up for a course called “How to Embrace Diversity to Improve your Business” being offered by Desiree Adaway and Ericka Hines. Quite frankly, there is still too much sameness in the kind of clientele I attract and I want to see what I can do to change that. I know that Desiree and Ericka will challenge me and hold me accountable, and though it may be uncomfortable sometimes, I’ll do my best to stretch myself.

What else can we do to shift the status quo? Good people, I look forward to hearing from you.