Neither hero nor villain – just human 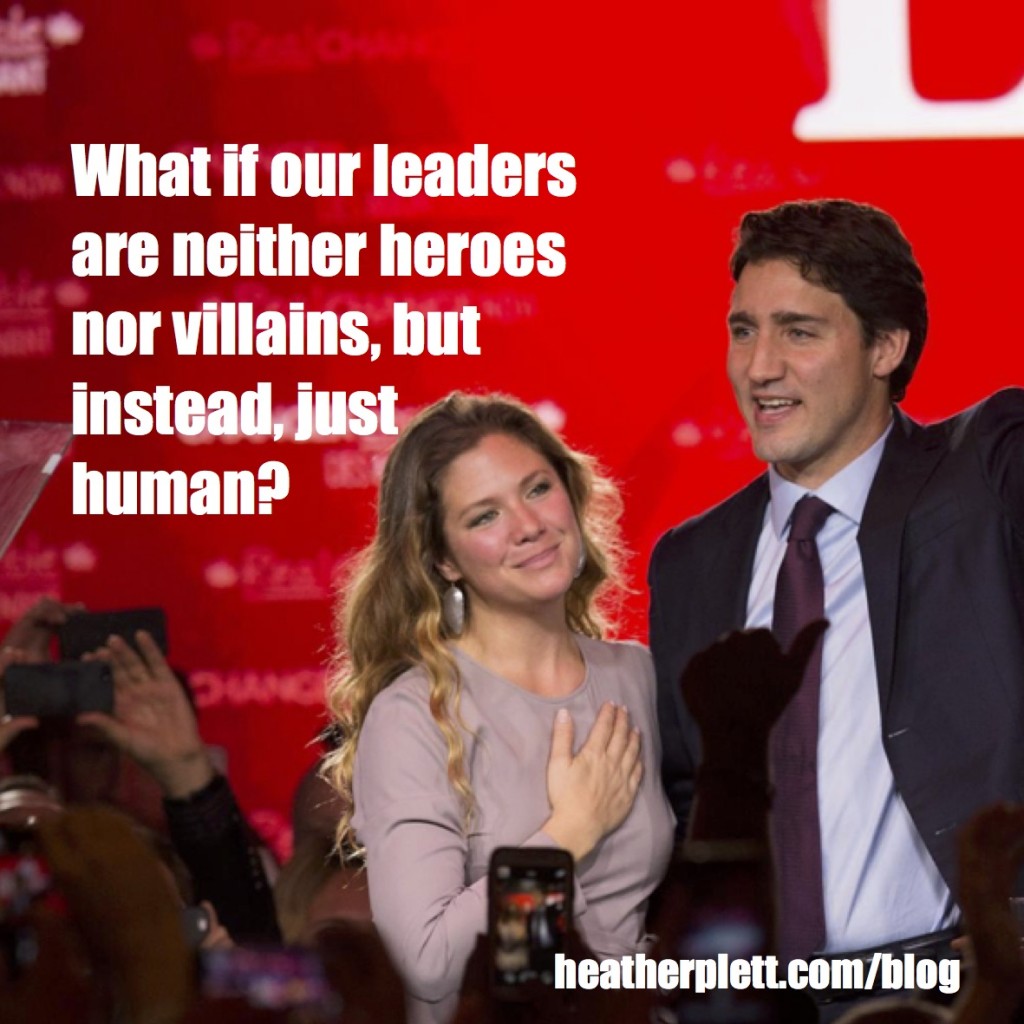 Here in Canada, we’ve elected a new Prime Minister. Perhaps you’ve seen the headlines, touting his good looks, his sunny disposition, his vision for a more equitable country, his way of wearing his heart on his sleeve, his lineage as the son of a former Prime Minister, and his well-spoken yoga-teacher wife.

You may have also seen headlines about his youthfulness, his inexperience, his lack of realism, his marijuana-smoking, or his people-pleasing ways.

As is always the case when someone rises to power, we seek to turn him into either hero or villain. If we voted for him, he becomes hero and we set him up with unrealistically high expectations. If we didn’t vote for him, we scrutinize every move, compare him to the person we’d rather elevate to hero status, and prove our opinions right when he begins to make mistakes.

When I first became a leader in the federal government (though, admittedly, far from the rank of Prime Minister), I struggled with this quite a bit. There were always those among my staff who put me on a pedestal and others who were convinced I was too young/inexperienced/optimistic/female/etc. Due to my own insecurities, I felt immense pressure to live up to the expectations of some and improve the perception of others.

In one particularly memorable instance, after I’d moved to non-profit leadership, a member of my staff started out believing I was infallible and an answer to prayer, and then, a couple of years later, was sending me unpleasant emails on a daily basis pointing out every mistake I’d ever made since I started in the job. (She’d kept notes in a little black book.) For unrelated reasons, this staff person had to be fired, and then her utter disdain for me became an even more unpleasant lawsuit (that was eventually thrown out of court, thankfully).

Around that time, I wrote a blog post about how, because I am human and fallible, I will let everyone down at least once. That’s the way of any parent/teacher/leader/human – we make mistakes. As I said in that post, though, because I will continue to let people down, I will also continue to wait for grace.

Justin Trudeau will let us down some day too. And so will every celebrity, author, friend, politician, or parent we ever put on a pedestal. And hopefully we’ll have enough grace to forgive them and continue to support them as they get back up off the ground and carry on.

Why do we seek to make heroes of our leaders, celebrities, teachers, authors, etc.? Our hero worship always tells us something about our own stories of inadequacy. We believe our heroes will fix our problems, protect us with their super-human courage, or make the world a better place with their exceptional wisdom or beauty. We choose heroes because we believe they are not as weak as us.

The problem with hero worship is that it gives us a false sense that we no longer need to take responsibility.

Hero worship is just smoke and mirrors, though – it doesn’t foster real change. For that, we need engagement. We need citizens who see a leader for who s/he really is, accept them as both flawed and powerful, and choose to work alongside them to bring about a better future. We need people who will see the leader in THEMSELVES as well as others.

The greatest possibility for this kind of engagement lies not in a hierarchical model, where the leader stands out alone as the hero at the top of the pyramid, but in a circle, where there is a “leader in every chair”. In a circle, each person takes responsibility for what they contribute to the whole. Nobody gets to pass the buck.

The longer I’ve been involved in leadership, the more I’ve deliberately moved away from a hierarchical model. I don’t want anyone looking to me as their hero – I want to sit alongside them, wrestle through our questions together, and find new possibilities in the collective rather than in any one person. Even in my classrooms, I often had my students move into circles for discussion, so that each one would take more responsibility for what they contributed to the shared learning experience and none would look to me for all the answers.

When I spend too much time in front of a classroom or on stage or at the top of a hierarchy, I find it plays tricks with my ego and I once again feel the pressure to live up to the image people are choosing to cast me in. There is nothing healthy about trying to satisfy someone’s need for a hero.

When I sit in the circle, on the other hand, I am neither hero nor villain, I am simply human. And so are you.

Yes, I am still a leader in the circle, but more importantly, I have become an intentional listener, for in the circle, we always listen more than we talk. And each person in the circle is a leader and listener along with me. And as we each take responsibility for both the leading and the listening, both healing and change begin to happen.

Imagine what would happen if the circle began to inform our political spaces.Imagine if politicians were taught to sit regularly with their constituents and listen more than they speak. Imagine if opposing parties were required to sit in circle with each other and not interrupt when someone brought a good idea to the circle. Imagine if those in power were required to sit with those who’ve been marginalized and pass a talking piece so that nobody controls the narrative.

Imagine if Justin Trudeau were required to consult with a wisdom circle on a daily basis – one that kept him both grounded and accountable.

Now THAT’s a political system I could get excited about.

Shall we set aside our expectations that our heroes will fix the problems of the political system and work together to bring about real change?