Moving beyond “us and them”

A few weeks ago, I wrote about the importance of finding your tribe – people who love you just the way you are and who cheer you on as you do courageous things.

Tribe-building is important and valuable, but it only takes you part way down the path to an openhearted life.

This week, I’ve been contemplating what we should do with the people outside of our tribes.

It’s cozy and warm inside a tribe, and the people are supportive and non-threatening, so it’s tempting to simply hide there and close off from the rest of the world. When you’re hurting, that might be the right thing to do for awhile – to protect yourself until you have healed enough to step outside of the circle.

But the problem with staying there too long is that it creates a world of “us and them”. When you stay too close to your own tribe, it becomes easier and easier to justify your own choices and opinions and more and more difficult to understand people who think differently from you. Before long, you’ve become suspicious of everyone outside of your tribe, and when their actions threaten your way of life, you do whatever it takes to protect yourself. Fear breeds in a closed-off life.

Last week, I knew it was time to challenge myself to step outside my tribe. I’d been playing it safe too much lately, so when I saw a Facebook posting for an open house at the local mosque, I decided that was a good place to start. I shared the information with friends, but chose not to bring anyone with me. Bringing friends with me into unfamiliar territory makes me less open to conversations with people who are different from me and I didn’t want that – I wanted to go in with an open, unguarded heart. That’s one of the reasons I’ve learned to love solo traveling – it’s scary at first, but it opens me to a whole world of new opportunities and friendships that don’t happen as naturally when I’m hiding behind the safety of a group.

I have traveled in predominately Muslim parts of the world and have always been warmly received, so I knew that the open house would be a pleasant experience. It turned out to be even more pleasant than I’d expected. 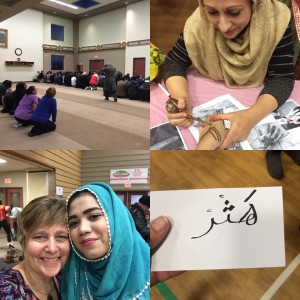 First there was Mariam, a young university student who served as tour guide to me and a small group of strangers. Mariam’s easy smile and warm personality made us all feel instantly comfortable. She lead us through the gym to the prayer room and told us why she’s happy that the women pray in a separate area from the men. “I want to be close to God when I pray, not distracted by who might be looking at me or bumping into me.” Before the tour was over, Mariam hugged me twice and I felt like I’d made a new friend.

Then there was the grinning young man at the table by the sign that read “your name in Arabic”. His name now escapes me, but I can tell you he never stopped smiling through our whole conversation and was one of the friendliest young men I’ve met in a long time. He told me, while he wrote my name, that he’d learned some of his Arabic from cartoons. Growing up in Ontario, he’d preferred Arabic cartoons to Barney or Sesame Street.

At the “free henna” table, I met Saadia, who moved here from Pakistan three years ago because she and her husband wanted to give their children a better chance at a good education. Her husband is a doctor who’s still trying to cross all of the hurdles that will allow him to practice in Canada. Before our conversation was over, Saadia had given me her phone number in case I ever want to invite her to my home to give me and my friends hennas.

What struck me, as I left the mosque, was how much grace and courage it takes, when your people have become the object of racism, fear, and oppression, to open your hearts, homes, and gathering places to strangers. Instead of hiding within the safety of their own tribe and justifying their need for protection and safety from others, the local Muslim community threw their doors and hearts open wide and said “let’s be friends. We are not afraid of you – please don’t be afraid of us.”

I experienced the same grace and courage among the Indigenous people of our community last Spring after we were named the “most racist city in Canada”. Instead of retreating into the safety of their tribes, they welcomed many of us into openhearted healing circles. Instead of being angry, they taught us that reconciliation starts with forgiveness and the courage to risk friendships across tribal lines.

I will be forever grateful to Rosanna, who invited me to co-host a series of meaningful conversations with her, to Leonard who handed me a drum and welcomed me to play in honour of Mother Earth’s heartbeat, to Gramma Shingoose who gave me a stone shaped like a heart and shared the story of her healing journey after a childhood in residential school, to Brian who welcomed me into the sweat lodge, and to many others who opened their hearts and reached across the artificial divide between Indigenous and settler.

The more I’ve had the privilege of building friendships with openhearted people whose world looks different from mine, the bigger, more beautiful, and less fearful my life has become.

This week, I’ve read Gloria Steinem’s memoir, My Life on The Road and there is so much in it that resonates with the way I choose to live my life. It’s a beautiful reflection of how her life has been changed by the people she has encountered while on the road. “Taking to the road – by which I mean letting the road take you – changed who I thought I was. The road is messy in the way that real life is messy. It leads us out of denial and into reality, out of theory and into practice, out of caution and into action, out of statistics and into stories – in short, out of our heads and into our hearts. It’s right up there with life-threatening emergencies and truly mutual sex as a way of being fully alive in the present.”

Another quote speaks to how much broader her thinking has become because of her encounters on the road. “What we’ve been told about this country is way too limited by generalities, sound bites, and even the supposedly enlightened idea that there are two sides to every question. In fact, many questions have three or seven or a dozen sides. Sometimes I think the only real division into two is between people who divide everything into two and those who don’t.”

We don’t have to spend as much time traveling as Gloria Steinem does in order to live this way – we simply have to open our hearts to the people and experiences in our own communities that have the potential to stretch and change us and lead us past a life with only two sides. Sometimes a conversation with the next door neighbour is enough to help us see the world through more open eyes.

p.s. Would you consider supporting our fundraiser to sponsor a Syrian refugee family?