How to start a women’s circle 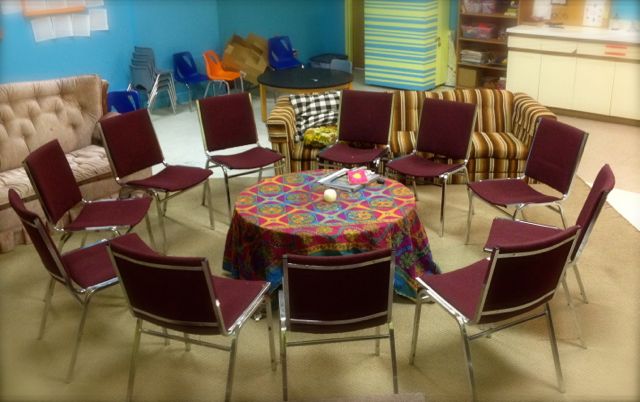 Tonight is my weekly women’s circle, and I’m looking forward to it as I always do. It’s not a perfect space (we are all human and we don’t always know how to hold space for each other), but it is beautifully imperfect. We show up – sometimes 2 women and sometimes 12 – with our scars, our fragility, our fierceness, and our love, and we offer each other the kind of listening we don’t find many other places in our lives. We don’t fix anything or offer advice or platitudes. We just listen and we hold space for each other.

People often ask me to write about how this women’s circle got started, so I’m finally sitting down to offer our birth story as a gift to anyone else who’d like to create something similar.

I had been longing for a women’s circle for several years before I finally got one off the ground. I had a couple of false starts (circles that got started but then faltered and died), so I was a little leery of trying again, but I kept longing for it and believing it was possible, so I made one more attempt.

Before sending out an invitation to those women I thought might be interested, I spent some time considering what my intentions were and what I wanted from the circle. This is an important step because it helps to shape what evolves. Some of the things I wanted were:

1.) A circle that would nourish me as much as the others in the room. Doing this work for a living means that I hold space for a lot of people but don’t always find ways to have space held for me. The creation of this circle was partly selfish in that I really wanted a space where I could be as vulnerable and flawed and held as anyone else who showed up. I wanted to be intentional about inviting people with a level of maturity that they could hold space for me without expecting me to be the “expert” in the room.

2.) A circle that I didn’t have to own by myself. I didn’t want to host it every week and I didn’t want to be the primary leader. Given my travel schedule, I knew that I wouldn’t always be available, and I wanted the circle to have enough strength that it would exist even if I were away for a long stretch of time. I also didn’t want to have to do the emotional labour of keeping everyone informed, managing people’s feelings if they got left out, etc. The only way for it to work was to have shared and/or rotating leadership.

3.) A circle that was accessible to anyone who needed it. I didn’t want it to be a closed, exclusive group, where only those who were members were allowed in. I often get emails from women looking for a circle like this, so I wanted it to remain open to everyone. I also wanted us to welcome diversity and make people feel welcome no matter their race, religion, abilities, etc. (This was a bit challenging, because I also didn’t want to impose my “rules” on the group if I was not going to be the primary leader. I mentioned this desire to the group and we worked through it together to determine whether it could become a shared intention. In the end, it did.)

4.) A circle that had as few barriers for entry as possible. At first I considered having it in a person’s home, but then I wondered whether strangers would feel welcome in the space and whether accessibility would be an issue for people with disabilities, etc.. I found a wheelchair accessible space in a church on a well-traveled street (with buses available) that was available for low rent. (Note: one of the possible barriers that we haven’t fully addressed is that some people may not feel comfortable stepping into a church, but we haven’t found a more neutral space for as low rent.)

5.) A circle that would meet the needs of those who showed up and wasn’t strictly formed by my own agenda. Though I was being intentional about it in advance, I didn’t want to attach too many preconceived notions about what would happen in the circle, how often we’d meet, etc. For it to be collectively owned, I knew it needed to be collectively formed.

6.) A circle that was story-driven rather than agenda-driven. I wanted to create a space for sharing and listening that would adapt to whatever people brought into the circle each week. I didn’t want to create a book club or study group, but rather a place where we could have spaciousness for vulnerability and relationship building. (Again, though, I had to be careful about not imposing too many of my expectations on the group.)

With these intentions held lightly in mind, I arranged for the space to host the first gathering, and I sent out an email to everyone I knew who’d ever shown interest in being in a women’s circle. I invited them to come with their own ideas of what we might create together. I also created an invitation page on my website and, because I wanted to be inclusive, said that “all who identify as women are welcome”.

I arrived at the church early and set up the circle. The intentions about how a space is arranged helps create the tone of the gathering, so I set up a comfortable circle of chairs, with a small, low table in the centre. I covered the table with a tablecloth and placed on it a candle, a bell, some talking pieces, and a box of tissues. (I have yet to attend a women’s circle where tears don’t flow.) I also brought an assortment of teas and had hot water and teacups ready.

Fifteen women came to that first gathering. I read a poem to open the circle, and then we did a check-in round (passing a talking piece around the circle, inviting people to share a little about who they were and what brought them to circle) and then we had a conversation about what people might want from circle, how often they’d like to hold it, what our shared values were, etc. Someone suggested “I think we should have it every week and even if you can’t make it every week, at least you always know that it’s available to you.” There was enough interest in this suggestion that we decided to make it a weekly gathering.

For the next five months, since I have the most training in hosting a circle, I served as host. I arrived early each week to set up the room, I gave gentle guidance about the practices of circle, (ie. We speak with intention. We listen with attention. We tend the well-being of the circle.), and I helped the group find its own groove.

There were a few bumps those first few months. There was some resistance to the talking piece round, for example (people wanted to interject with questions, advice, etc.), and some said they wanted us to have more free-flowing conversation. Some lamented the fact that we didn’t have more time for informal conversation over tea. We considered whether we should adapt the format, having a circle time and then having a less formal portion of the evening.

In the end, what emerged for our circle was this simple format:

This is the format that works for us and may or may not work for other groups. It allows us to show up without anyone needing to do any advance planning and it frees us up to share without needing to attach our sharing to an agenda or theme.

After about five months of serving as the primary host, I had some travel coming up and knew it was a good time to pass on the leadership. To ease that transition, I created a circle kit that could float from person to person, depending on who was available each week. In a cloth bag, I packed the following items: (Some of which were purchased for the group from our shared funds, which we take a collection for periodically to pay the rent.)

Our circle kit now travels from woman to woman. Each week someone volunteers to take it home and show up the next week to unlock the building and set up the space. Those who take responsibility for the bag have also occasionally replenished it with tea, tissue, and candles. This means that there is no onerous responsibility placed on anybody’s shoulders and we all share the ownership.

There’s been an ebb and flow to the circle. Sometimes we’re strong, regularly attracting ten to twelve women, and sometimes we go through a period when only two women show up each week. Sometimes newcomers come for awhile and then don’t come back. Some members will only come every three months or so, when they can get away from family duties.

It’s hard to know right now what the lifespan of the group will be. Before Christmas, when few people were showing up, we wondered whether it was worth it to keep making the effort. But since then, there’s been a bit of a resurgence, so we carry on. There is enough commitment to it that it seems worth it.

There is a natural lifespan to groups like this, and even if it some day falters and fades away, I will always know that it meant something, that it held an important place in the world and it made a difference for whoever showed up. Many beautiful things have happened in the circle and lives have been changed from being part of it. We’ve opened up in ways we rarely do otherwise. We’ve bonded with each other on an authentic level that’s fairly rare in our culture. We’ve become best friends and it’s not unusual for us to gather for Saturday breakfast, when we want more of each other’s company.

We’ve learned a lot about holding space for each other by showing up week after week without expectation, without agenda, and without advice. We’ve peeled away our masks, shed lots of tears, and weathered many storms together. We’ve gotten better and better at offering each other unconditional love.

If you’re ever in Winnipeg on a Thursday evening, we’d love to have you join us!

If you want to know more about how to start your own circle, here are a few resources: