When we own our stories, we let go of shame and step into strength 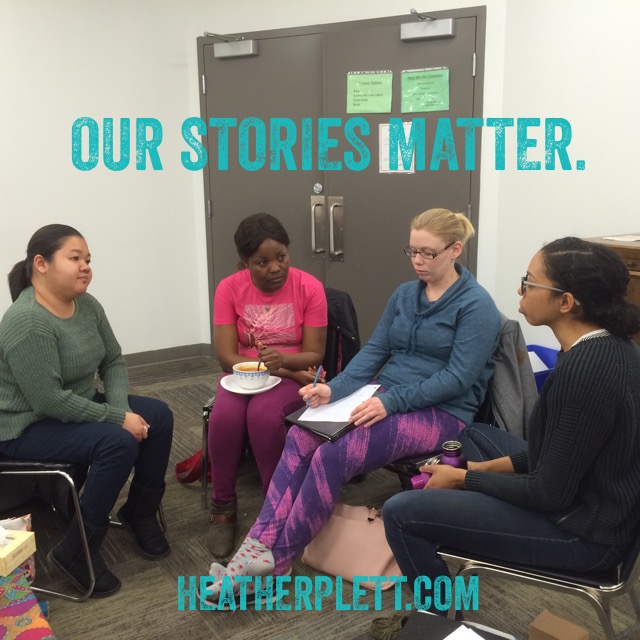 “How would you introduce yourself if you alone got to choose how you are defined?” That’s the question I asked a circle of women who’d gathered for an all-day storytelling workshop yesterday at a downtown women’s resource centre. “There are ways in which we’re expected to introduce ourselves – what we do for a living, where we live, what our marital status is, etc. – but today we’re going to choose an introductory question that let’s us choose our own definitions.”

The first question offered was the one we used as our check-in question. “How are you a survivor?”

It was a beautiful question and it opened the door for honest and vulnerable sharing. These women are fierce survivors. Some are refugees, some are Indigenous, some are single moms, and most are living in poverty. They have survived domestic abuse, mental illness, conflict in war torn countries, the birth and death of children, racism, hunger, and a multitude of other challenges. They are resilient and courageous and it was an honour to be in circle with them.

“We have a choice,” I said. “We could have told those same stories from the perspective of victims, and they would still be true, but we chose to tell them as survivors. That doesn’t mean we haven’t been victimized – we have – but we found ways to survive and now that’s the story we’re choosing to tell.”

“It matters that we claim our own stories,” I said. “Because our stories give us power. Our stories define us and help us to tell the world who we are.”

Later that morning, I showed the women a magazine spread from the in-flight magazine I’d picked up the day before. It was a three-page spread promoting New York magazine’s Best Doctor issue. Not surprisingly, the only images were of white, male doctors.

“When we see things like this again and again in the media,” I said, “we make the assumption that the best doctors are white males. Then, when we find ourselves hospitalized, and we end up with someone who’s not a white male doctor, subconsciously we come to the conclusion that our doctor is not one of the best.”

Whoever gets to tell the stories holds the power. And vice versa. When it’s largely white males who own the media, run the big companies, have access to political machines, and have the most influence in the world, they get to tell the stories their way. Their stories reflect people in the way that is most beneficial to them, and so they tell us stories of people who look like them.

When we hear almost exclusively the stories of people who look and live differently from us – whether it’s because of their gender, race, sexual orientation, class, physical appearance, etc. – we absorb the message that we have less value. And that’s when we become shameful of who we are and we stop telling our own stories. We stop believing that our stories matter.

“I used to be ashamed of who I was,” one of the Indigenous women in the circle shared with us. “When I was growing up, there weren’t many Indigenous kids in our neighbourhood and the only thing we ever heard about Indigenous people was that they were drunks or homeless or gang members. I was ashamed to say who I was, so I tried to pass myself off as Italian. It took me a long time to reclaim my own identity.”

Another woman, a recent immigrant from the Philippines, shared about the shame she’d felt when she’d left an abusive husband and had become a single mom. “I was blaming myself for getting myself into that situation. I shouldn’t have married him in the first place. I felt like everyone was judging me.”

“Our shame keeps us silent,” I said. “But when we start to share our stories, we release ourselves of that shame and then people can’t hurt us with those stories anymore. Those stories become part of our beauty instead of part of our shame.”

“Would it have made a difference if you’d heard more stories of people like you?” I asked both women. “Would it have helped you believe in your own value as Indigenous women or single moms?”

“Yes, when we see people like us doing good things, it makes us feel better about who we are. And when we see their courage, we believe that we can be courageous too.”

“That’s why our stories matter,” I said. “And that’s why we have to find creative ways to tell them. The people who own the media and the publishing companies aren’t going to give us much space to tell those stories, so we have to find alternative ways of getting them out to people who need them. We have to find ways of reaching the kids who were growing up just like you did, and the women leaving abusive husbands just like you did, so that they can see their own worth.”

I pulled out the in-flight magazine again, and this time I shared a story of a photo exhibit opening in Washington, D.C., called “She Who Tells a Story: Women Photographers from Iran and the Arab World” which brings together 80 stereotype-challenging, genre-defying works. “What’s striking about the works,” the article says, “is how they dispel the idea, put forth by the international media, that these women are homogenous and invisible. The photos are feisty, provocative, and, above all, thought-provoking.”

“These women chose to tell their own stories their own way,” I said. “Instead of waiting for someone to give them permission to tell their stories, they chose to own them and tell them the way they wanted to.”

We ended yesterday’s workshop by brainstorming creative ways in which these women could tell the stories of their people in their own neighbourhoods without waiting for the mainstream media to call.

Our stories matter. Our stories have power. When we tell them, we let go of shame and we give other people hope and courage.

Learn to tell your own stories in the next online Openhearted Writing Circle on April 23, 2016.