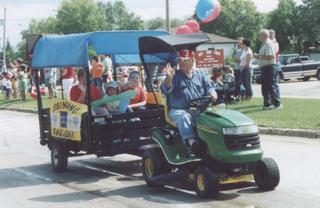 If you knew Marcel’s dad, you would know that, in his version of the world, IT JUST DOESN’T GET MUCH BETTER THAN THIS!!! This is the pinnacle, the epitome, the pièce de resistance (no, please don’t correct my French) – he got to combine so many of his favourite things – riding his John Deere, building a float, AND showing off his grandchildren ALL IN THE SAME DAY! He was a happy, happy man. And we were all very glad that the rain stopped before the parade began.

If you look closely, you’ll see that he even managed to add a little chrome to his tractor. Yeehaw!

If you want to see a little microcosm of small town prairie life, show up the day they have the parade – especially if they’re celebrating their hundredth anniversary. It just felt so nostalgic and so filled with humanity. Make sure you bring a plastic bag, though, to collect all the candy that gets tossed at you from the people on the floats.