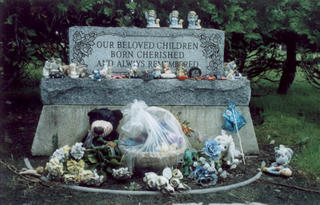 The caption engraved on the stone says “Our beloved children – born, cherished, and always remembered.” In front of the stone is a locked sarcophagus. Inside are buried the ashes of hundreds of tiny babies. One of those babies is my son Matthew. Born September 27, 2000. Died September 27, 2000. Like all the other little babies who share his grave, he was born still and breathless. The only life he knew was inside the warmth of my womb.

There’s a little menagerie surrounding the grave stone. The families who love those little buried babies leave mementos – things that help them stay connected to the children they lost. There are stuffed toys, plastic angels, flowers, candles, toy cars, Barbie dolls – even a hockey puck. Some items are more personal – obituaries, poems penned by those left behind, and photographs. Each was lovingly placed by some trembling hand. Many were baptized by tears.

Two of the toy cars were placed there by my daughters on their brother’s second birthday. In their own way, they want to remember him too. They wonder what he would have looked like at 2, at 3, or at 4 years old. Soon it will be his 5th birthday. Would he have climbed trees and played hockey? Would he have teased his big sisters?

I love to visit that little menagerie. I feel connected while I’m there – not just to my son, but to all the other families who had to say good-bye before they were ready. Each of those people knows what it feels like to hold a dead baby in their arms. Each of those mothers knows the pain of breasts overflowing with milk that will never feed a child.

Sometimes I go there to think or to write. Sometimes I just sit and cry.

The objects on that stone are sacred. Most of them are weathered and worn. Usually I leave them alone – afraid that they may fall apart if I touch them. Sometimes, though, I spot a new toy or a new bouquet of flowers and I wonder if there’s been another burial.

There are some things I can’t quite resist touching, though. I read the poems if they haven’t been obliterated by the rain. I look at the pictures. Once there was a small heart-shaped memory box. Inside was a letter and a plaster mold of a tiny foot. The tears flowed as I returned the box to its spot in the menagerie.

Each of us who visit that grave want remembrance. We want our children to mean something. By leaving earthly toys for our heavenly babies, we cling to the belief that they are real and that their little lives had value. When you’ve touched the tiny little fingers of a stillborn child, you know that your life will never be the same again.