Man of the prairies

August 8, 2003 started out like any other ordinary summer day. I’d started holidays the week before, so we were somewhat lazy that week. I had hopes of painting the house, but that could wait until later in the month, since I was planning to take 4 weeks off. The day before, we’d celebrated our tenth anniversary in style – dinner out at a fancy restaurant, and then a cultured evening at the theatre. Miss Saigon was playing in Winnipeg. It seemed a suitable way to celebrate 10 years of marriage. The next day found us still in great spirits after a rare night out with no kids and romance in the air.

My brother Dwight and sister-in-law Lorna dropped off their 2 boys at our place in the afternoon. They were staying with us while their parents attended a wedding. It was a treat having them around. It all seemed so ordinary. We had supper together, and then walked to 7-11 with all five kids in tow. Slurpees at the neighbourhood 7-11 was about as ordinary as a Friday evening could be.

What I didn’t know was that while we were filling our Slurpee cups with the flavours of our choice, my dad was lying in a ditch, breathing his last breath. When we got home from 7-11, we got the phone call that changed my life. First it was the jumbled, frantic voicemails from Mom saying something about a horrible accident, then it was the call from h8s2cln (my sister-in-law), the only person Mom was able to reach, saying Mom was following the ambulance to the hospital in Neepawa. Then, while I scrambled to pack a bag with underwear and a change of clothes, Marcel spoke to the woman at the hospital. Dad was gone. They hadn’t been able to revive him.

My knees buckled under me and Marcel tried to hold me up. “No, no, no!” I screamed. This couldn’t be! My Dad couldn’t just be gone like that – while we were having Slurpees! It was just so wrong!

We broke the news to the kids, and I raced out of the house. At the ball diamond, I picked up my sister ccap, we ran into each other’s arms and buried our faces in each other’s shoulders. We were fatherless daughters. What did that mean? The pain gripped our throats with unfamiliar fingers.

It was the hardest ride of our lives – travelling across the prairies to the farm which now held no farmer. We wept, we gasped, we pleaded for God to let it be a dream. While we drove we watched the dark angry storm clouds rise above the prairie, the sun’s last rays stabbing them with orange light.

Dad died under a baler. In a freak accident that we’ve tried hard to understand, he walked behind the tractor and baler while stopped in a ditch, and it began to roll downhill, crushing him and tearing open his back as it did. As hard as it was (and still is) to accept, in many ways, it was the right way for him to die. He never wanted to get old. He wanted to farm until the day he died. He wanted to die the same way he had lived – out on the prairie with the sky above him and the earth beneath him.

This year, August 8 saw us driving across the prairies heading for Alberta. Though the sight of a round bale in the ditch can still make me wince, and a glimpse of an old farmer hunched over the steering wheel of a small tractor can bring stinging tears to my eyes, my heart still finds joy on the prairie. I still delight in the sight of round bales dotting the landscape, and a field of wheat still makes me feel I’ve come home.

It wasn’t always easy being my dad’s daughter. Many of the things he did in my lifetime brought pain to my life. Growing up, it was often hard to believe that his children were more important than his farm or his animals. He never was the type of father who showed up for baseball games or school presentations. He left most of the parenting up to mom. Sometimes, I hated him for that.

The hate mellowed, though, over the years. When he died, I could only think of all the things I loved about him – his wisdom, his sense of humour, his deep spirituality.

About 10 years ago, I wrote this poem about my dad. I wrote it right around the time that I was becoming a parent – when I was grappling with some of the issues that I still struggled with about the way I’d been parented. I never showed it to dad – I wasn’t sure if he’d be flattered or insulted. Now, looking back, it was rather eerily prophetic.

He comes so close to god

He comes so close to ecstasy 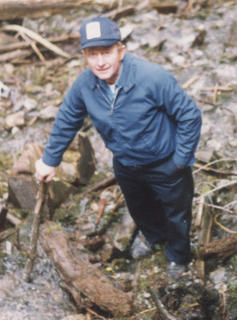 This is him – the man of the prairies. It’s been two years now, and the pain can still steal my breath away some days.