Saying good-bye to something we love 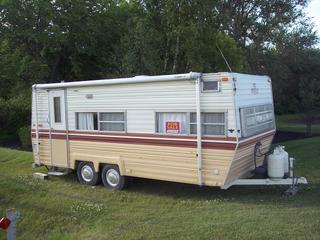 We sealed the deal on the camper last night. It will be moving on to its new owners later this week. Soon, it will house another family, protect them from the rain, keep them warm when it’s cool, give them a place of refuge from the busy-ness of their lives, and hopefully continue to be filled with great memories.

After accepting their final offer last night, I crawled into bed and drifted off to sleep. I woke up during the night, though, with a feeling of deep sadness and almost panic. My first thought was “I’m not ready to let it go!”

We had fun in that camper in the last 4 years. The first weekend we used it, we camped at Hecla Island. Some of my family joined us there, and it was that weekend at the camper that we announced that we were expecting Maddie. I was already 3 months pregnant, but we’d waited until then to tell anyone because we’d had a stillbirth and a miscarriage before Maddie came along and we were, quite frankly, a little nervous.

Maybe that weekend, when her arrival was first celebrated, somehow contributed to the fact that Maddie seems to be our most outdoors-loving kid. The next summer she was just a baby the first time we set the camper up at a seasonal site at White Lake. We took to calling her “beach-bum-baby” because she was by far the happiest when she was lying in her stroller at the beach, or in an inner tube in the water. She had the most adorable tanned chubby legs sticking out of the stroller. 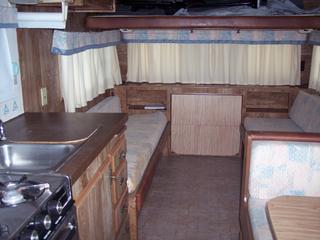 We put alot of work into the camper. When we first got it, I re-upholstered all the cushions (and there are a lot of them), sewed new curtains, and painted some of the walls. The next year, Marcel replaced part of the floor that had rotted, and I put in new flooring tiles. I also sewed each of the girls a special camper pillow with their initials on it to match the upholstery.

Lots of people visited us over the 2 years we had it parked at White Lake. Most of the members of both of our families enjoyed some time with us in the camper. Neices and nephews stayed with us, friends from church camped with us, and we got to know other campers who spent the summers as our neighbours.

We added a screened-in cabana/deck, and enjoyed many evenings there, protected from the bugs and/or rain. I remember lots of laughter in the cabana. I also remember some soul-searching conversations there – like the weeks after my brother-in-law’s first marriage fell apart.

Oh yes, it’s hard to let it go. At the same time, though, I know it’s the right thing to do. We’re downsizing, and the big camper just doesn’t fit into our lifestyle anymore. It’s too big to pull with the new car, and with only one income, we can’t really afford it either. We’ll probably replace it down the line with a smaller pop-up camper, but for now we’re quite content to be tenters again. Like I’ve said before, though it hurts now and then, we know it’s right for us to take a step out of the consumer rat-race and find ways to reduce our consumption and simplify our lives.

It makes me feel a little better to know that the new family who will enjoy the camper seems very nice and appreciative. They’re expecting a second baby, so next summer, the camper will hear the coos and cries of another “beach-bum-baby”, as well as a toddler. No, I’m not much of a capitalist – I’d rather have something I’ve enjoyed go to someone who will love it as much as I’ve loved it than make alot of money off it.

I heard a great story on the weekend of some people who’d bought a house on a private sale, and the people who’d sold it to them accepted their offer not because it was the highest bid, but because they were the family they most felt should own the home. When they took possession of the home, they found a gift for each of the kids that the previous owners had left them in their new bedrooms. 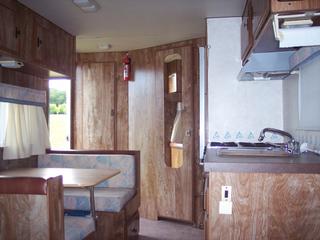 I think I’ll do something like that for the new owners of the camper – leave them a little gift and a letter of “blessing” telling them we hope their memories add to ours to continue to fill the camper with love and warmth. Because in the end, possessions are (should be) like that – ours to use and enjoy for awhile, but then let go and hopefully continue to find a use and bring other people joy.

We’ll still have fun and find joy in other places and other campgrounds, even without the camper. We’ll hang onto the memories it helped us create, and the love we put into fixing the camper up will continue to bring other people joy. Forgive me, though, if I shed a little tear when they drive away with it.