This one’s mostly for my siblings

I think I got only 2 letters from Dad in my lifetime. He was a rare and contemplative communicator – which means he was a man of a few words but he made most of those words count.

This week, while I was sorting through yet another box of clutter in my basement, I came across one of those two letters. The “backstory”, for those readers not related to me, is this… I was nineteen and living in Banff at the time. I was miserable in the worst job I’ve ever had – cleaning hotel rooms for the summer. My Dad was a farmer, and also had an off-farm job at the Auction Mart. At the time this was written, my brother Dwight was working with Dad on the farm. Dad had nicknames for all of his children and grandchildren – mine was “H”.

Here’s what he wrote:

Dear Heather
I’m fine + you are probably better than when I last heard from you. – just came in from getting pump fixed – (want to get to Auction Mart again) – going to drink coffe just now – Jarvis’s here to put in last field of grain – (Sun is shining)

Read 2 letters by H, – don’t get to write letters to daughters and sons often – you might guess why this one is written – read letters with shiny eyes. One of best paragraphs, – you almost offered Dwight work, – sounded sensible by a sensible daughter. Feel close to you – you’re only one with work similar to mine – I have to clean out quarters with last night’s occupants still in them too – One of them kicked me – must have splintered my leg – said leg quite swollen – cheer up – g by

Thank you for material for Cindy’s dress – when I – we were in Banf I carried family up mountain – should try it again sometime. (I saw the Gondolas when I was there) – we rode on them.
Someday I think I’ll frame letter you sent me on my birthday – get lots of letters from people with completely different thoughts of me – some would prob-ly rather see me in jail? – Dwight wants me to come help him with pump.

P.M. Work waiting for you when you come home – approx 3 ft manure in 2 barns – you could maybe work with Dwight – pay 2 1/2 meals per day (above partly serious)

Unscramble above as best you can

And because no letter from Dad would be complete without his unmistakeable handwriting, here’s a scanned version. 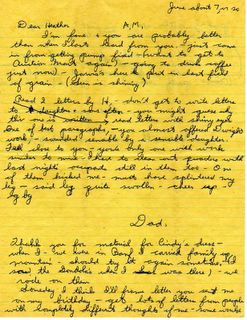 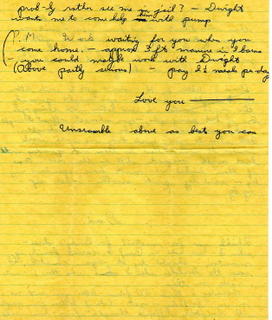 As much as I’m happy to get rid of clutter in my house, this is one thing I WON’T be throwing away.