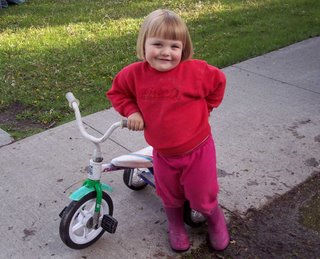 Sunday morning at church, I was in the middle of a conversation before the service began when I felt a little hand slip into mine. It was a familiar hand, but an unfamiliar gesture. My heart skipped a beat when I realized it was my little Maddie, just turned 4, who’d slipped her hand into mine. For no particular reason, she wanted to hold my hand. It caught me off guard.

If this had been either of my other 2 daughters at 4 years of age, the gesture would have been familiar and expected. But this was Maddie. In her 4 years of life, she has RARELY slipped her hand into mine.

She’s my little independent one. She likes to cuddle now and then, but it’s usually on her terms and it’s rarely because she needs me. Or anyone else, for that matter.

From a really early age, we saw the confidence in her. She “made strange” only 2 or 3 times in her life. She went happily off to nursery, barely looked back when first dropped off at a babysitter’s, and told her Daddy quite emphatically that he shouldn’t hang around long on her first day at preschool. When she hurts herself, she runs to her room to cry, and doesn’t even like it when I go to try to comfort her. “Go away,” she has told me, on many occasions.

She has always assumed people will like her – probably because they usually do. She knows how to charm people. I’ve often commented that if I don’t keep an eye on her at the beach (or other public place) she’ll happily adopt another family and go home with them. Many times, at the beach or park, she’s made herself at home with another family, plopped herself down on their blanket, and shared their snacks. She doesn’t even cast a backwards glance to make sure we’re a safe distance away.

She’s quite convinced that now that she’s 4, she can stay home by herself. Once, when Marcel had to drive me to church, she was emphatic that she’d stay home alone. We played along, got in the car with the other 2 girls, and drove down the road, as she stood at the window and grinned. When we back-tracked and went back to get her, she got mad at me for coming back.

She has a certain quality that draws people to her. When she was smaller, strangers were forever showering her with gifts. She’d go out for coffee or breakfast with her daddy, and almost inevitably someone in the restaurant – a waitress or another patron – would give her a stuffed toy or colouring book. I always worried that this would start going to her head, and she’d become one of those annoyingly precocious kids, but I don’t think she has (perhaps those of you who know her think otherwise?).

She’s an imaginative and fanciful child. She has invented more imaginary friends than anyone I know. She creates little scenarios for all of her imaginary friends, as well as her dollies and bears. Since she discovered the wonders of the digital camera, one of her favourite things to do is videotape herself singing and dancing. It’s quite entertaining when I download the pictures and discover what she’s been up to when no one was watching.

I sometimes wonder if her confidence comes from being so surrounded with love all her life. Being the child who follows a loss has its advantages – we treasured her more than we probably would have otherwise. She was also a bright spot for my mom (and the rest of us) when my dad died. Plus, she had the advantage of always having a stay-at-home parent. Her daddy dotes over her and she gets his undivided attention more than her sisters did.

She’s four now, and yes, she has a bit of an attitude (oh – she’s far from perfect) and she’s a little bit spoiled (yup, it comes with the territory when you’re the youngest), but she continues to delight and amaze me. I hope her confidence carries her through life. I hope she will always be surrounded with love. I hope I get to watch her grow into an amazing, confident, and beautiful woman.