It’s not a picture that would stop you in your tracks if it were hanging in a gallery. In fact, you’d pass by and probably wonder if you could get your money back for this exhibit. No, it’s not exhibit-worthy or even frame-worthy. If you had taken it, in fact, it might be one of the pictures you’d cull rather than place in your photo album.

It’s a completely ordinary picture, but it’s hanging on my office wall in a place of honour – right next to my computer where I can see it while I work. It’s a picture of a patch of sunny yellow dandelions, growing near a wall. In the bottom corner of the picture is a shadow – clearly the shadow of the person who leaned over to take the picture.

Why is this picture on my wall? Let me explain.

Two and a half years ago, my Dad was killed in a farm accident. His death tore a huge hole in my life, and left me reeling from the pain. It’s true that “you don’t know what you’ve got ‘til it’s gone.” My Dad had always been a constant in my life – a source of wisdom, humour, stability, and inspiration – but I didn’t fully recognize any of this until death snatched him away.

When we were cleaning out the farm house, in preparation for the sale of the farm and mom’s move to the city, we found something that Dad had left behind – a camera. It was an inexpensive disposable camera and the film inside was full of the last pictures Dad had taken before he died. At the time, it seemed almost too much to cope with, so we set it aside and nearly forgot about it. My sister held onto it, always with the intention that she would eventually develop the pictures and share them with the rest of the family. I don’t believe my brothers even knew it existed.

A few months ago, more than 2 years after Dad died, I got an e-mail from my sister. She’d developed the pictures and scanned them. They were all attached to the e-mail. I sat there staring at my computer screen, knowing that I was about to open Dad’s last gift to us, his family. At the same time, I was a little afraid to raise my expectations – the pictures might prove disappointing.

I didn’t open them right away. I had to give myself time to process and prepare. I waited until my children were in bed and I was alone at the computer. I knew the emotions would overwhelm me.

When the first image opened, I breathed in sharply. The now familiar pain of memory poured over on me. It was almost more than I could bear – seeing Dad’s world through his own eyes. The tears began to flow as I clicked slowly from picture to picture.

If ever there was a sacred moment, this was it. It was almost mystical how much those pictures revealed the man we’d lost. Every picture told a little story about his life – what was important to him, where he found beauty, what inspired him, and where he spent many hours of his days.

All of the pictures were taken on the farm, a place he loved to be like no other place on earth. Every picture tells of his love of creation and his respect for the earth. The range of pictures spans a whole year – showing a view from every season. There are growing gardens, flowering trees, sheep, geese flying over the water – these are all things that my dad loved with almost a child-like enthusiasm. I remember times when he’d drag me across the yard, just to see a new bud poking through the earth or a new calf taking its first step. I remember the calendar entries in the Spring – “first sign of geese”, “frogs croaking.” This was a man who knew how to enjoy the beauty and surprises in creation.

Some of the pictures are of people he loved. One picture shows Mom with her bicycle, one of her favourite possessions. Another one shows two of my daughters in the garden. In one winter picture, I’m standing beneath a tree, peering into the branches at someone I believe is my nephew.

A few of the pictures must have been taken by mom, because Dad is in them. My second favourite picture (also hanging on my wall) portrays him carrying a yellow bucket, amidst a herd of sheep. Dad loved sheep. He owned them just because they fascinated him so much. He particularly liked the imagery in the Bible where followers of Jesus are compared to sheep with a shepherd. In Dad’s sheep pasture, near the highway, was a sign that read “My sheep hear my voice and they follow me.”

That brings us back to the dandelion picture. What makes this one special? Well, just like sheep, Dad had a special love affair with dandelions. He thought they were among the most underappreciated gifts of God’s creation. He believed that not enough people stopped to look at dandelions – to really appreciate them.

Now you can understand why a picture that shows a shadow of Dad leaning over to take a picture of dandelions is one of the greatest gifts I’ve ever received in my life. And the gift goes far beyond the picture. The real gift is having had the privilege to be raised by a man who taught me how to marvel at little things like dandelions, to see God’s hand in everything, and to let even those things that others call weeds teach me something valuable.

Here, for your reverent viewing pleasure, are my favourite pictures. The next time you see a dandelion, think of my Dad, and breathe a little prayer of thanks. (Cuppa, I still remember the tribute you did last year – I was so touched!) 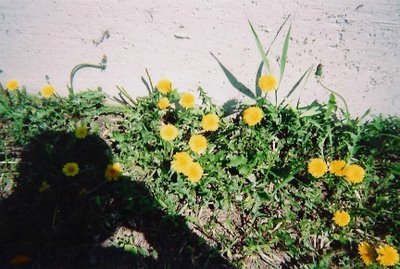 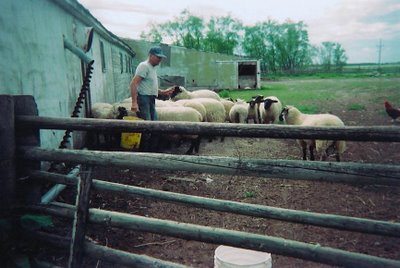