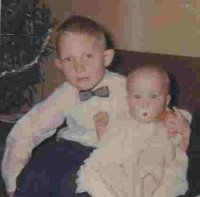 Today my Big Brother turns 45. I had no idea 45 could be so young until I got this close myself! (Yes, that’s him and me in the pic. Sorry, I thought I’d done a better job of scanning it.)

He’s a cool guy, my Big Brother. Here are a few of the things I like about him:
– He is fearless. I think he’d try almost anything if he had the chance (except for a few kinds of exotic foods, perhaps).
– He is generous. He’s probably given away more money (and other stuff) than I’ve made in my life. I remember calling him in a panic when my sister and I were wandering around Europe and couldn’t access our funds and he said “why would you feel badly about asking ME for money?”
– He’s a great dad. To watch him with his kids is to see a thing of beauty.
– He is adventurous. I both envy and admire his ability to leave all earthly possessions behind and backpack around the world for a year.
– He’s smart. In our family, he’s the “go to” guy for all kinds of questions like how to fix a computer, what’s the best stereo equipment to buy – you name it.
– He’s fun. He loves to drive fast, go on adventures, seek out new places, watch movies, climb to ridiculous heights to get the best picture, throw caution to the wind – basically, he’s a bit of an experience junkie, and he likes to take along anyone who’s willing to join him.
– He’s wise. He doesn’t accept things at face value, and he dares to ask the deep questions. He’s a little like our dad in that way.

I could think of other things, but I don’t want to swell his head TOO much. 🙂