You think WE’VE got problems…

The political challenges we face in Canada (and even in the U.S.) pale in comparison to what they’re living with every day in Zimbabwe. I just wrote a press release about a seven million dollar shipment of food we’re delivering there. Unfortunately, it’s a drop in the bucket because the UN predicts that 5.1 million people, nearly half the population of Zimbabwe, will require emergency food aid in the first quarter of 2009. On top of that, they’re saying that they expect about 60,000 people to contract cholera before the outbreak is stopped. And meanwhile, Mugabe claims the outbreak is over. Can you really trust a man who’s hacked off peoples’ hands for voting against him?
This is the first time I can remember seeing the word quintillion used. Not even the U.S. bailout package uses numbers that big. My friend Pugeni once told me that when you go to the grocery store to pick up a jug of milk, the price has inflated before you can make it to the till.
Last night, I was watching the video clip (linked above) where Mugabe is talking and Maddie wanted to know who he was. She could hear the sadness in my voice when I started talking about the country he leads and the horrible things he’s done to people. When I told her that he’s the leader of the country where our friend Pugeni lives, her eyes filled with tears. “It’s okay,” I said, “I’m pretty sure Pugeni is alright. So far.” I can’t promise her the moon, after all.
From across the room, Nikki shouted, “Why doesn’t somebody just shoot him?” And I said, “well, my dear, I’m surprised nobody has yet. But it wouldn’t be the solution we’d want to see. Because we believe in peace.”
We believe in peace. I have to repeat that like a mantra when my anger rails at a situation so beyond my control but so close to my heart because I grew so fond of our special friend in the short time he was here. 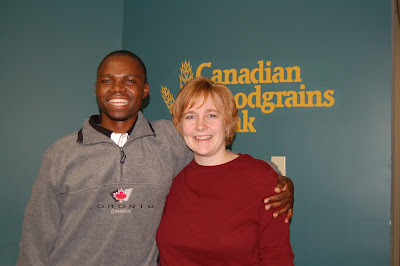