When Dad comes back to me 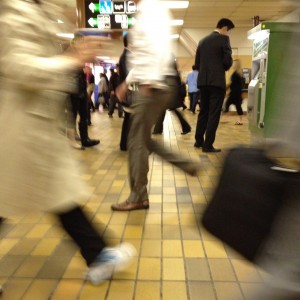 It was the last place on earth I expected to see my dad.

The middle of Union Station in downtown Toronto in the middle of morning rush hour was about as far from Dad’s reality as any place on earth. Yet there he was, looking lost and confused, and yet oh so gentle.

No, it wasn’t my real dad. He’s been dead for nearly nine years. And yet… it was one of those moments when he felt nearly as close to me as he did when he was alive.

The flesh and blood man standing in front of me didn’t look much like my dad, but there was something in his eyes that first caught my attention. Add to that the fact that he looked like he still had farm soil under his fingernails and was completely confused by the mass chaos that is a downtown train station in a major metropolis, and I was captivated. “Do you know where I catch X train?” he asked of several passersby, only to be shrugged off. I wanted to help him, but I had no idea where to catch my train, let alone his.

Eventually, I found my way to my platform, and he found his nearby. I sat down on a bench to wait, and he put a coin into the pay phone to call the daughter who was waiting for him.

“I hate the city,” he said, without bitterness or anger. “There are so many people rushing around and nobody will stop to help a poor guy out.” I smiled. Suddenly I had a flashback to the time when my dad took a bus trip from Manitoba to Alberta, with his tin lunch box, coffee thermos, and eight cents in his pocket. People probably laughed at the farm hick on the bus, but he didn’t care – for him it was an adventure, and years later he still told the story of the young mom on the bus whose child he’d held when travel crankiness set it.

“I love you,” I heard the man say at the end of his call, in a voice so gentle, it clashed with the din all around me. “See you soon.”

At that moment he stopped being the stranger lost in the train station and became my dad.

I started to weep. It felt like I’d had a message from the grave. Oh how I wanted to hear those words from the real live lips of my dad. “I love you. See you soon.”

For the next hour, as I rode to the meeting at my client’s office, the tears kept welling up in my eyes. Nine years he’s been gone, and it’s been many months since I wept for him. The pain doesn’t throb very often any more. He comes up less and less in conversation and when I think of him, it feels more like tenderness and less like jagged, agonizing pain.

But sometimes the jagged pain comes back. Sometimes it creeps up on me out of nowhere and…. BAM! I’m lost in a puddle of grief again, right there on a platform in Union station.

He’s still here. He still has a presence in my life. He still shapes who I’m becoming.

What we get is a new story to carry with us. A story that’s heavy and complex and beautiful and ugly and painful and joyful – all kinds of complicated things wrapped up together in one unique package.

I’m glad I still carry the story of my dad with me. I’m glad the essence of him can still show up unannounced in the most unexpected places.

I’m glad I’ve known enough love in my life to know what grief feels like.

I’m also glad that there are people who are doing important work in teaching us about and guiding us through grief, like my friends Cath and Kara. We need wise, compassionate people who give us space for grief, remind us of the complexity of it, and don’t judge us for the fact that nine years after a loss we can still be found weeping on a train platform.

Grief is just part of the journey.