It’s never too late to start

Last night, I was privileged to be present when Neda, a former participant in my Creative Discovery class and Horses & Mandalas workshop, launched her first poetry book, Neda: Whisperings of the Divine. Neda is the same person who gifted me with the beautiful prayer shawl mentioned in this post.

Neda is a 68 year old grandmother. She started writing poetry in 2007. She says that poems suddenly started pouring from her soul, even though she’d never been a writer before. They showed up because she was willing and open to try something new and to be a conduit of the Divine. I’ve witnessed her beautiful openness in class several times when she was willing to jump in and try things that were outside of her comfort zone. If you ever meet her, you should ask her to show you the beautiful journal cover she made in our class.

This morning, I had a conversation with my dear friend Diane. Diane just turned 70 and she’s also a grandmother. Diane and I met a few years ago in circle training with Christina Baldwin, and we co-hosted last summer’s Gather the Women gathering in Peterborough, Ontario. At the end of one of the days at Trent University last summer, Diane and I dove into the river in our clothes.

In this morning’s conversation, Diane wanted advice on the best (and simplest) technology to use for a new radio interview program she’s starting soon. She also wants to launch a new website and start offering some new wisdom sessions (that are kind of like coaching, but need a different word). Diane is on fire to do the work she feels called to in the world – hosting women in circle, teaching about spirituality and the feminine divine, and being a mentor to women like me who are in this work. By the end of the conversation, we’d dreamed up a new retreat we’ll be co-hosting this summer.

The next time you feel like too much time has passed in your life and it’s too late to do anything significant or creative or scary, think about Neda and Diane. Think about these beautiful, wild-hearted women, and dare to say YES! 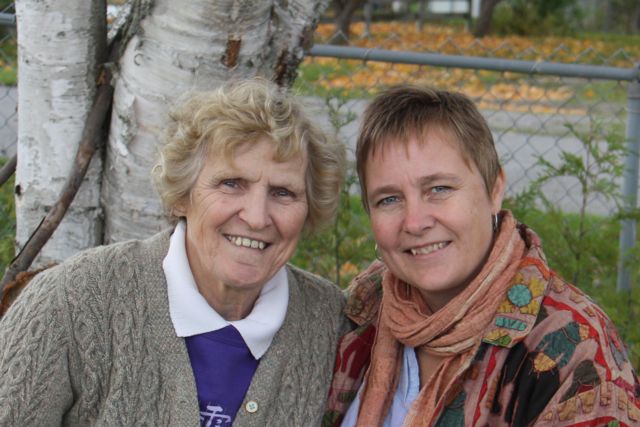