Daring to stand in the trembling 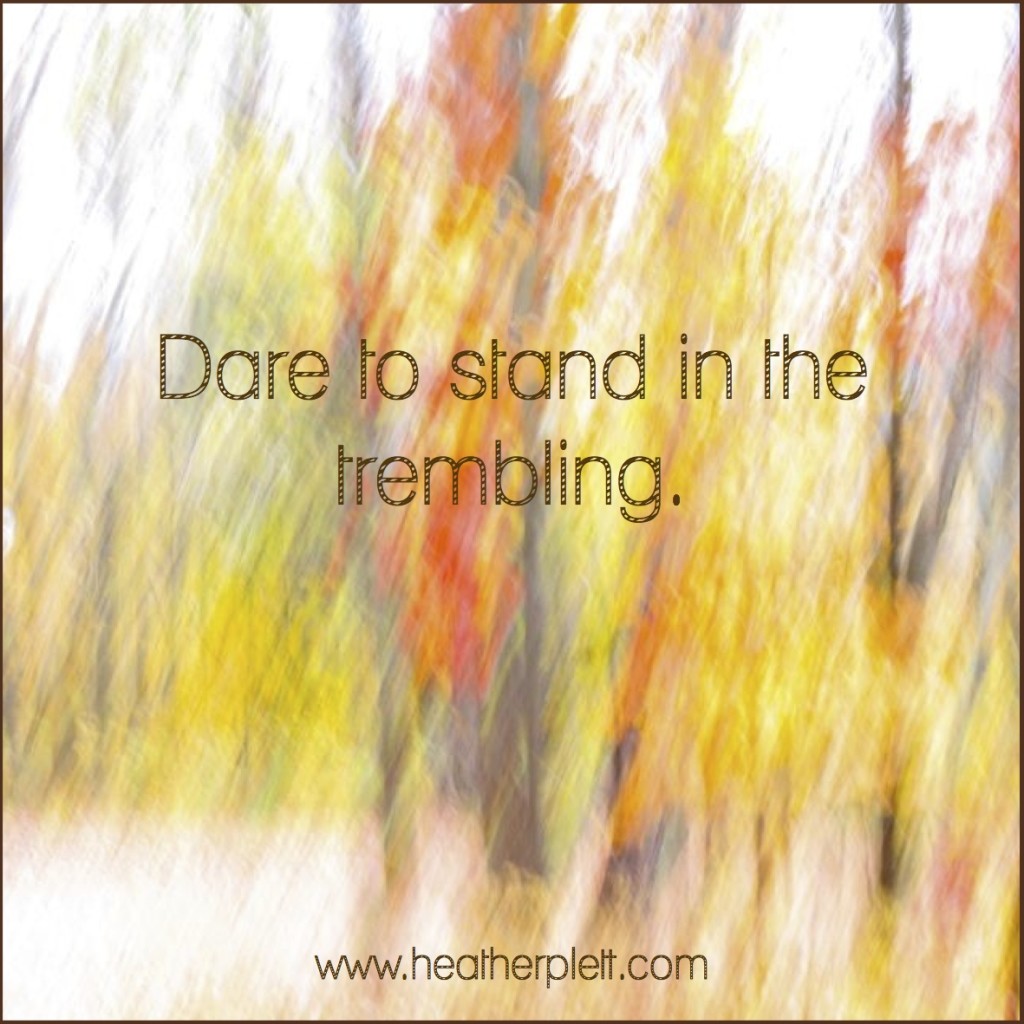 A dozen years ago, I taught my first class on creativity and spirituality. A small circle of women gathered each week to give themselves permission to play, to explore creativity as a spiritual practice, and to exhale deeply.

Each week, with our hands in clay or paint, we cracked open the vulnerable places in our hearts that held the shame of our unworthiness, the fear of our failure, and the resistance to allowing ourselves to do that which brought delight.

Almost every week, I found myself in the middle of “the trembling”. I’d spent most of my life ignoring my body, so I didn’t recognize at the time that it was sending me powerful messages. As I’d host the women’s stories of heartbreak, fear, shame, and triumph, my whole body would begin to tremble, like it was shivering from cold. I’d have to clench my jaw sometimes, or hold my hands under the table, afraid my shaking might be seen.

At first, I chalked it up to nervousness. This was brand new work – work I’d been longing to do for years – and I didn’t know if I would succeed.

But it wasn’t nervousness (or at least it wasn’t only nervousness). I’d done much scarier things in my career (like hosting press conferences for Prime Ministers) and none of those scary things had caused the shakes like that.

In the words of Mihaly Csikszentmihalyi, the trembling came in those moments when I was in flow… “completely involved in an activity for its own sake. The ego falls away. Time flies. Every action, movement, and thought follows inevitably from the previous one, like playing jazz. Your whole being is involved, and you’re using your skills to the utmost.”

This was so much more than nervousness. This was the message my body was sending me that I was in my right work.

That class led to other classes, to other circles, to other soulful conversations, to other art-making, and to other work that made my body vibrate. It was the beginning that eventually lead to everything I do now.

The trembling showed up again and again, while working with coaching clients who dare to crack their hearts open, while hosting women’s retreats where tears reveal the most honest truths of the heart, while inviting corporate clients to risk exposing themselves in meaningful conversations, and while writing blog posts that come from a deeper place of knowing than anything I’ve tapped into before. The trembling tells me I am on the right path, doing the right work, talking to the right people.

When I hosted the first call for the Idea Incubator, I invited people to share where in their lives they are feeling the trembling. As they shared what was cracking their hearts open, I felt my own trembling begin again. This is my work. These people with open hearts and brave dreams are my people. I stand here, trembling with them.

What if, the first time it showed up, I’d simply interpreted the trembling as fear and learned to shy away from it in the future? What if I’d never taught another class because I was too embarrassed to be seen with shaking hands? What if I’d been careful to stay in work that never made me tremble?

What if YOU ignore the trembling? What if you take the safe road? What if you never dare to let yourself be scared? What will you miss?