This gift is not yours to keep – pass it on 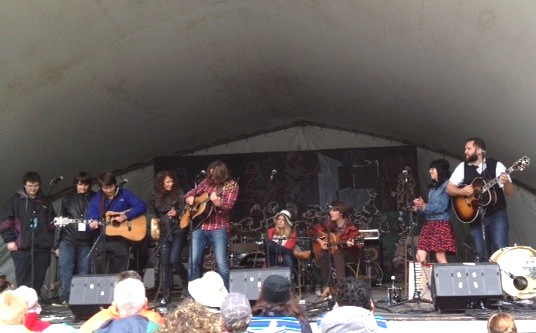 There’s a tradition at the Winnipeg Folk Festival that I’ve loved for 28 years. Apparently it doesn’t happen at every festival, but I’m glad it happens here. It’s called a workshop, where anywhere from 3 to 7 performers share the same stage and take turns performing. Most of the time – and this is where musical magic happens – they join in on each other’s songs and turn it into a big beautiful jam session.

At this particular stage, it was Sarah Lee Guthrie and Johnny Irion‘s turn to perform. Sarah Lee, who was born into folk music royalty as the daughter of Arlo Guthrie and granddaughter of Woody Guthrie, was introducing the song by talking about the production of their last album. “Not long ago, we had the huge pleasure of performing with Wilco, and we were honoured and delighted when Jeff Tweedy agreed to produce our album.” She gushed a little more about working with the musical greats, and then talked about how excited she was to be able to perform with Joan Baez later that day on another stage. It was clear that she had many musical heroes who’d mentored and supported her as she grew up in the business.

When they were about to begin, her husband Johnny invited three young men – who couldn’t have been more than 15 – to the stage. They were members of Stompbox NL, a young band that had been invited to perform in this year’s Young Performers program. Johnny had been paired with them as their mentor, so he knew what they were capable of.

Sarah passed her guitar to one of the young men, and – as a left-handed player – he turned it around and, to the amazement of everyone on stage, played it exceptionally well with the strings in a reversed position (the strings upside-down compared to a left-handed strung guitar).

The stage swelled with sound as almost everyone joined in the song. On the other end of the stage, Fortunate Ones, who come from the same hometown as Stompbox NL and had raved about them earlier, rose to join in, smiling the whole time. Having given up her guitar, Sarah picked up a tambourine and joined in. She moved around the stage, encircling everyone, and grinning at the young men like a proud mom. Just as other musical greats had mentored and supported her, she was prepared to mentor and support these young men coming after her.

Every year at the Folk Festival, there is at least one magical moment that brings it all together for me. One moment when the lyrics stab me to the heart, or the combination of music and the trees swaying above me brings me into a place of deep reverence, or a pair of eagles clasp talons and spin down from the sky above me just as a musician is singing “like a bird you swooped down”. It’s a “thin place” moment, where the distance between heaven and earth collapse and I am in the presence of the sacred.

That moment – with Sarah Lee and Johnny, Fortunate Ones, and Stompbox NL jamming on the stage – was this year’s first thin place moment. I bore witness, in that moment, to the narrative of musical passion passed from one heart to the next, with grace and generosity, trusting that the gift they received is theirs only temporarily and is only valuable when it is shared. And I saw it for what it was – a universal truth.

Wisdom that is held onto is not wisdom at all. Wisdom that is passed from one generation to the next, with generosity and grace, is the wisdom that grows and flourishes and changes the world.

We are all transmitters, allowing the current to flow through us, adding to it our own gift and then passing it on. We are all Sarah Lee, born into greatness, mentored by greatness, and charged with passing that greatness on to the generation that comes after us. When we block that current, because of self-doubt, fear or bitterness, we block the opportunity for others to pick it up further down the line.

Later that same day, on another stage across the festival grounds, Sarah Lee and Johnny played host to a Pete Seeger tribute concert, sharing the stage with Joan Baez, Ani DiFranco, ukelele virtuoso Jake Shimabukuro, Elephant Revival, and Reuben and the Dark. Each performer shared stories of how Pete Seeger had influenced them, whether they knew him personally and had played the same stage as him (as had Sarah Lee, Johnny, Joan, and Ani) or had grown up listening to him in their mother’s kitchen. Sarah Lee talked about how, as a fourteen year old, she’d been invited to play a Pete Seeger song at his annual Carnegie Hall concert. Recently, she’d invited her twelve year old daughter to do the same, and she’d played the same song. Joan Baez talked about spending time at Pete’s home, where he bragged about his new compost toilet and the cabin he’d built himself. His grandsons had disagreed with grandpa’s claim that the compost toilet didn’t stink. Ani DiFranco played the last song Pete completed, just after 9-11, and shared the story of her phone conversation when she’d asked his permission to record it. Pete had run to get his banjo and played it over the phone to her.

“People used to ask Pete Seeger how he defined folk music,” said Joan Baez, “and he’d always say ‘I’m not too concerned about trying to define the music itself. I just think of it as any music that builds community.”

Just moments before that, the stranger sitting next to me, who saw that my jeans were getting wet in the rain, moved his chair closer and passed the end of his tarp to me. “There’s plenty to share,” he said. “Might as well stay dry.” Music that builds community indeed.

That was my second thin place moment. A large community, huddling in the rain and bonding over our shared love of folk music, listening to the musical greats talk about how much they owed to other musical greats who’d gone before them.

At the end of the concert, Joan Baez led us all in a sing-along of “We shall overcome.” It was a perfect ending. A crowd of wet people rose to their feet and sang along.

Once again, I returned home from the Winnipeg Folk Festival with a renewed hope in humanity.

We are all thin places. We are all standing in the veil between the sacred and the mundane. Let us stand in reverence.