When growth comes with loneliness 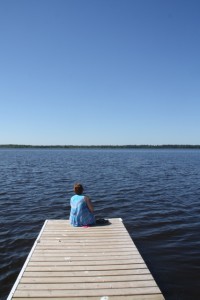 Nobody told me about the loneliness.

Nobody told me that growth can leave you feeling like you’ve stepped out onto a dock all alone and nobody’s there to reach out a hand to steady you when the waves come. Nobody mentioned that the friends who surrounded you on the shore can feel suddenly distant and unavailable.

Nobody talks about it and so you don’t talk about it either. Because you don’t want to be the only one standing out there looking lost and bewildered while everyone else stands confidently. There’s some shame in turning back to those friends on the shore and saying “Look, I’ve grown… but I’m lonely.” There’s even more shame in looking across at the other docks at the people who’ve also grown but seem so much more sure-footed and saying “Ummm… I know we’re supposed to figure this stuff out on our own, but I’m feeling a little lost. Can you come over here for awhile and hold me until I get my sea legs?”

It’s happened to me every time there’s been growth in my life.

The first time loneliness really hit me was when I became a mother. Suddenly all my single friends no longer understood what I was going through and they were still busy doing what single people do while I was fumbling my way through diapers and sleepless nights. I didn’t know how to make new friends in this foreign world of motherhood, and I was pretty sure all the other moms must have been privy to some insider knowledge about how to do this motherhood thing that I didn’t have. I was afraid to admit how lost I was. I remember tentatively reaching out to one mom and trying to admit how I was feeling and she looked at me with what I interpreted as judgement for how inept I was, but was probably a look of understanding mixed with her own fear of admitting how lost she was. I was more reluctant to reach out again after that.

The next time the loneliness hit me was only a couple of years later when I became a senior manager for the first time. Suddenly I was set apart from all of the colleagues and friends that had been my peers just days before. Suddenly I wasn’t let in on the office gossip anymore or invited to the after-work drink dates quite as often. I was a leader now – I was supposed to be self-sufficient and confident and I wasn’t supposed to admit that I was in over my head and really needed some friends to remind me what I was capable of.

Once again, I didn’t know where to turn. I tried to reach out to other managers to form a support group or conversation circle, but there was little reception. They were either too busy trying to maintain their confident leader personas or they’d found other ways of getting the support they needed.

It took a long time, but gradually I found a little support. I started having lunch dates with my friend Susan, one of the only other senior managers I could find who was willing to be vulnerable enough to admit that she didn’t have this leadership stuff all figured out. And then one day I found myself at Authentic Leadership in Action Summer Institute where the opening speaker invited our vulnerability and fear and curiosity and suddenly I realized I was among like-minded people who weren’t afraid to admit that they don’t always know what they’re doing. Suddenly I knew I’d found my tribe.

Not long after that, I went for training in The Circle Way, and the same thing happened. People sat in circle and cracked their hearts open and I knew that I had found my home.

What I realized, around the same time, is that this loneliness is not isolated to career-related growth. It can happen when you change your religious beliefs or leave a faith community or tradition. It can happen when you change your priorities or leave broken relationships. It can happen any time you take a step onto a dock that’s unfamiliar to the people who were standing with you on the shore. You leave people behind, often before you know where to find the next community.

By the time my next major growth curve came along, I was more prepared for the loneliness. When I started teaching, I knew that, once again, I’d be set apart from the other people in the room, wouldn’t be let in on the inside jokes, and would always be seen as “other”. Fortunately, I knew where to turn to when the loneliness came. I’d found my tribe. I had support. The loneliness was fleeting.

The same was true when I launched my own business. I was no longer going in to an office where I could enjoy the camaraderie of coworkers and, though I felt some isolation in that, I knew how to find support in my online circles. My friend Desiree was launching her business at the same time, stepping out onto her own dock, and so we had weekly Skype chats to help each other get our sea legs. Sometimes we cried, sometimes we gave each other tough love, and sometimes we celebrated. There were other people too. I was no longer afraid to be vulnerable and authentic. I found support and I offered it.

I want to encourage them to give themselves permission to be vulnerable.

“I’m not a teacher: only a fellow traveler of whom you asked the way. I pointed ahead – ahead of myself as well as you.” – George Bernard Shaw

Trust me – it’s much easier to grow when you give yourself permission to admit how lost and alone you feel. It’s much easier to find your sea legs if you reach out for a hand to steady you. Sure it’s scary, but it’s worth it. And the surprising thing that I’ve discovered is that reaching out for support is actually a sign of strength rather than a sign of weakness.

Several years ago, I took my daughter Maddy to see a 3D version of Cloudy with a Chance of Meatballs. She was pretty young at the time and it was her first 3D movie, so she was in awe of how the screen was coming alive. Each time something would fly at her, she’d reach out to try to grab it. It didn’t seem to bother her that she never got her hands on anything.

With a grin splitting her face, she turned to me and said “Reach out Mom! It’s way better when you reach out!” I smiled back, started reaching out, and she was right – it was WAY better.

And then, when you’re ready, reach out for the next person behind you who needs the same support.

Also, if you are one of those people stepping out onto the dock and you’re feeling lost and alone and you’re pretty sure everyone else is more confident than you, I’ve created a coaching program just for you. I want to help.