Passiveness and pacifism are not the same (or: what my Mennonite childhood taught me about holding space) 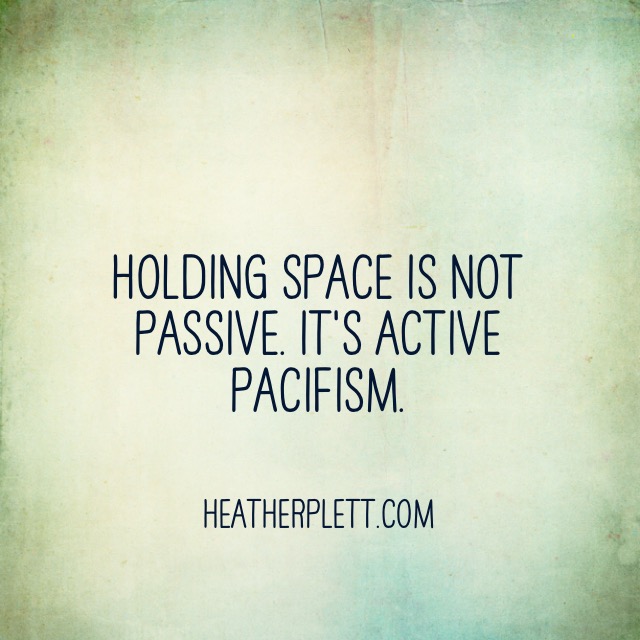 It’s often said that “cleanliness is next to godliness”, but in my Mennonite upbringing, it was pacifism that held that honoured place.

From early childhood, we understood that that was one of the key things that set us apart. We were the people who didn’t go to war.

Our ancestors believed in pacifism so deeply, that they were willing to risk their lives for it. Rather than be conscripted into armies, they faced torture and, more than once, gave up their countries to move to where they could continue to practice non-resistance. First they fled Europe for Ukraine/Russia, and then, when Russia turned on them, they fled to North and South America.

On my bookshelf is my dad’s copy of Martyrs Mirror. It recounts the many people in our Anabaptist history who were martyred not only for their faith, but for their stance on non-violence. According to Wikipedia (and I believe it to be true), “Next to the Bible, the Martyrs Mirror has historically been held as the most significant and prominent place in Amish and Mennonite homes.” That’s how high we hold our values around pacifism.

Though it’s most obvious during times of war, pacifism is much more all-encompassing than that. It’s a way of being that affects your whole life. If you believe that violence is not the answer on the political stage, you must also believe that it’s not an answer on the personal stage. Peace must be at the core of all of your relationships. Look into non-violent communications courses, peace workers in conflict zones, and conflict resolution organizations and you’ll be surprised at how many of them have Mennonites roots.

Peace-loving runs deep in my bones. At all costs, we were taught, remain non-violent. Turn the other cheek. Be a servant of peace.

Although my faith has shifted and I no longer attend a Mennonite church, I am still, at heart, a pacifist. It’s a belief system that deeply informs my work. In hosting the circle, for example, I work to create spaces where conversations can happen without violence and where conflict can be addressed peacefully. Look closely at my writing and you’ll see that I rarely use the language of battle. (ie. I prefer to talk about “dismantling the patriarchy” rather than “killing it” or “smashing it”, and I prefer “serving justice” rather than “fighting for justice”.)

Sometimes though, I let my pacifism get mixed up with passiveness. But that’s a mistake. They are far from the same thing.

As my ancestors modelled, pacifism actively serves peace. Though it avoids violence, it’s not afraid to disrupt the status quo.

Passiveness, on the other hand, doesn’t disrupt the status quo. By not standing in the way of violence, it allows it to continue.

When I am passive, I let people get away with abuse and oppression. When I am a pacifist, I put my life on the line to stand with those who are abused and oppressed.

When I am passive, I hide my outrage and pretend I am at peace. When I am a pacifist, I harness my outrage for the cause of peace.

When I am passive, I fall victim to oppressive systems and flawed leadership. When I am a pacifist, I offer peaceful alternatives and non-violent leadership models.

Pacifism has strength and courage that passiveness lacks. It’s feisty and bold and isn’t afraid to disrupt. It’s not always pleasant and it’s not always gentle. Sometimes it turns over tables and gets in people’s way.

The more I learn about holding space, the more I realize that it is a pacifist act, but it is NOT a  passive act.

Because I talk about non-judgement, humility, keeping our egos out of the way, and allowing people to determine their own outcome, people sometimes assume that holding space is passive. When I hold space for someone, they think, I am passive in allowing their circumstances to unfold.

But that is far from the whole truth.

Instead, holding space is about “active pacifism”. It’s non-violent, at its core, AND it’s strong, firm, and not afraid to disrupt.

It’s not about sitting passively and allowing people to walk over us.

In my workshops, I use the visual metaphor of a beautiful, intricate crystal that some friends gave me to represent the person or group of people I’m holding space for. There is much beauty and capacity to reflect light in this crystal. There is also fragility, sharp edges, and shadow. It has to be held tenderly and firmly. 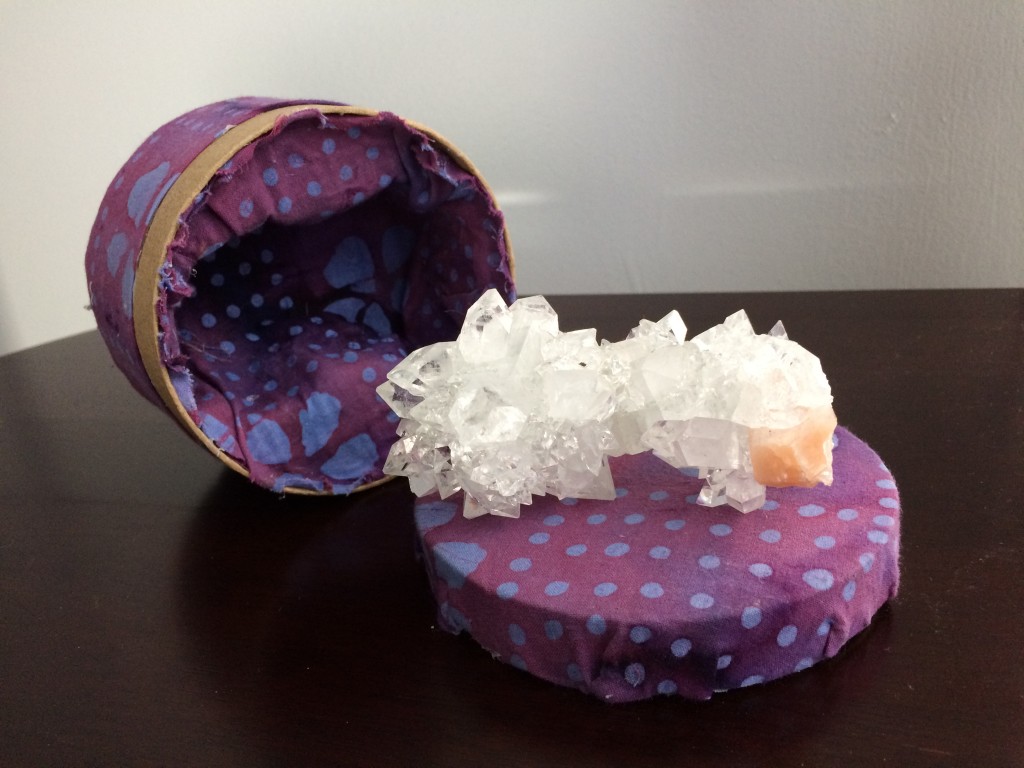 In order to take my crystal with me to workshops, I’ve created the perfect container to hold it – a small wooden box that I have lined with foam that is cut to just the right shape to hold the crystal.

The container holds space for the crystal.

On the inside this container could be considered passive. It’s soft and malleable and doesn’t resist the shape of the crystal. It allows the crystal to show up exactly as it is and it holds that space for it.

But on the outside, this container is far from passive. It has structure and sturdiness. It holds the crystal firmly in place and it resists those forces that might threaten to destroy it.

Like the container, we cannot effectively hold space for people if we are only passive.

If the container were only soft and malleable, the crystal would be easily destroyed if a rough baggage-handler tossed my suitcase onto the conveyor belt. It needs the strong outer shell to protect it.

That strong outer shell provides a form of “active pacifism” for the crystal. It stands firm in the face of violence and oppression. It is courageous and willing to be bruised in order to keep the outside forces from destroying that which it holds space for.

In order to hold space well, we have to be like that container – soft and malleable to hold the fragility, and strong and firm to ward off outside attack. If we are only one without the other, the crystal shatters.

This morning I listened to John Lewis being interviewed on CBC radio about his many years as a civil rights leader. He talked about some of the violence he suffered, including being beaten by a police officer with a club on the Edmund Pettus Bridge in Selma.

Despite all of the violence and injustice he has seen, John Lewis continues to be committed to non-violence. “There are too many guns,” he said. “We need more peace. We need more love.”

He may be serving peace, but John Lewis is far from passive. “As a child, I was taught not to get in trouble,” he said. “But then Rosa Parks taught me how to get in good trouble. And I’ve been getting in trouble ever since.”

In can be said that John Lewis is holding space for all of those who’ve been oppressed by racism in the U.S. He is an “active pacifist” for the cause, willing to get into the “good kind of trouble” in order to serve justice and peace.

It is my sense, in a world in which Trump is the leader of the most powerful country in the world, that a lot more of us are going to need to learn how to be active pacifists. If we truly believe in peace, justice, and human rights for all, we’ll need to be willing to get into the “good kind of trouble”.

Passiveness is not an option. Passiveness allows oppression to continue.

Either we hold space with both softness and fierceness, or the crystal is destroyed.