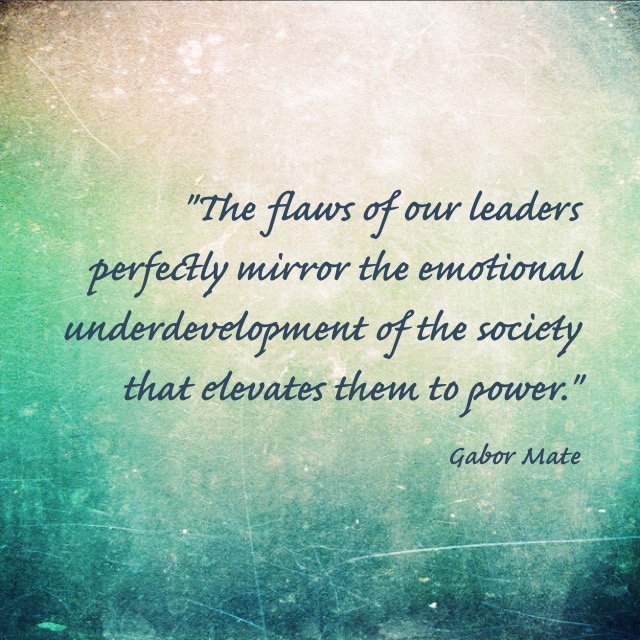 I first noticed it while watching the first presidential debate. When Trump spent the whole time interrupting Hillary Clinton, belittling her, and standing behind her in an intimidating way while she spoke, I was so shaken up that I could barely stand it. This wasn’t just the usual political jostling for space – it was something more. My daughters were surprised when I kept yelling at the TV and by the end of it, I had to go for a long walk to release my outrage rather than take it out on the people I loved.

It was worse when the infamous bus video came out and we heard him unapologetically talking about grabbing women by the pussy. That one took me more than just a long walk to release.

I noticed it again last week during his press conference, when he was gas-lighting reporters by refusing to take their questions, calling their news outlets “fake news”, and treating them like they were stupid for listening to any of the leaked information about Russian interference. This time, though, I knew it was coming so I could witness my reaction more objectively, almost like a scientist watching a subject respond to stimuli.

It took me a while to figure out what was going on. I am, after all, a Canadian who won’t have to live under this administration. Why did I have such strong emotional AND physical reactions to him? Why couldn’t I simply ignore him or dismiss him as full of hot air but not my problem?

I realized that I was being triggered. Like so many other women who have shared similar responses, Trump’s misogyny, gas-lighting, bragging about sexual conduct, intimidation, etc. was triggering my past trauma.

Like every woman, I have been interrupted time and time again by men who think their voice is somehow endued with more wisdom. I have been raped by a man who climbed through my bedroom window and let his lack of control over his own sexual desire shatter my youthful innocence. I have been the victim of gas-lighting by more than one person who couldn’t bear to listen to my concerns and dismissed them as irrelevant, convincing me that I must simply be overreacting. I have been repeatedly grabbed by the pussy by a man who thought he had the right to do so and who ignored my effort to explain why it didn’t feel good.

I have worked hard to find healing for all of these things, but trauma doesn’t go away easily. It hovers under the surface, pretending it’s healed, pretending it’s a thing of the past. But then when it’s triggered by a stimulus that brings back the body memory of the trauma, it erupts in fear and rage and physical pain and all manner of complex emotional and physical reactions. It’s not rational – it just is.

Trauma responses are primal responses – meant to protect us from whatever threatens our safety. They are also deeply rooted in our bodies and cannot be regulated with only a brain response. I couldn’t think my way through my reaction to Trump – I had to seek to understand it on a much deeper level. That’s why some of the “just think positive thoughts” self-help mantras can be so damaging – because they attempt to gloss over the way that trauma, grief, fear, etc., gets rooted in our bodies and has to be healed by a much more holistic approach than simply positive thoughts.

In recent months, especially since Trump won the election, I have been hearing similar responses from many, many people not only in the U.S., but all over the world. It feels like his election has unleashed an epidemic of trauma. We’re vibrating in fear and rage that is deeply rooted in us and we don’t know how to respond. Many dismiss us as over-reacting (because surely our trauma isn’t as bad as people who’ve lived in war zones, for example, so it’s not legitimate), but that feels like a whole other layer of gas-lighting that diminishes our experience and heightens our response.

I’m also hearing another voice – the voice of People of Colour and other marginalized groups saying to white women like me “What took you so long to wake up? We’ve been saying for years that the system is rigged against us. Why did it take Trump getting elected for you to see what’s going on? And why are you being so fragile when we’ve seen much worse?”

The answer to that is complex and multi-layered, and some of it has to do with our privilege and access to power. Some of it also has to do with the fact that it took us longer to be triggered. While People of Colour have been seeing things in the media for a long, long time (probably all of their lives) that has triggered their trauma, we’ve been able to ignore it longer because it didn’t apply to us.

It’s like an abusive family where some are suffering the abuse more than others. The child who’s not getting hit can say “It’s not happening to me, so that means it’s not happening.” She says it out of self-preservation – because the only way she knows how to survive is to live in denial. But then one day she gets whacked across the head by the abuser and suddenly she has to rewrite the narrative of her family. Suddenly she too is unsafe.

The problem is that it’s difficult to forgive someone who ignores your pain until she feels the pain herself. And it’s difficult to feel empathy for the tears and rage of someone who spent much of her life in denial and dismissal of yours. And it’s also difficult to trust and be in relationship with people with trauma when you too have been traumatized. So we end up with situations like the Women’s March on Washington, where they’ve had to work through various levels of conflict trying to find a common voice that gives space for all of the marginalized groups that want to be heard. And this is only scratching the surface – these groups will need to do some deep healing work to learn to speak of their trauma and betrayal and fragility and find ways to heal it and learn to trust each other to hold space for it all in order to move forward with a united voice.

There are other complicating factors as well. Some of our trauma didn’t start with us. Some of it was passed down through the generations, and when we are being triggered by a stimulus we don’t understand, it might actually be related to a trauma experienced by a grandmother or great-grandfather. There is scientific research that has found evidence that we can pass trauma down through our DNA. They’ve found descendants of holocaust survivors who have the genetics of trauma, even though they haven’t personally experienced the trauma themselves. There is also research that says it can be passed through our lineage in ways that aren’t related to DNA.

So, in trying to work together toward a common voice, we also witness the effects of generational trauma. People of Colour who are the descendants of slaves and Indigenous people whose ancestors were the victims of genocide, for example, are carrying centuries of trauma with them. Their ancestors are crying out to be heard through their descendants.

I am the descendants of settlers and colonizers who have not (as far as I know) been subjected to slavery, but I am also aware that my Mennonite ancestors were tortured for their faith and run out of more than one country because of their stance on non-resistance. I suspect some of that trauma was passed down through my DNA and then got all mixed up with my settler guilt to create a stew of complex personal narratives and healing work.

And then there are the witch burnings. Women are carrying this in our DNA as well. At one time, any woman who would have dared to speak about the Feminine Divine or even who was courageous enough to own her own business was called a witch and burned at the stake. We carry with us that body memory as well, and when we consider marching or raising our voices or making a scene in any way, we might be triggered by the ancient voices in us, passed down through the generations, that say “it’s not safe. We were burned for this.”

The other complicating factor is that “hurt people hurt people”. Those who’ve suffered trauma and have not addressed or healed it in themselves are more likely to inflict it on others. Gabor Maté, a world-renowned expert on trauma, surmises, in fact, that Donald Trump’s behaviour is evidence that he was a victim of trauma. “What we perceive as the adult personality often reflects compensations a helpless child unwittingly adopted in order to survive. Such adaptations can become wired into the brain, persisting into adulthood. Underneath all psychiatric categories Trump manifests childhood trauma.”

Maté also says “The flaws of our leaders perfectly mirror the emotional underdevelopment of the society that elevates them to power.” That suggests that we have a whole lot of people walking around with unhealed trauma and those people are capable of causing a great deal of harm as a result. That’s a frightening thought.

Today, Trump is being inaugurated, and I fear that we have only begun to see the wide-ranging effects of the trauma being triggered by his actions and by those he’s placing in positions of leadership. I fear that trauma specialists will be overwhelmed with the people coming to them for support. I also suspect that physical health will suffer – that emergency rooms will see more and more mysterious illnesses that people haven’t connected to their trauma. And we may see an increase in violence, with traumatized people not knowing how to manage their unexpected response to stimuli. I hope that I’m wrong on all counts.

What do we do about it? A trauma therapist would tell us to remove the stimulus from our lives first so that we can heal, but we can’t hide from it when the person triggering us is possibly the most influential leader in the world. So we must do our best to heal ourselves, to equip ourselves with coping skills, and to become trauma-informed so that we can support each other through this.

If you want to become more trauma-informed, here are some resources that I have found useful:

Note: I realize that my resource list is rather limited and includes mostly the voices of men (especially for those resources directly related to trauma). I would like to expand this list with more voices of women and marginalized people working in the field of trauma. If you know of any, please offer them in the comments.