Resources for good people who want to do better 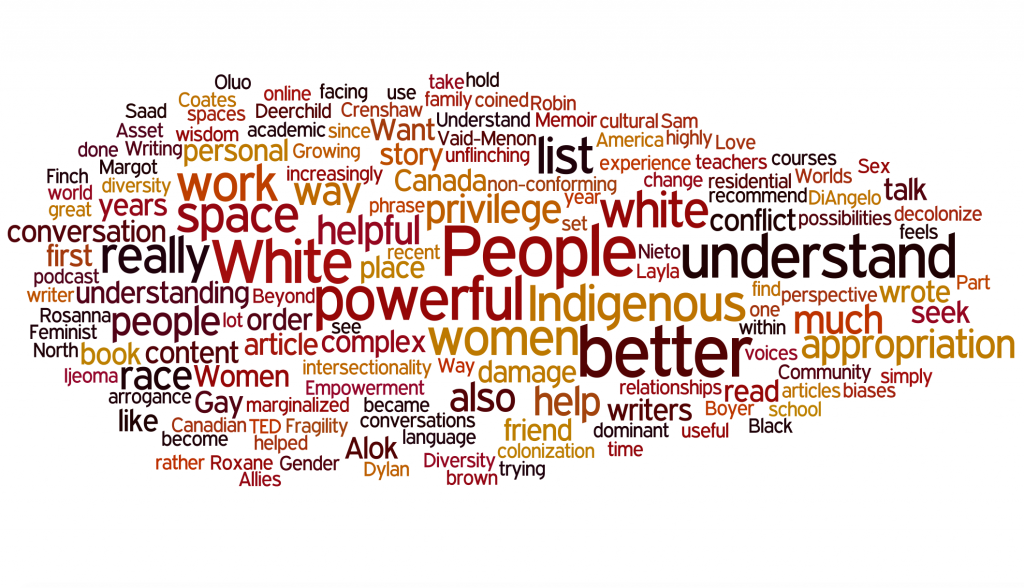 I am far from an expert in issues related to diversity, inclusion, or decolonization but because my work involves holding space for increasingly complex conversations in increasingly complex environments, I make it my mission to learn as much as I can in order to do better and to serve better (and to pick myself up after my mistakes). Especially as someone who has (largely) benefited from a colonial system that has harmed others, I take it as my responsibility to face my own discomfort in order to work toward a better future. A lot of damage can be done in a space where we have unexamined privilege and power imbalances, combined with a conversation host who has not done some work in facing her own unconscious bias, so I am trying (with as much humility as I can) to decolonize myself and the spaces where I work.

A couple of years ago, I set an intention to spend a year decolonizing my bookshelf and centring marginalized voices by reading only books written by writers who were not from the dominant culture. (This year, I’m trying to do the same with courses, workshops, and conferences I attend.) I wasn’t entirely successful (I wrote about that here), but I was, nonetheless, radically changed by the experience. My worldview was expanded, I became much more aware of my own unconscious biases, and my ability to hold space for brave conversations was considerably stretched. AND… I discovered that I actually loved this shift. Now I find myself gravitating toward these writers because they inspire and challenge me and bring a lot of richness to my life. In the two years since this pledge, I still rarely seek out the most common writers from within the dominant culture, but instead, seek out those working at the edges in more complex spaces (whose ideas are less amplified by mass media, publishing houses, etc.).

People often ask me to provide them with resources that will help them stretch their worldviews, decolonize themselves, and hold space for more complexity and diversity, so I’ve put together the following list of books, articles, and videos that have influenced me in recent years. Most of the voices on this list are from non-dominant groups. (I left fiction off this list, simply because the possibilities for that list felt too endless.)

Before I go there, though, I highly recommend that you also seek out teachers from within these groups that you can PAY FOR what you’re learning. A good place to start is the online course Diversity is an Asset, or a deeper version, Social Justice Intensive, by my friends Desiree Adaway and Ericka Hines. (I participated in Diversity is an Asset the first time they offered it, and because I know that they are both life-long learners with insatiable hunger for evolving ideas, I know that the content has grown even better since then.)

(Note: This list is in no particular order. And there are things missing from it that I simply forgot to save links for.)