When you hold space for someone with mental illness 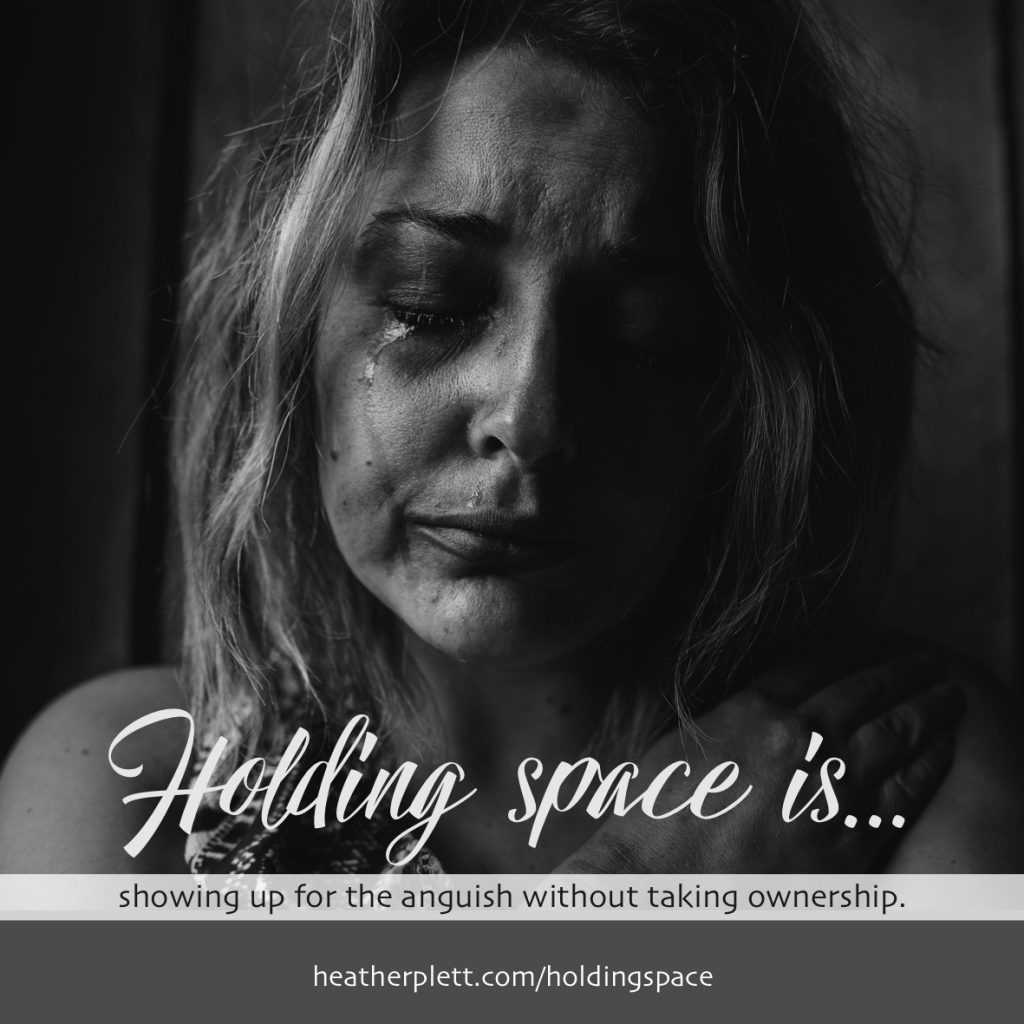 The first time it happened, I was five months pregnant with our first baby.

It started with panic attacks. My then-husband was starting a new job with greater responsibility and, coupled with the expectancy of fatherhood, he was feeling overwhelmed and anxious and started missing work. We tried to get him help – I took him to a psychologist and checked him into an overnight mental health facility when the panic attacks got really bad. I thought things were shifting, but I was wrong.

One morning, after a couple of weeks of stress leave, he got ready for work in the morning, kissed me good-bye, and headed to the office. I was relieved. Maybe this rough spot was finally over. I left for work, assuming we were shifting back into “life as normal”.

A couple of hours later, I phoned his office to check how he was doing. “He didn’t come in today,” his boss told me. “He phoned earlier and said he couldn’t do it.”

I panicked. Where was he? Why had he told me he was going to work when he wasn’t? What was he hiding?

The rest of that long day was a blur of phone calls and tears and hand-wringing that included a car ride out to his favourite fishing hole with my mom to see if he was there. He wasn’t.

Some time that evening, I got a phone call that he was at the hospital. After multiple suicide attempts (that involved a knife and bottles of pills), he’d woken up in his car, realized that, if all of that effort hadn’t killed him, perhaps he was meant to live after all, and drove himself to the hospital. He was rushed into surgery to patch up the damage he’d done and to make sure that none of his internal injuries would be fatal.

The second time it happened, I was “pregnant” with a different kind of baby – I was just about to quit my job to start my own business. Fifteen years had passed (years which included the births of our four children and the loss of one of them), he’d gone back to school to get a university degree, and was finally in a job that looked like it would be permanent enough to support our family while I launched a business.

Once again, a new job with new responsibilities caused the panic attacks to start happening. Once again, we tried to get help. And once again, I got the phone call that he’d taken a lot of pills and needed to be taken to the hospital. (This time, there was no knife involved.)

This time, instead of recuperation time for his physical injuries, there was a very difficult week’s stay in a psychiatric ward. And this time, I had to juggle the needs of three children, trying to keep their lives as close to normal as possible, while driving back and forth to the hospital to support him.

Because when/if we hold space for people with mental illness, we have to practice radically holding space for ourselves too.

It’s taken me a long time to process the impact that those two suicide attempts (as well as the many times when I was worried it might happen again) have had on me. It wasn’t, in fact, until the marriage ended five years after the second attempt, that I finally acknowledged the toll it had taken on me.

Last week, when social media blew up over the suicides of Kate Spade and Anthony Bourdain, I, like many others, was triggered by the stories. They brought back a flood of memories, accompanied by grief, fear, self-doubt, anger, and all of those other big emotions that are part of what a caregiver/advocate has to carry. It’s probably a good thing I didn’t have time to write a blog post last week, because it would have been a more triggered version of what I want to say. This one comes with a little more reflection.

Both of the times my former husband attempted suicide, my adrenalin kicked in and I went into warrior/mama-bear mode. I protected, I nurtured, I fought flawed health-care systems, I ran the household, I negotiated with psychiatrists, and I made endless calls trying to get the right kind of support.

While most of us are familiar with the fight, flight, or freeze responses associated with stress/trauma, there’s another reaction that has recently been added to the literature, and that’s what I was experiencing (though I didn’t know it at the time). It’s the “tend and befriend” response that is found more frequently in females than males. “…compared to males, females’ physical aggression and fear-related behaviors are less intense and more ‘cerebral’–they are displayed in response to specific circumstances and are less tied to physiological arousal. So while both sexes share the capacity for fight or flight, females seem to use it less.”

Researchers found that, during tough times, stressed females spend significantly more time tending to vulnerable offspring than males.“They reasoned that the adaptive value of fighting or fleeing may be lower for females, who often have dependent young and so risk more in terms of reproductive success if injured or dislocated. And females of many species form tight, stable alliances, possibly reflecting an adaptive tendency to seek out friends for support in times of stress.” (Both quotes are from this article. And here’s a link to a research paper about it.)

There’s a tricky thing about trauma, though, that I didn’t understand back then. If the trauma isn’t adequately released at the time, it roots itself in the body and, from then on, whenever a stimulus brings up a body memory of the trauma event, the body responds exactly as it did during the trauma. In other words, though there were only two suicide attempts in our twenty-two year marriage, there were a LOT of stimuli that triggered my “tend and befriend” response (as well as my less prominent fight/flight/freeze). The mental illness of my partner didn’t simply disappear in the in-between times, so any time there were hints of it showing up, although I didn’t consciously think “he’s going to attempt suicide again”, my body responded as though that were true.

Though “tend and befriend” might seem like a more gentle, healthy response to stress than fight, flight, or freeze, I can tell you that it often is not, especially when it’s a triggered response and is unnecessary in that moment. When it showed up, for example, when I was exhausted and yet still had to go into warrior/mama-bear mode on behalf of my children, it drove me to burnout. And when it showed up at the expense of my own well-being (ie. protecting my then-husband rather than looking out for my own interests), it nearly killed me and left me vulnerable to abusive behaviour and manipulation.

It was so present, in fact, that it took several years longer than it should have for me to end the failing marriage. I was so afraid that the marriage breakdown would cause him to attempt suicide again and that my children would have to bear the grief of that, that I held the marriage together much longer than I should have. I was so used to assuming that I was responsible for his emotions and the way they impacted my children, that I couldn’t imagine the world functioning any other way. It took a lot of work for me to release myself of that responsibility. Even three years later, I can be unreasonably triggered by a simple text message from him.

Several years ago (before the marriage ended and after my mom died), I was diagnosed with adrenal fatigue. I was exhausted. My heightened state of alertness and responsibility meant that my adrenal glands had been overproducing for so long that I could barely function anymore. I started taking supplements and tried to change my diet and sleep patterns, but it wasn’t until my marriage ended and the stimulus was largely removed from my day-to-day existence that I finally started to feel like sleep was replenishing me and I wasn’t among the walking dead anymore.

It’s not gone, though. There are still stimuli that trigger the same response in me. When, for example, my children’s emotional meltdowns or panic attacks are similar to their dad’s, I get triggered into the same anxiety and the same tend and befriend response. I rush too quickly to fix things and I don’t always wait for those involved to take responsibility for doing their own emotional work. I’m getting better at recognizing it and finding ways to self-sooth so that it’s not destructive to me or my children, but I’m not foolish enough to think the problem is fixed. I’m still actively working to heal it and release it from my body.

How then, do we as caregivers and advocates stay in the work for people we love without burning ourselves out or resorting to destructive patterns? How do we hold space for ourselves when we find ourselves holding space for those with mental illness?

Here are some thoughts on that…

There is nothing easy about this, and if you find yourself in a place where you must hold space for someone with mental illness, know this… I see you. I witness how hard you are working. I know the tears you cry into your pillow at the end of the day. I get it and I hope that you will find the support you need so that you will not be destroyed by this.

Please, take care of yourself. The world needs you.

Note: If this post resonated with you, check out the work that I do in helping people learn how to hold space for each other and for themselves.