Confidence: not enough, too much, or just the right amount 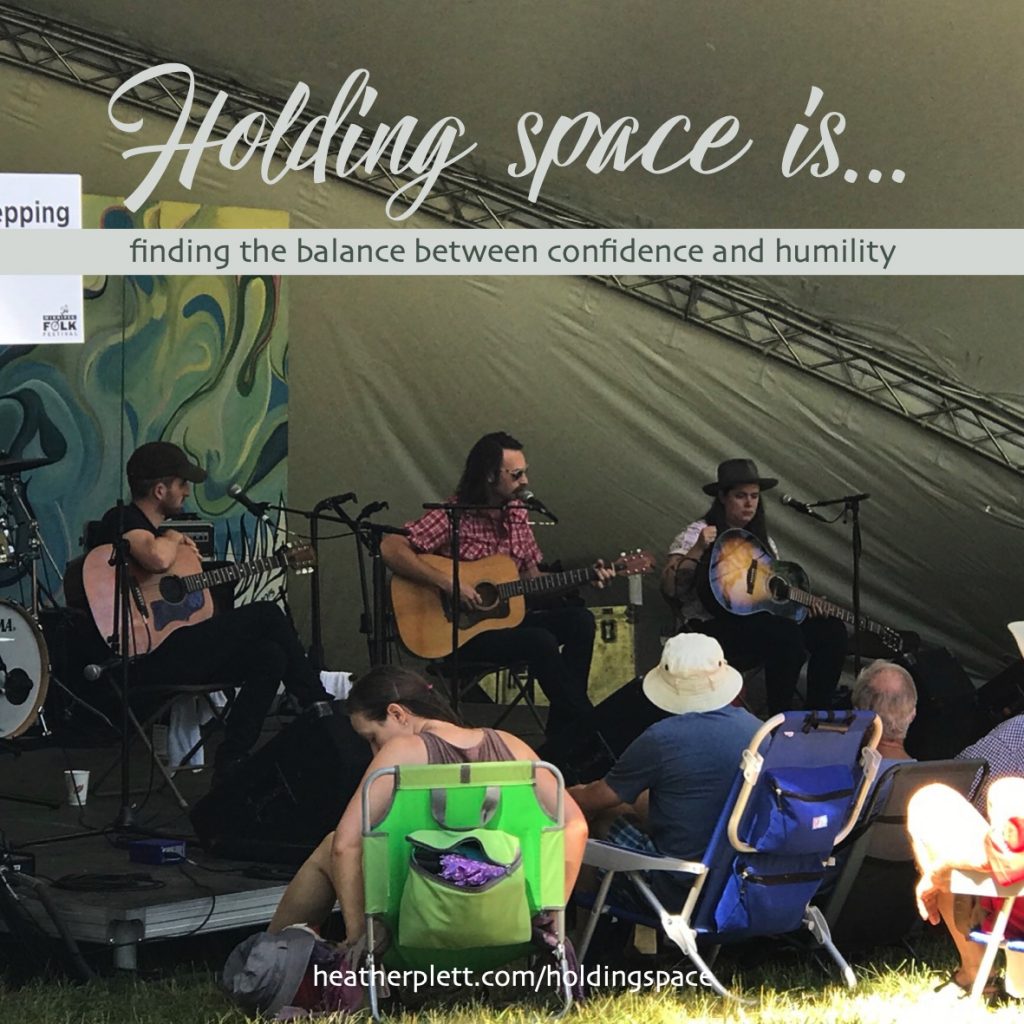 At the Winnipeg Folk Festival, where you can find me in attendance every year, there’s a lovely tradition where multiple artists share a stage and take turns performing songs that are loosely connected to a predetermined theme. (Rarely have these artists met each other ahead of time.) One of the artists is the pre-selected host of the workshop and their role is to introduce the artists and choose the order in which they play.

More importantly, though, their role is to inject some playful banter into the workshop and to create rapport among the artists – to facilitate a bit of a temporary community on the stage.You could say that they’re holding space for the group so that they’ll function well together and provide the maximum amount of entertainment for the audience.

A host can make or break a workshop. If they’re awkward and fumbling, that doesn’t play well and the other artists have a hard time connecting with each other or building the kind of camaraderie that is a joy to watch. The lack of positive energy (ie. humour, friendship, etc.) on stage is easy to pick up on as an audience member and it makes for a less pleasurable experience. If, on the other hand, the host is a skilled community-builder, using humour and warmth to connect and support the artists onstage, it can make for a magical experience for all involved. The best workshops are those where the artists begin to jam with each other, picking up their instruments to back up each other on songs, or playing a cover tune that everyone can participate in.

This year, my favourite host was Sam Lewis (pictured above, centre). He’s a natural community-builder, with easy humour and lots of warmth. He uplifts the other musicians with supportive responses to their songs, and he connects the artists to each other. On one stage (where he wasn’t the host, but still did the work of community-building) Mariel Buckley (pictured above, right) said something nice about the experience of playing with other artists on stage and he reached across to lightheartedly hold her hand. Luca Fogale (pictured above, left), on the other side of him, made a comment about how touching the moment was, and Sam said “you’re next” and then reached over to hold Luca’s hand too. The whole audience laughed, and you could feel the connection not only between the artists, but with the everyone present. Community onstage extends out into the audience and it makes for a positive experience for everyone. (P.S. All three artists are worth checking out.)

I’ve been reflecting on what that magical quality is in Sam and others like him, and one conclusion I’ve come to is this…

Those who’ve come to receive whatever you have to offer want you to be CONFIDENT. They want you to be a leader and not just a wallflower. Your confidence makes their lives more enjoyable and ease-filled. When you SHINE and you don’t apologize for shining, they can relax and trust you.

Shortly after a workshop where Sam Lewis hosted, I was at another one that was quite the opposite and was, consequently, much less enjoyable or memorable. The host was insecure and apologetic. She didn’t understand the work she needed to do to build community, so she simply fumbled through the introductions of other artists and didn’t build any rapport between them. She was a great musician, but didn’t have natural leadership or community-building skills and it was uncomfortable to watch her.

Not everyone has the right skillset to host, lead, or facilitate, and we’re not all meant to do that work, but whatever work you do, consider that those who receive the service you provide are looking not only for your skills, but your confidence in those skills and in the way you build relationships. When you perform with self-assuredness, their trust in you is heightened and their lives have more ease and enjoyment.

In some cases (especially in a crisis) a person’s confidence can even help to soothe another person’s nervous systems, which helps that person think more clearly and make better decisions. Consider an emergency room doctor, for example – if she is anxious and apologetic and second-guesses her recommendations, the patient will feel much more anxious themselves. If, on the other hand, the doctor has confidence in her abilities and knowledge, even if she’s delivering bad news, the patient will be better able to soothe their nervous system and make the decisions they need to make.

There’s a flipside, though, and that is when a person has too much or unwarranted confidence. When confidence becomes arrogance, or a person doesn’t have the skills to back up the confidence, then it doesn’t serve anyone well. A con artist might, by exuding confidence, convince you to place your trust in them, but there’s nothing substantive behind the smoke and mirrors and there’s a good chance someone will get hurt and/or cheated. This is not the kind of behaviour you want to emulate.

Often arrogance and an air of self-assuredness is actually a mask to hide the LACK of confidence underneath. Recently I was listening to a podcast about Nxivm(pronounced Nexium), a secretive self-improvement society built by Keith Raniere that has all the markings of a cult (Raniere has recently been found guilty of sex trafficking, forced labour, and child abuse). The person being interviewed on the podcast, who was once a high-level member of the organization, said that one of the rules of Nxivm is that you must never question someone who holds a higher rank than you. That kind of unquestionable authoritarianism isn’t genuine confidence – it’s a way of controlling people and masking the fact that you don’t have enough confidence in yourself to withstand the negative things people might say about you.

A person with just the right amount of confidence doesn’t have to hide behind false bravado or make rules to keep people in line. They have confidence in their skills and ability, but are also willing to admit what they don’t know (or when they’re wrong) and to learn from and be challenged by other people.

Confidence and humility go hand-in-hand. One of the things that made Sam Lewis a natural host is that he didn’t need to take the spotlight away from other people and didn’t need the audience to love him more than the other artists. He was confident in his own ability to entertain and offer us well-crafted songs (and wasn’t self-deprecating or apologetic in his offering of them), and he was also humble enough to admit when another musician had written a song he wish he’d written.

Sometimes, in the past when I’ve felt insecure about facilitating a workshop or was intimidated by the audience, I’ve found myself downplaying my skills and wisdom and offering what I have in a somewhat apologetic way, like it’s hardly worthy of the participants time, or like I suspect they know more than I do. When I’ve done that, I’ve noticed that the audience responds the way I did when the insecure host fumbled on the stage – they become fidgety and less focused and they usually communicate (mostly nonverbally) that they’re dissatisfied with the workshop or impatient for it to end. (I leaned in to whisper to my sister when the host was fumbling rather than giving the artists my full attention.)

I recognize that the participants are much better served when I show up with a healthy mix of confidence and humility.I don’t second-guess the wisdom I’ve gained or apologize for the choices I make, but I’m also willing to admit what I don’t know and to learn from the others in the circle. My confidence has a direct impact on the group that’s gathered – everybody is better able to trust the circle and to lean into their own learning and growth.

A lot of us have been well trained to be self-deprecating, because to be otherwise is seen as being cocky, full of ourselves or guilty of the sin of pride. We develop an “aw shucks” attitude, downplaying our accomplishments and acting like we have little to offer. This is especially true for women, because our social conditioning taught us that being too confident was unsafe and would get us ridiculed. Many of us have seen the way confident women have been ridiculed and “taken down a peg or two” (or we’ve been victim ourselves) and so we do what we can to avoid that treatment. I think many of us also have body memories of the historic abuses that were inflicted on the generations that came before us (ie. those branded as witches, who had the audacity to go against the established authoritarian religion) and somewhere in our psyche is a message that “if you step out of line, you’ll get whacked”.

And sometimes, though we feel genuinely confident in our abilities, we don’t want to APPEAR too confident for fear of alienating people. We’re mistaken about what it takes to build community, thinking that by not “showing off” our skills, we don’t make other people feel insecure about their lack of them. But that’s building community on an unstable foundation – you’re much better off being honest and building trust with people. Being falsely humble rarely makes anyone feel comfortable and it cheats people out of the opportunity to benefit from your skills and/or learn from you.

Developing confidence (and revealing yourself to be confident) may take a lot of work for you – to unlearn your old habits and let go of your social conditioning, to distance yourself from those who might ridicule your confidence, to heal the wounds that might have been inflicted on you or those who walked before you – but it’s worth it. And those who are genuinely YOUR people, who want whatever you have to offer (even your children, who feel more safe when you are confident) – they WANT to see you shine.

If YOU shine, then they feel more secure and THEY can shine too.

p.s. Registration is now open for the next offering of the Holding Space Practitioner Program, starting October 2019. To grow your own confidence in how you hold space for other people, check it out.