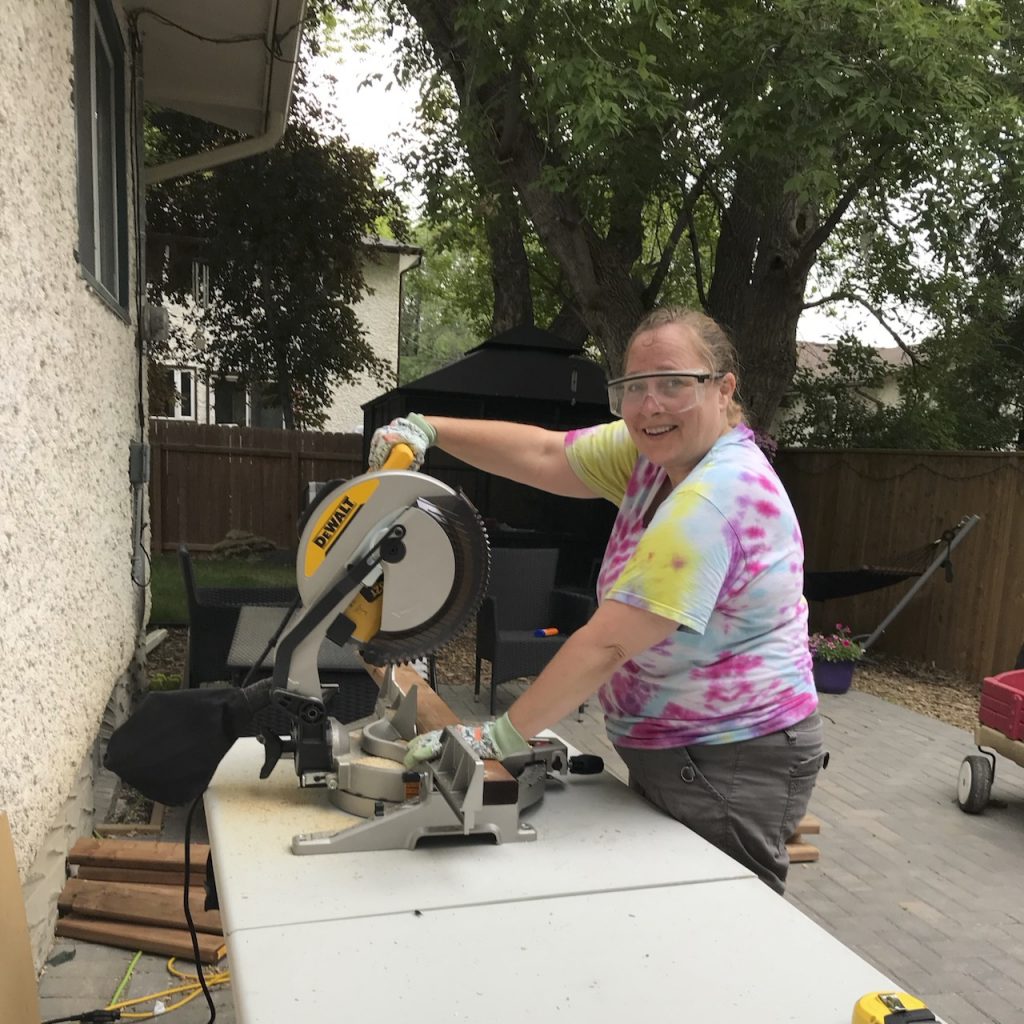 “Can you believe my mom built an ACTUAL couch?!” Those words made me chuckle when my daughter said them to her friend. Every mom secretly covets a Daughter Brag, especially from a teenager.

Yes, I built a couch. And a coffee table to go with it. (As well as a bonus barbecue table out of the scraps.) It’s for outdoor use, built with 2X4s and covered with foam cushions that I shaped to fit and sewed covers for. It’s rough, imperfect, and simple… but it’s magnificent. And it’s big enough to host a party.

A month ago, on Father’s Day (because… what better day to buy something for yourself when you’re a single mom, and what better day to find a sale at the hardware store?), I bought a compound mitre saw. It’s a scary-beautiful thing and I’ve wanted one for a long time. It’s scary, because a part of me was scared I’d slice off a finger the first time I tried to use it. And it’s beautiful because it makes me feel powerful and self-reliant. Even in the weeks before I found time to use it, when I’d gaze at it sitting on my garage floor, I’d feel a rush of excitement just because it’s mine. It’s a badass woman who keeps a power saw in her garage!

Why did I build a couch? Because I’m not in the habit of starting with small projects once I decide to try something. I thrive on the rush of adrenaline that comes from diving into something big that almost tips me into overwhelm. It’s what keeps me going and keeps me excited and keeps me challenged.

And also because a couch feels like self-reliance, resourcefulness, and self-empowerment. If I can build my own furniture, I have the power to craft my own environment.

The couch-building was SO MUCH FUN. Cutting wood with a compound mitre saw was SO MUCH FUN. I worked for long hours in shady spots on my patio (and then in the garage when it rained), often forgetting to eat, because, like a child who has to be told it’s suppertime, I was so engrossed in play. 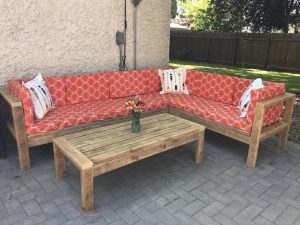 The compound mitre saw makes me feel like I’ve found my way back to the little girl I once was – the little girl who was most happy when she was living wild, building teepee-like structures with a friend in the woods on our farm and then begging her mom to lend them a pot and let them pick vegetables from the garden so they could cook their own stew on the fire at the centre of the teepee. Or the little girl who would spend hours on her horse, racing down country lanes, wondering what might be around that next corner. Or the little girl who begged her dad to teach her how to drive a tractor, because she wanted to be just as empowered and self-reliant as her big brothers.

I want a big, beautiful, powerful, adventurous, self-reliant, openhearted life. I want a life where scary-beautiful compound mitre saws are possible and adventure is always just around the next corner. I want a life that takes me to the edges of my comfort, and then nudges me past, into the unknown.

I’m not saying it’s what everyone should want, but it’s what I want. It’s what I’ve ALWAYS wanted – even when I didn’t speak it out loud.

It took me a long time to believe I was worthy of a big, beautiful, powerful, adventurous, self-reliant, openhearted life, or even that I had the right to ask for it. I believed it as a little girl in the makeshift teepee in the woods, but then, little by little, it was trained out of me. Like a wild animal who’s been domesticated and then forgets how to survive in the wilderness, I lost sight of my wildness for a long, long time. I’m fifty-three and I feel like I’ve just now, in the four years since my divorce, come back to it once again.

It was trained out of me in all of the little ways that girls are trained not to ask for too much. In the playground when the boys got to be wild and adventurous and the girls were expected to be quiet and polite. In Sunday school when I was taught that my desires were sinful and should never be entertained (unless they were in alignment with God’s desires). In grade school when I was taught that nice little girls shouldn’t be too loud or too bossy or too demanding or too smart (and they should certainly never use power tools). In youth group when I was taught that I should seek a good man and become a good wife. At home when I was taught that women weren’t allowed to be in leadership positions or drive tractors or have too many opinions or speak from a podium. In junior high when girls could only take sewing and cooking classes while the boys got to play with power saws and wood.

It was trained out of me in all of the little ways that wives and mothers are shamed into giving up who they are to accommodate their husbands and children. In the ways my needs came second (or third) and keeping the peace meant giving myself up, inch by inch. In the guilt-inducing comments I’d get from friends and strangers after a business trip about how hard it must be for my children when I’m away. In the way my ex-husband’s insecurity and fear of the world were projected onto me and shamed me into staying small. In the way women’s magazines focus on decorating and dieting while men’s magazines focus on strength and adventure.

It was trained out of me, but it was still there, lurking under the surface. Every time it would emerge and I’d speak too loudly or do something dangerous or step out of line or want too much it would be stuffed back in, either by the shaming comments from someone who wanted me to behave, or by my own internalized oppression. As I said in a Facebook post earlier this week… Those with internalized oppression are the best at policing and silencing themselves. That’s how abuse works – at some point you don’t need the abuse to keep you silent, you simply need the body memory of it.

Several years ago, a friend met someone who knew me in high school and asked that person what I was like back then. “Nice. And quiet.” was the response. Those three words have haunted me for a long time. What a boring way to be described! I don’t WANT to be “Nice. And quiet.” That’s the version of me that I’ve been trained to be and I’m done with it. I want to be something different – more wild, more dangerous, and more powerful.

My ex-husband used to say, when he was feeling insecure and needy, “Some day you’ll be successful and you’ll leave me. You’ll publish a book and buy a fancy car and you won’t need me anymore.” It used to make me angry, because it was passive-aggressive and meant to make me feel guilty for the kinds of desires that would take me away from him. He wasn’t entirely wrong, though – it was in re-discovering my own power and self-reliance that I found the courage to walk away from a relationship that wanted to keep me safe and small.

I re-awakened her, and though I had to abandon the version of God who wanted to punish me for wanting to much, I have found instead a God/dess who thrives in my wildness, who created me to be this way and who dances with me through this big, beautiful, wild world.

In this stunning, truth-telling article (which my daughter forwarded to me because we’ve been having many conversations about what women give up in the months since she broke up with her boyfriend of three years), there’s a story from Japanese folklore of a crane who plucks out her own feathers so that a man will marry her. In doing so, she loses her identity and her ability to fly. “To keep becoming a woman is so much self-erasing work. She never sleeps. She plucks out all her feathers, one by one.”

In my work, I often talk about the difference between safe space and brave space. Safe space is necessary for the healing phase of our journeys, but if we stay there too long, we get comfortable and then safe becomes oppressive and growth doesn’t happen. In safe space, we start silencing others who present dangerous ideas that make us uncomfortable. Growth is limited in safe spaces.

In brave space, on the other hand, we agree to the risks inherent in speaking dangerous things into the circle and living close to the edge. We agree to occasionally make each other uncomfortable (and accept it from others) because we know that it will help us grow. We agree to look at our own blindspots and the ways in which we’re addicted to comfort.

I want to live in brave space. That’s why I’m buying power saws that might cut off a finger but that allow me to build beautiful things. And that’s why I’m growing my team and pushing the edges of my workand traveling around the world to be in places and sit in circles that nudge me into discomfort. I spent many years in safe space, healing the wounds of the past, and that was a valuable investment for a time, but now I want brave space.

Some day, I might find myself in another intimate relationship. I am not so fiercely self-reliant that I don’t crave intimacy and community and someone to walk alongside me in my adventures. Sometimes self-reliance becomes lonely and hard and closed off – I don’t want that.

I will bring my wildness and I will embrace those who want to walk alongside me on this brave adventure – whether in an intimate partner relationship or in the many beautiful friendships I am fostering all over the world. I will bring my power tools and my willingness to walk on the edges and do brave things and I will support others in doing the same.

We will gather around fires in wild spaces and we will talk of our adventures and our fears and we will help each other find our way back to our wild selves.

This week, I plan to sleep on my new couch, outdoors, under the gazebo (which I also built), because that’s what a wild woman would do.

p.s. If you want to be in circle with others exploring brave space, come join us in the Holding Space Practitioner Programwhich starts again in October 2019. Or come join me in an openhearted writing circle in B.C. in August.