This is my Winnipeg: addressing racism with open hearts

What do you do when your city has been named the “most racist in Canada“?

Some people get defensive, pick holes in the article, and do everything to prove that the label is wrong.

Some people ignore it and go on living the same way they always have.

And some people say “This is not right. What can we do about it?”

When that story came out, some of us felt like we’d been punched in the gut. Though it’s no surprise to most of us that there’s racism here, this showed an even darker side to our city than many of us (especially those who, like me, sometimes forget to turn our gaze beyond our bubble of white privilege) had acknowledged. Insulting our city is like insulting our family. Nobody likes to hear how much ugliness exists in one’s family.

Note: I have been challenged to reflect on my language in the above paragraph. Originally it said “all of us felt like we’d been punched in the gut” and that is not an accurate reflection. Instead, some felt like it was a relief that these stories were finally coming out. I appreciate the challenge and will continue to reflect on how I can speak about this issue through a lens that allows all stories to be heard. That’s part of the reason I’m in this conversation – to look inside for the shadow of colonialism within so that I can step beyond that way of seeing the world and serve as a bridge-builder.

As I mentioned in an earlier post, I began to wrestle with what it would mean for me to be a change-maker in my city. I emailed the mayor and offered to help host conversations, I sat in circle at the Indigenous Family Centre, I accepted the invitation of the drum, and I was cracked open by a sweat lodge.

I shared my interest in hosting conversations around racism on Facebook, and then I waited for the right opportunity to present itself. I tried to be as intentional as possible not to enter the conversation as a “colonizer who thinks she has the answer.” It didn’t take long for that to happen. 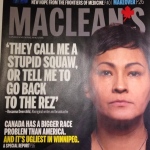 Rosanna Deerchild was one of the people quoted in the Macleans article, and her face made it to the front cover of the magazine.  Unwillingly and unexpectedly, she became the poster child for racism. Being the wise and wonderful woman that she is, though, she chose to use that opportunity to make good things happen. She posted on her own Facebook page that she wanted to gather people together around the dinner table to have meaningful conversations about racism. A mutual friend connected me to her conversation, and I sent her a message offering to help facilitate the conversation. She took me up on it.

At the same time, a few other people jumped in and said “count me in too”. Clare MacKay from The Forks said “we’ll provide a space and an international feast”. Angela Chalmers and Sheryl Peters from As it Happened Productions said “we’d like to film the evening”.

With just one short meeting, less than a week before it was set to happen, the five of us planned an evening called “Race Relations and the Path Forward – A Dinner and Discussion with Rosanna Deerchild”. We started sending out invitations, and before long, we had a list of over 50 people who said “I want to be part of this”. Lots of other people said “I can’t make it, but will be with you in spirit.”

In the end, a beautifully diverse group of over 80 people gathered.

We started with a hearty meal, and then we moved into a World Cafe conversation process. In the beginning, everyone was invited to move around the room and sit at tables where they didn’t know the other people. Each table was covered with paper and there were coloured markers for doodling, taking notes, and writing their names.

Before the conversations began, I talked about the importance of listening and shared with them the four levels of listening from Leading from the Emerging Future.

“What we really want in this room,” I said, “is to move into generative listening. We want to engage in the kind of listening that invites new things to grow.” 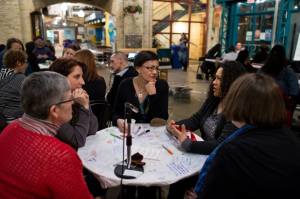 For the first round of conversation, everyone was invited to get to know each other by sharing who they were, where they were from, and what misconceptions people might have about them. (For example, I am a suburban white mom who drives a minivan, so people may be inclined to jump to certain conclusions about me based on that information.)

After about 15 minutes, I asked that one person remain at the table to serve as the “culture keeper” for that table, holding the memories of the earlier conversations and bringing them into the new conversation when appropriate. Everyone else at the table was asked to be “ambassadors”, bringing their ideas and stories to new tables.

For the second round of conversation, I invited people to share stories of racism in their communities and to talk about the challenges and opportunities that exist. After another 15 minutes, the culture keepers stayed at the tables and the ambassadors carried their ideas to another new table. 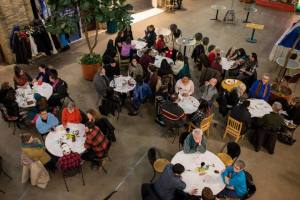 In the third round of conversation, they were asked to begin to think of possibilities and ideas and to consider “what can we do right now about these challenges and opportunities?”

The one limitation of being the facilitator is that I couldn’t engage fully in the conversations. Instead, I floated around the room listening in where I could. This felt a little disappointing to me, as I would have liked to have immersed myself in the stories and ideas, but at the same time, circling the room gave me the sense that I was helping to hold the edges of the container, creating the space where rich conversation could happen. 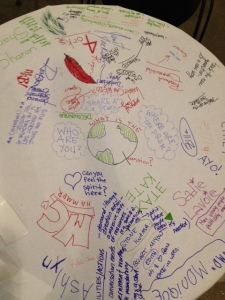 After the conversation time had ended, the culture keepers were invited to the front of the room to share the essence of what they’d heard at their tables. Some talked about the need to start in the education system, ensuring that our youth are being accurately taught the Indigenous history of our country, others talked about how this needs to be a political issue and we need to insist that our politicians take these concerns seriously, and still others talked about how we each need to start small, building more one-on-one relationships with people from other cultures. One young woman shared her personal story of being bullied in school and how difficult it is to find a place where she is allowed to “just be herself”. Another woman shared about how hard she has had to work to be taken seriously as an educated Indigenous woman.

One of the people who shared mentioned that the Macleans article was a “gift wrapped in barbed wire”. Those of us in the room have chosen to unwrap the barbed wire to find the opportunities underneath.

Another person said that the golden rule is not enough and that it is based on a colonizers’ view of the world. “Do unto others as you would have them do unto you” has to shift into the platinum rule, “Do unto others as they would have you do unto them.” To illustrate his point, he talked about how Indigenous people go for job interviews and because they don’t look people in the eye and don’t have a firm handshake, people assume they don’t have confidence. “Understand their culture more deeply and you’ll understand more about how to treat them.”

As one person mentioned, “the problem is not in this room”, which was a challenge to us all to have conversations not only with the people who think like us, but with those who think differently. Real change will come when we influence those who hold racist views to see people of different nationalities as equals.

There were many other ideas shared, but my brain couldn’t hold them all at once. I will continue to process this and look back over the notes and flipcharts. And there will be more conversations to follow. 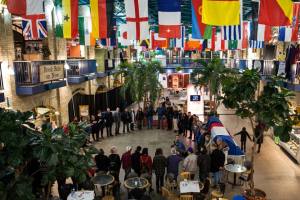 After we’d heard from all of the tables, we all stood up from our tables and stepped into a circle. We have been well taught by our Indigenous wisdom-keepers that the circle is the strongest shape, and it seemed the right way to end the evening. Once in the circle, I passed around a stone with the word “courage” engraved on it. “I invite each of you to speak out loud one thing that you want to do with courage to help build more positive race relations in our city.” One by one, we held the stone and spoke our commitment into the circle.

We took the energy and ideas in the room and made it personal. Some of the ideas included “I’ll read more Indigenous authors.” “I’ll teach my children to respect people of all races.” “I’ll take political action.” “I’ll take more pride in my Indigenous identity.” “I will host more conversations like this.” “The next time I hear someone say ‘I’m not racist, but…’ I will challenge them.” “I’ll continue my work with Meet me at the Bell Tower.” “I will bring these ideas to my workplace.” “I will find reasons to spend time in other neighbourhood, outside my comfort zone.”

I didn’t realize until later, when I was looking at the photos taken by Greg Littlejohn, that we were standing under the flags of the world. And the lopsided circle looks a little more like a heart from the angle his photo was taken.

This is my Winnipeg. These eighty people who gathered (and all who supported us in spirit) are what I see when I look at this city. Yes there is racism here. Yes we have injustice to address. Yes we have hard work ahead of us to make sure these ideas don’t evaporate the minute we walk out of the room. AND we have a beautiful opportunity to transform our pain into something beautiful.

We have the will, we have the heart, we have a community of support, and we have the opportunity. A year from now, I hope that a different story will be told about our city.

Note: If you’re wondering “what next?”, I can’t say that for certain yet. I know that this will not be a one-time thing, but I’m not sure what will emerge from it yet. The organizers will be getting together to reflect and dream and plan. And in the meantime, I trust that each person who made a commitment to courage in that circle, will carry that courage into action.