That thing you love to do? It is not trivial. 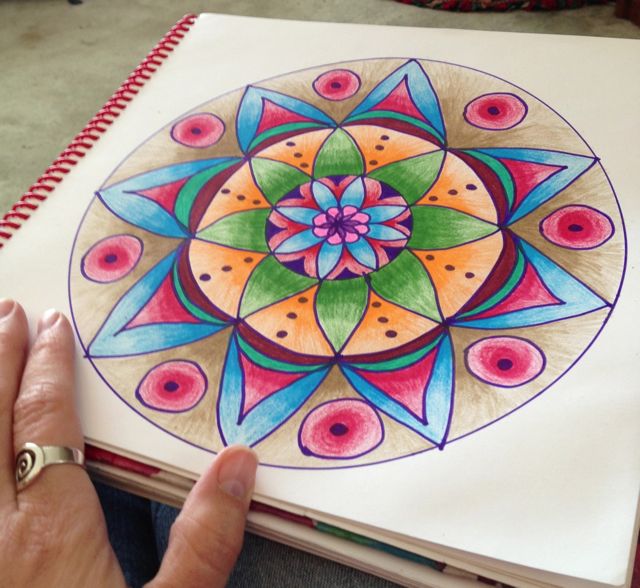 I see more and more women (and some men) who are finding their way back to the things they love to do – painting, dancing, writing, hosting, horseback riding, hiking, taking pictures, acting, etc.

I work with a lot of these people, in my coaching and workshop facilitation, and I love to see the delight in their eyes when they talk about what they truly love to do. Some, for example, sit in my Creative Writing for Self-discovery circle and talk about how writing poetry feels like a homecoming – like something they’ve been longing for but didn’t know they were missing. Others start playing with mandalas and can’t believe how much joy it brings them to hold pencil crayons in their hands again.

Almost always, though, I see that delight in their eyes fade when I ask them “why don’t you do more of it?” They stammer a reply that sounds remarkably similar to all of the other excuses I’ve heard (I’m too busy, it makes me feel guilty, my partner makes fun of me, I can’t take the time away from my kids, etc.). And when they come back a week later, they sheepishly say “I wanted to do the homework, but couldn’t find the time.”

The bottom line is that they have been fed a lie that what they love to do is trivial. It’s the thing you do only if you have time after all of the important things are done. It’s just a hobby, so shouldn’t be taken as seriously as washing the dishes or crunching numbers at the accounting office you work at.

I have struggled with this lie in my own work too. Sure I teach transformational workshops online and off, but it’s not really that important, is it? It’s just stuff people do on the fringes of their lives – it doesn’t fit in the “mainstream” where people are doing real work. Even though I believe in it deeply and know it can transform people and communities, I have trouble marketing my work in the corporate world, because… well… won’t people make fun of me for trying to sell something so trivial in a serious environment?

Mandala journaling? That’s fine for people with time on their hands, but don’t try to get a serious corporate executive to colour in a circle. It’s far too trivial for someone with an important job title. Gathering in circle? Oh that’s just for women who aren’t doing the big, important work in the world. It’s not going to fly in places where people are having tough conversations and changing the world.

But it’s all a lie, and I know that. It’s the lie the patriarchy has been telling us for hundreds of years to keep us silent and to keep us from changing the accepted structures and heirarchy. It’s a lie we’ve been fed again and again, since childhood, and we don’t know how to change it because we’ve received so many wounds over it, we’ve learned to hide our hearts and keep our deepest loves secret.

Imagine if we could rise out of the shame and the fear and truly believe in what we love to do.

Imagine if we could convince governments to move their chairs into circles and have real conversations instead of the polarizing shouting they do at each other from across the room. Imagine if business meetings started with some quiet journaling or mandala-making. Imagine if there was daily dancing in the corporate offices downtown. Imagine if the heads of corporations and governments had to go on vision quests or self-discovery retreats before they could be trusted to lead.

It’s hard to imagine, isn’t it? Your first thought, like mine, was probably “oh, it would never work”. But what if every time we heard that voice of resistance in ourselves, we recognized it as the voice of the patriarchy trying to silence us, and we challenged it instead of accepting it?

A few weeks ago, I co-facilitated a weekend stakeholder consultation for a national association of city planners. Because we knew it would be a difficult conversation, we encouraged them to use circle to ensure that everyone was heard. There was some reluctance to our recommendation, but fortunately we had an ally on the planning committee, and so we went ahead with it. The circle transformed the way they gathered. People made positive contributions throughout the weekend because they felt heard. Important decisions were made AND people felt valued and hopeful.

The circle is NOT too trivial for people who are making important business decisions. In fact, I think it’s imperative.

A few years ago, I was facilitating a team planning retreat for a non-profit, and I invited everyone to start with some simple yoga poses, and then we played with modeling clay and tried to envision our future through clay. Halfway through, one of the people in the room said, “but when are we going to do the real work?” He was anxious to get to the strategic planning we needed to do. I didn’t say much, but when we were finished, we looked at each other’s clay creations and saw a great deal of vision for where the team needed to move. “Oh, I get it,” said the person who had resisted. “This IS the real work.” Yes, it is. We saw more vision emerge from the pieces of clay than we would have in a traditional brainstorming session.

Art-making and yoga are NOT too trivial for people doing world-changing work. In fact, I think it’s imperative.

It’s taken me years to stop believing the lie (and it still creeps in now and then), but I believe that the world is crying out for us to do this work. It’s transformational for EVERYONE, not just the people with time on their hands after the real work is done.

It starts by changing us individually, and with that as a base, it can change governments, change international relationships, change the way we treat our earth, and change our communities.

I believe it’s imperative. The world needs this kind of change. And it will have to start with a healing of our collective wound and a new belief that this is worthy work we are doing.

If you are on the path to the work you love, or you want to step onto that path, consider a journey through Pathfinder.