On cancer, marriage, death, and Easter

“Because we realised that the person who left us did not take the sun with them or leave darkness in their place. They simply left, and with every farewell comes a hidden hope. –  Paul Coelho

Three years ago, on Easter weekend, we found out my mom had cancer. It was a sombre Easter meal we shared at my brother’s house that Sunday. Mom did her best to be upbeat, playing with the grandchildren, making sure everyone was well fed and giving us all as much love as she could. We all tried to do the same, to pretend that everything was going to be okay and that we didn’t risk losing the only parent we had left.

We didn’t do a very good job of lying to ourselves, though. Beneath all of the smiles and the laughter was a river of worry that none of us could deny.

Once you’ve met death and watched it take away a member of your family, you no longer have the luxury of hanging onto the lie that “everything is going to be alright”.

Something else happened that weekend. On the two hour drive home from my brother’s house, my marriage unraveled. We had a big fight (as quietly as possible so as not to alarm the children in the back seat) and I had to speak out loud the unhappiness that was growing in me like my mom’s cancer was growing in her. It was time for drastic measures. We had to either slice out the cancer in our marriage and subject it to months of chemo (in the form of therapy) or it would die. 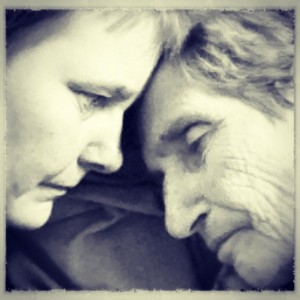 By now you probably know what happened to my Mom. She had surgery and months of chemo and the doctors thought they had been successful in arresting the cancer. But only three months after she’d gotten the “all-clear” (which happened a year after her diagnosis), they discovered that the cancer was still growing and was now beyond treatment. Three months later, with all of her children gathered around her, she left us to join Dad in eternity.

As for my marriage, a rather similar pattern took place. We went for months of counseling, worked on the baggage we were both carrying, learned to talk to each other  with more honesty and less anger, and thought we had the cancer licked. We were happy again.

But then the cancer came back. I realized that the anger that had infected me was growing in deeper places than I’d at first admitted to myself. A deeper excavation was necessary. And so we went under the knife again, followed by more chemo.

Our marriage is still alive. Like doctors, we are using every procedure and medicine we can think of to keep it alive. We are trying – like the Japanese artists who mend broken pots with gold so that the break becomes part of the art and history of the piece and adds to its beauty – to mend our marriage with even stronger and more beautiful material than was there when the break happened. 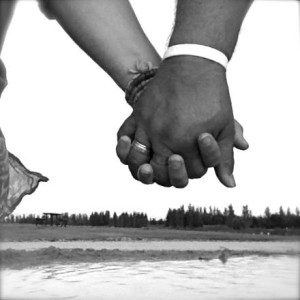 It seems fitting (and perhaps somewhat ironic) that this year, at Easter, I am feeling hopeful again. There is resurrection, there is transformation, there is hope. The gold is beginning to set deep into the cracks and there is beauty emerging out of our brokenness.

In Pathfinder, I wrote about the value of getting lost, of tearing up the map, and trusting that the path will unfold in front of us as it should. That’s a lesson that I have to learn again and again. I want so badly to control the outcome, to fix the cancer in my mom (and now my brother), to find a simple solution for our marriage, or to, at the very least, feel like I’m holding a map in my hand that will show me the topography that’s up ahead. But I don’t get that. I never get that.

I have to let it go and lean further into trust.

In order for real transformation to happen (as we learn in Theory U, which is also shared in Pathfinder), we have to let go of the outcome and our desire to control it, let go of our preconceived notions, let go of the lens through which we view the world, and learn to sense into that which wants to emerge. Along the journey of letting go, we open our minds, open our hearts, and open our wills. Only once we’ve reached the bottom of the U, when what needed to die has been released, can the new thing emerge and begin to blossom.

My friend Laurie Foley was recently told that her cancer is in remission. As she explores what this means and what she is meant to learn from her long months of struggle, she is re-framing remission as re-mission. She’s wondering how this period of her life – the journey through the valley of the shadow of cancer – has changed her life’s mission and what God is asking of her now.

I wonder the same thing. If the cancer in my marriage is in remission (as I hope it is), then what is our re-mission as a couple? What is emerging for us that we couldn’t see before when we were blinded by the struggle? It is our hope that the three year dive into the bottom of the U has allowed something new and beautiful to grow out of the brokenness.

I share this story with you not for any sympathy or advice. I share it simply that you will know that you are not alone. If your marriage feels broken, if your community is falling apart, if your business is failing, take heart.

There is beauty that grows out of the brokenness. There is hope even in loss.

Yes it’s true that sometimes there is no stopping the cancer and someone or something dies. Your marriage may end, your best friend may die, you may lose your job or your home. We can’t change that, no matter how hard we try.

But that doesn’t mean it’s the end. It doesn’t mean you’re finished. It means that you’re finding yourself at the bottom of the U and someday, when you have let go and opened yourself up to some new possibility, the light will appear again and a new seed, planted into the compost of what has died, will begin to sprout.

In the Easter story, Christ had to give up his life on the cross before he was ready for his own re-mission. Only when his surrender was complete and death had taken him could he rise again and live out his calling to be fully God.

That story always makes me think of butterfly metamorphosis. A caterpillar must give up its caterpillar-self in the gooey mess of the chrysalis before it can emerge as a butterfly. In the same way, we have to release that which no longer serves us – let it fall broken in a heap at our feet – before we can emerge into the beauty that calls us forward.

It is my hope this Easter (whether or not the Easter story is part of your faith tradition) that you will find beauty in the brokenness, that you will recognize the value of getting lost, and that you will learn to see the light that peeks into your shadows.

And if you find yourself lost, somewhere on the journey through the U, consider joining us in the Pathfinder Circle. Your brokenness, your questions, your growth, your curiosity, and your grief will be held in a circle of grace.