What I love about The Circle Way 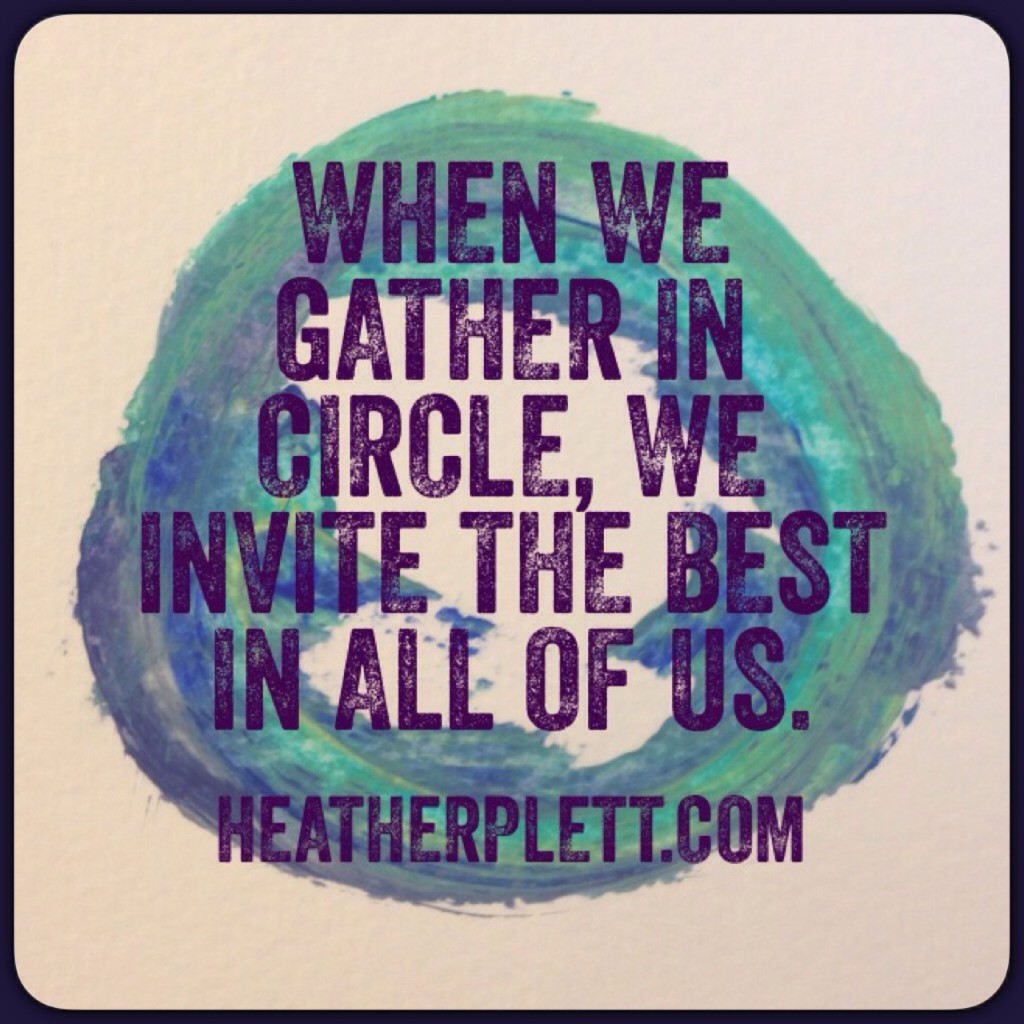 As I mentioned in this post, two weeks ago, I was on Whidbey Island, gathered with 25 other people to work on the building of The Circle Way Initiative, an extension of the circle work of PeerSpirit. I’ve wanted to write a follow-up post ever since, but sometimes the experience of something feels too important to try to put it into words right way. Sometimes it simply needs to sit for awhile in the heart space before it can enter the head space where language resides.

As I mentioned in the earlier post, I fell in love with the idea of The Circle Way when I first encountered the work of Christina Baldwin and Ann Linnea thirteen years ago. It took awhile before I had fully embraced it and could use it confidently in my work, but now it is central to everything I do. I use it in the classroom, in retreats, in group consultations, and even in online spaces.

The Circle Way helps us cut through complexity to the simplicity on the other side.

By gathering people into a circle where we can all look into each other’s eyes, using some simple structure, principles and practices to help hold the conversation, and being intentional about the way we engage with each other, we can dramatically shift our conversations. I’ve seen it happen again and again. People engage more intentionally than they normally do, conflict is resolved in constructive ways, and there is honesty and authenticity in the way we show up for each other.

If you’d like to learn more about how to host your own circle, you can download PeerSpirit’s Basic Guidelines here, or you can buy the book.

Here are some of the things I love about The Circle Way:

2. It cuts out distraction and holds focus. I’ve sat in many meetings and classrooms where only half of the people in the room are engaged and the other half are in side conversations or checking their smartphones. That rarely happens in a circle, and if it does, it will be called out by the others in the circle and rarely needs to be addressed by the host. People are much more attentive when they know they are being witnessed and when they are invited to witness each other.

3. It calls out the best in each of us. In circle council, we talk about each person in the circle “holding the rim” for each other. That means that the circle is not complete without each person taking his/her seat and committing to being part of that circle. Together we hold the container, giving each other space for growth, grief, courage, and fear. If people in the circle take that seriously (and they usually do, because it feels like an honour to be invited into this sacred space), remarkable things can happen and people can step into their own greatness. In our gathering on Whidbey Island, for example, each person stepped forward, offered their gifts, and took on the work of making The Circle Way Initiative a reality. When you’re invited into a space where there’s a leader in every chair, you’re much more inclined to contribute what you have to offer.

4. It allows us to be more intentional and listen more deeply to what is being said. By using things like a talking piece and a bell, the conversation is slowed down, there is less interruption, and there is intentionality in how we listen to each other. The talking piece is used to give each person our undivided attention. The bell is used to create pauses in the conversation when something particularly profound is said, or there is conflict or a need for a shift in energy. In addition, the circle creates a space where we are all looking into each other’s eyes instead of turning our backs to each other.

5. It invites people to step out of judgement and into grace. When you are invited to listen to people’s stories with openness and intention, not interrupting or giving advice, you learn to practice grace and non-judgement. Each person has value and nobody’s contribution is worth more than another’s. I have seen people enter the circle with resistance and judgement toward others in the circle, and before long things shifted and they were listening to each other in a more intentional way.

6. You can get lots of work done without feeling overly constricted by too much process. In some facilitation processes, there is so much complexity or restriction in the way the process unfolds that there is less room for creativity and spontaneity. The circle creates a more intuitive space, with just enough gently applied structure to keep things from going off the rails. At our gathering, we were all divided into work groups, and each group used the circle principles to guide their conversations. A great deal of work was accomplished and a lot of creativity showed up. There was just enough structure to hold it and not too much to limit it.

8. There is space for intimacy and community. I have been to a lot of conferences, retreats, and other gatherings, and without fail, the ones that are held in circle always result in the most intimate conversations and new friendships. Something special happens when you gather in circle, look into each other’s eyes, listen with intention, and hold space for each other. It spills out into the coffee breaks and lunch hours, and you take it home with you after the gathering has ended.

If you’d like to be in circle with me, there are a few upcoming opportunities:

2. Circles of Connection – Wasaga Women’s Weekend (where I’ve been invited to be the guest speaker)

3. Gather the Women – Annual Gathering (where I’ll be an active participant)