What does it mean to step into our power?

Almost every woman I know has an uneasy relationship with power.

Some of us want it but are not sure how to get it. Others have it and don’t know how to use it well. Some of us believe we’re unworthy of it, so we pretend we don’t need it. And many of us have been abused by it, so we don’t trust it.

We feel uneasy about power largely because we haven’t figured out what feminine power looks like.

Primarily, we see masculine power modeled in the world, and sadly, masculine power that isn’t well balanced with feminine power degenerates into patriarchal power. In order to maintain its power, the patriarchy abuses and marginalizes people and forces them to give up their power in exchange for their safety. Like we see in many situations around the world, by casting people into fear, those who abuse power render others powerless.

Many of us who yearned for some measure of power (myself included) found ourselves in environments where we were expected to model a masculine version in order to succeed (or even survive) in the world. Instead of being obliterated, we figured out how to assimilate.

When I was in leadership in government and non-profit, I heard repeatedly that I needed to “have a thicker skin”, “be more decisive”, “have a clearer vision”, and “be more of a director and less of a consensus-builder”. Over time, I learned to put on the mask of the kind of power that was most accepted in the workplace. 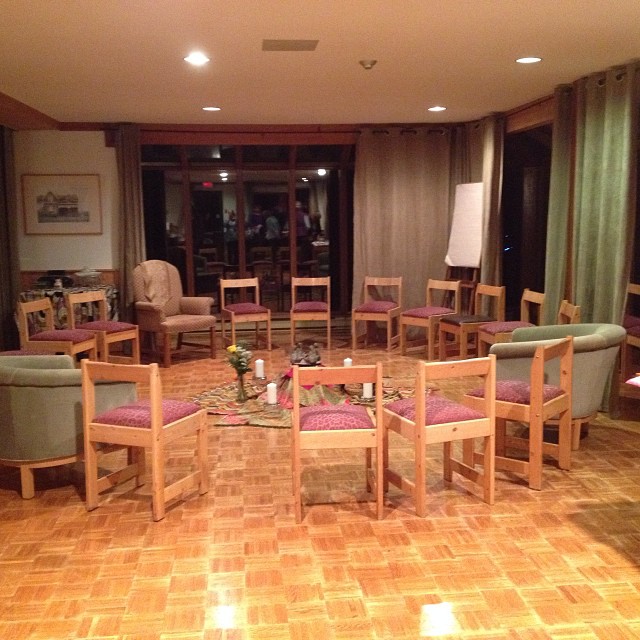 But like putting on someone else’s skin, it never quite fit. I wanted to lead in circles, I wanted to bring my passion, emotions, and spiritual quest to my work, and I wanted to feel more connected to myself and to my team. Though I tried, there wasn’t much support for me to lead from an authentic place or find a power that was outside of the accepted model.

In disillusionment, I started asking questions about what power meant and how it might look differently for me personally and for women generally.

Some of my answers came from a book called Power and Love by Adam Kahane. As a consultant, Kahane worked in many high profile, high conflict situations, such as post-apartheid South Africa. He was convinced that in these places where power had been so badly abused, what was needed was more love. Over time, however, he realized that love alone wouldn’t resolve the conflict. What was needed was a balance of love AND power.  He came across the following quote from Martin Luther King and it changed his perspective dramatically.

“Power without love is reckless and abusive, and love without power is sentimental and anemic. Power at its best is love implementing the demands of justice, and justice at its best is power correcting everything that stands against love.”

In the book, Kahane uses the metaphor of walking, where power is one leg and love is the other. In order to move forward in fluid motion, each leg needs the other and each must lift itself up off the ground and trust the other in a reciprocal, balanced fashion. Only then is there smooth, forward motion.

As I was contemplating this last week while preparing for a workshop on women and power, I pulled out a pair of beautiful soft moccasins I’d received as a gift from a friend. They’d been her own moccasins, but after being with me in circle at the retreat last month in South Dakota, she handed them to me. The note she gave me along with the moccasins said “It makes me so happy to share my most precious slippers with you. They were only used a couple of times when I wanted to connect or feel very close to the Beloved One. They always made me feel like I was stepping on Holy Ground. Sometimes it felt like I was putting on the feet of the Divine.” 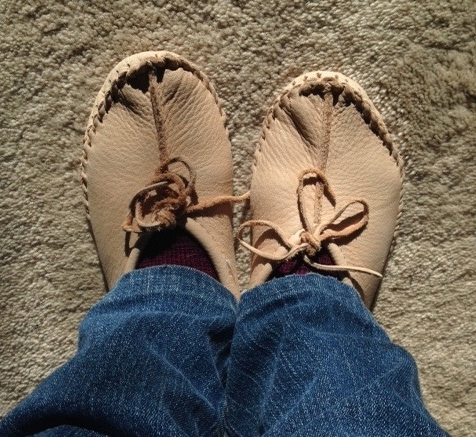 I slipped them on and stood up. They felt wonderful and soft, like a second skin wrapped around my feet. I felt the softness of the leather, the warmth of my friend’s generosity, and the solidness of the Holy Ground I was standing on.

As I wore them, I wondered “is this a clue to how a woman can stand in her power? Does it have something to do with slipping into what’s comfortable, what’s soft, what’s connected to the earth, and what feels as authentic as one’s own skin?”

I took the moccasins with me to the retreat and wore them all weekend. I taught the workshop on women and power while wearing them and invited the women to consider how they might interpret power in their own lives. The more I wore them, the more convinced I became that they would be my new symbol for stepping into my power.

Here’s what the moccasins teach me about standing in the kind of power that’s married to love and that leans toward the feminine:

Today, after returning from the retreat, I attended a peace vigil and was part of a conversation with a woman who works with Christian Peacemaker Team in northern Iraq. She was sharing stories about how the CPT team stands alongside people in Iraq who are working for peace. As outsiders, they don’t take on the role of leader in the difficult negotiation, advocacy, and conflict resolution work that’s needed in places where local villagers are not safe from either the terrorists or the local military, but instead they show up to serve and support them and to share their stories with the world.

It struck me that the work that she and others on her team are doing is the kind of power that stands in moccasins instead of combat boots. It feels the soil of the local place and let’s itself be impacted, but doesn’t force itself into situations. It’s attentive, supportive, strong, and present. It recognizes the Divine in the land and in each person it meets. Like the Buddhist warriors with their “strong backs and soft bellies” it shows up in both strength and vulnerability. It has the courage to show up and speak truth to power and the wisdom to know when to be silent.

When someone commented on this woman’s courage, she answered humbly “well… I have moments of courage”. And then she shared a moment when the military opened fire into the crowd she was part of and she completely melted down and had to be comforted by the local villagers.

That’s the kind of model of power we need. It’s not fearless and it’s not forceful. It’s gentle and vulnerable. Sometimes it falls apart but it keeps showing up to do the work that needs to be done.

Sister, step into your power.

If you want to learn more about what it means to step into your own authentic power, consider signing up for The Spiral Path: A Woman’s Journey to Herself.