Learning not to over-explain myself 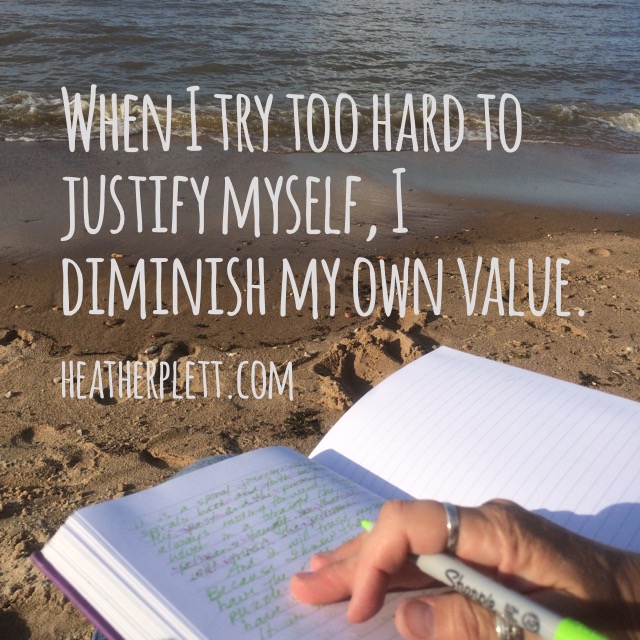 Three years ago, I finished writing a memoir. After more than a year of hard work, I was pretty sure it just needed the eyes of an editor to find the spelling errors and smooth out the rough spots. I started working on getting it published.

But then, life got in the way. My Mom’s cancer came back with a vengeance, and soon she was slipping away from us. Losing her knocked the wind out of me and I had nothing to give to the book.

Last year, I went back to the book, but it held very little energy for me anymore. The loss of mom had changed the end of the story, and when I read through it again, I knew that there were big sections of it that needed re-writing. Several times, I tried to revisit it, and once or twice thought I was finally getting back into the groove, but in the end, it always fell flat and I abandoned it. There was something missing and some parts that simply didn’t flow.

Earlier this year, I decided I’d take the book to the Self as Source of the Story writing retreat on Whidbey Island. I told myself that if I found any inspiration to bring it back to life, I’d stick with it, but if not, I’d finally let it die.

Almost as soon as I got there, life was breathed back into it. A new and intriguing voice emerged that wanted to be heard in the story, and it was instantly clear that that’s what had been missing from the first version. As Christina Baldwin says, “I wrote like heaven.”

When I came home, though, it was harder to find that voice again and I worried that it was only something I could tap into in the magical retreat centre on Whidbey Island. With end-of-school activities consuming much of my attention, I let the book rest for awhile.

And then one day I had the inspiration to ask my friend Louise about the availability of her cottage. Perhaps if I secluded myself in a cottage by the lake for a week the new voice and the energy to complete the book would return. I was right. For five days, I again wrote like heaven. 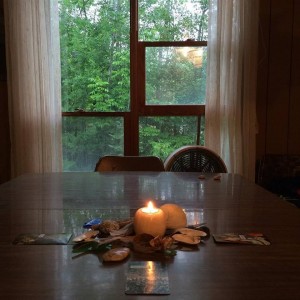 where I wrote for 5 days

At the end of the week, when I’d finished weaving the new voice in with the old, I started the painstaking work of going through it all page by page, trying to find the weak spots. As I did so, I bumped up against some of the old resistance that showed up last year. Suddenly, I doubted whether the book was any good. There were still large sections of it that didn’t flow well and I wasn’t sure it was worth trying to fix them.

I did the only thing I knew to do – I stood up from my computer and went for a long walk on the beach. Somewhere in the middle of the walk, after finding treasures on the beach and watching pelicans float in spirals across the sky, I knew what I had to do. I had to be ruthless and chop out the pieces that didn’t work.

I went back to my computer and started chopping. Anything that felt awkward or that didn’t fit with the new rhythm of the book disappeared into the ether. Almost 10,000 words disappeared in short order and it felt surprisingly good.

Halfway through that process I realized that the pieces being chopped had something in common.

I was cutting out every piece where I tried too hard to explain myself.

I wasn’t letting the story speak for itself. Instead, I was interjecting, offering ways for the reader to understand the story. In doing so, I was not only dragging down the flow of the story, but I was treating the reader like he or she wasn’t smart enough to weave together the threads and draw his or her own conclusion. Most importantly, I was treating the story like it didn’t have enough merit to stand on its own without explanation.

It suddenly occurred to me that what I was doing when I wrote the first draft of the book is the same thing I do in my life – I over-explain myself. This summer, for example, I decided that I wasn’t going to take any new coaching clients. Each time someone writes asking me to coach them, I feel badly about saying no and I feel a need to justify myself. I do the same when I’m teaching and I have to make an unpopular decision – I over-explain it to the students instead of simply saying “this is my decision”. And I do it in my relationships too. If I’m tired and don’t want to pick up one of my daughters from work, I feel compelled to give her an explanation.

What am I doing when I over-explain myself? I’m diminishing my own value. I’m treating myself like I don’t have a right to make these decisions unless I have a good reason to justify them. I’m letting other people’s stories be more important than my own. And I’m giving in to the fear that I might be rejected if I don’t have a good enough reason for my choice.

When I made that realization, a little snippet of a Bible verse came back to me… “Let your yes be yes and your no be no.”

I’m not sure what the writer’s intent was when he wrote that passage, but I know what it now means for me.

If you’ve made a decision from a place of integrity, there is no need to justify it to anyone.

Don’t diminish the value of your own story by over-explaining it.

Don’t treat yourself like you don’t have the right to make a decision a certain way by over-explaining your reason for it.

When I cut out those 10,000 words of explanation, I knew right away that the book was stronger and easier to read. The story can stand on its own merit. Too much explanation takes away from the poetry of it.

The same is true when I cut out the over-explaining from my vocabulary. My choices can stand on their own merit. Too much explanation diminishes my strength and questions my value.

Let your yes be yes and your no be no.

Do you want to learn to write from an open heart? The next Openhearted Writing Circle is on September 18th and it’s online so anyone with a computer can join!

Looking for a self-discovery practice that will help you learn to trust yourself more? Mandala Discovery starts on August 1st.