Safety: My privilege, my trap, and my right 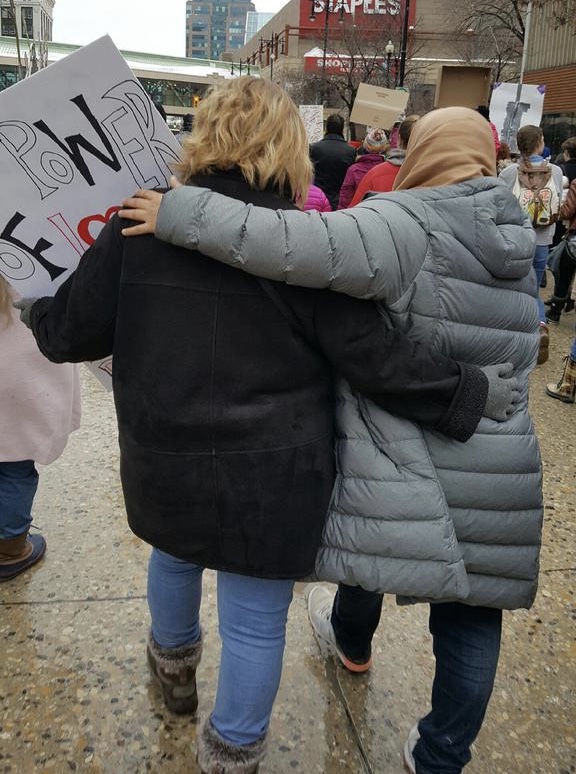 The atmosphere was rather festive as my daughters and I made banners for the women’s march. They’re not new to political activism, having been raised in a home where political dialogue is as common as mashed potatoes, but this was the first time all four of us were going to a march together and the first time we were all making our own banners. One chose a Star Wars reference and another chose Hamilton – their pop culture of choice. They dressed up and I teased them with “this is the resistance – not a fashion parade.” They retorted with “Feminism has evolved, Mom. Our generation believes we can look cute AND resist at the same time.”

On the way downtown, we picked up Saleha, a Muslim friend who’s lived in Canada for 10 years. She was excited and passionate about the march – her first political action of this kind.

The meeting place quickly filled with thousands of marchers – predominantly white women, some wearing pink pussy hats, some holding signs. As people gathered, one of the organizers announced that an Indigenous elder would be smudging whoever was interested. Saleha was eager for the opportunity, so we got in line. I stood by and watched a beautiful moment unfold – Saleha opening her hijab like a tent to let the smoke touch her face and her ears, while the elder offered gentle guidance. When Saleha turned away, the emotion on her face told me how moving it had been.

Leaning on a rail on the second floor of the meeting space, we watched the speakers and drumming group on stage. A mix of intersectional voices – Indigenous, immigrants, transgender, and women of colour – inspired us to consider ALL human rights, not just those that have been too often centred in marches like these (able-bodied, cisgender, heterosexual white women).

Slowly, the crowd made its way onto the street. As soon as we stepped onto the street, I sensed something had changed in Saleha’s demeanour. I turned toward her. “Are you okay?” I asked.

“Would you like me to hold your hand?” I asked.

“Yes, I think I need you to,” she responded.

Holding hands, we followed the crowd. Looking around, I tried to find at least one other woman on the street in a hijab, but I could see none. Nor were there many women of colour or Indigenous women. It was mostly women who looked like me – a crowd of white feminists, probably mostly unaware of who was missing. Did all of those other, more marginalized women, avoid the march because they sensed the same feeling of insecurity that was coming up for Saleha?

More than once I turned to her and said “If it feels unsafe to be here, we can step out and leave the crowd.”

“No,” she said. “I want to do this. I’ll stay in it as long as I can.” We kept walking and the stories began to spill. “It’s illegal to protest like this where I come from,” she said. “I once witnessed a friend yanked off the street by the authorities. We didn’t see him again after that.”

“The day after the Paris attacks, I was waiting for a train in Amsterdam when a man shoved his face just inches from mine and started verbally attacking me. Nobody stepped in to stop me.”

On and on it went – the many times she had felt unsafe, just because she was a woman on the street wearing a hijab. The airport security checks when customs officers discovered her last name was the same as one of the 9-11 terrorists, the times she’s dropped her children off at school and teachers or other moms ignored her until they realized she spoke English like them, the drunk man on the street who told her to go back home in front of her children.

“I don’t know why these are all coming up right now,” she said. “Each time something happened, I stuffed it away and told myself I was okay. It was the only way I could carry on – to convince myself I was safe. But I’m not safe. Since coming to Canada, I’ve done everything I can to blend in and to convince people that I’m not a threat. I worked so hard to learn English. And now I will probably cancel my post-grad studies in the U.S. because I’ll be even less safe there.”

More than once, as we walked, she apologized for saying things that might make me, a white woman, feel badly for what people like me had done or said to her. “I don’t want to be somebody who blames white people.”

“Stop,” I said. “You don’t need to apologize. If I am your friend, I need to be able to hear the ways that you feel unsafe around people like me. Even if it makes me uncomfortable, I need to listen. You are not responsible for looking after me in this situation.”

“But I’m not used to this kind of conversation,” she said. “I am much more used to doing whatever it takes to make white women like you feel safe.”

As we walked, I glanced ahead to where my daughters walked, and was suddenly hit with these two realizations:

My friend Desiree is fierce and bold. She says things on her Facebook stream that I don’t have the courage to say and she doesn’t apologize if people take offence to them. Rather than coddling people, she expects them to take responsibility for their own emotional response.

We are quite different in our communication styles and I’ve often wondered about the many factors that contribute to that difference. I chalk up my more conciliatory, sometimes timid communication style to my pacifist, Mennonite, Canadian roots, but lately I’ve considered that it may be more than that. We may have been intentionally conditioned differently by the patriarchy.

For nearly seven years now, Desiree and I have been having periodic conversations about the ways in which we’ve learned to respond to the world differently. As a Black woman living in the southern U.S., her lived experience is quite different from mine. We’re passionate about many of the same things, but we came to these issues from different directions.

After the women’s march, Desiree and I talked about what the march represented, what happened during the march, whose voices were heard, etc. One of our most profound conversations was about the images on social media that portrayed police officers wearing pink pussy hats at the marches.

We went back and forth about what that meant. Did the police just assume that, because the Women’s March was predominantly white women, there would be no danger involved? Was it a purely race-related difference?

And then, something new emerged in our conversation – the possibility that the police were serving as agents of the patriarchy, keeping white women in line by appeasing them and convincing them they were there to protect THEM from outside forces rather than protecting OTHERS from them. When they show up with riot gear, they’re protecting the community from the protestors. When they put on pussy hats, they’re signalling that they’re protecting the protestors.

And that, we theorized, is one of the reasons that there is fragility among white women (and why someone like me might adopt a more timid, conciliatory communication style) – because we have been conditioned by the hierarchy to believe that our fragility keeps us safe. As long as we are fragile, the patriarchy protects us. When we are no longer fragile, the patriarchy withdraws its protection and we are at risk.

The patriarchy benefits from the fragility of white women.

Women of colour, on the other hand, don’t have the luxury of being fragile. They are taught to survive at whatever cost, usually by their own means and without the help of those in authority. They don’t grow up assuming that the police will protect them if they are fragile. They grow up with images of the police protecting the community from them, not the other way around.

This is how the patriarchy keeps us both in line – by keeping us separate and at odds. It’s the same way that apartheid worked in South Africa. The white establishment created fractions between the local tribes, giving some more access to education, jobs, etc. When they were fighting amongst themselves, they did not present a threat to those in power. If you look around at the places where women are gathering to develop political actions such as the Women’s March, you’ll see the same kind of dissension. Groups with differing access to privilege, power, and protection have a hard time hearing each other’s concerns.

(I would add that those police officers in pussy hats and riot gear are also being controlled and wounded by the patriarchy, though they probably don’t recognize it. It’s a flawed system that is doing damage to us all.)

A few days ago, I was part of a text conversation of another kind. My friend Jo shared that she had been verbally abused in a conversation on social media. She’d been invited into a conversation about whether or not patriarchy is real, and though she intuitively felt unsafe as the only women surrounded by opinionated men, trying to explain something that they had all benefited from, she took the risk because she cared about the person who invited her. She stated her discomfort, but that discomfort was used as a weapon against her to make her feel shame for wanting a “safe space”.

Jo’s story reminded me of the times when I too have felt unsafe, trying to explain sexism or discrimination to those who had more power than me. Several years ago, I wrote a letter addressing some sexist behaviour on the board of an organization I was part of and I sent it to the three men I thought needed to be aware of it. My letter was ignored by one, dismissed by another, and responded to only with a back-handed comment by the third. I was left feeling small and ashamed for “over-reacting” and unsafe to raise any such concerns again in the future.

I know, from listening to my friends who are Indigenous and people of colour, that they feel similarly when white people ask them to explain racism, or when they need to challenge racism in their workplace. It is unfair to expect the people who’ve been oppressed to explain to those who’ve benefited from the oppression. It puts them in a dangerous position where they are often targeted with more abuse for “over-reacting”, “being too sensitive”, etc. Some people even lose their jobs for daring to challenge the system.

Though I have to recognize safety as my privilege and my trap, I also believe that it is a human right. Those who dismiss my safety as irrelevant or who tell me I’m over-reacting and need to calm down are attempting to gaslight me – making me think that I’m crazy or weak for needing safety. That’s how oppressors win.

As I mentioned in my last post, trauma further complicates this issue. Unhealed trauma convinces us that we are unsafe even when we aren’t. And much of that trauma is hard to pinpoint because we may have inherited it or it may have been caused before we were old enough to know what was going on. The fear that comes up when a trauma memory is triggered is as real as the fear we felt when the trauma happened.

Note: All three of the friends mentioned in this post gave permission for their stories to be shared.