Hold your tongue and offer your heart instead 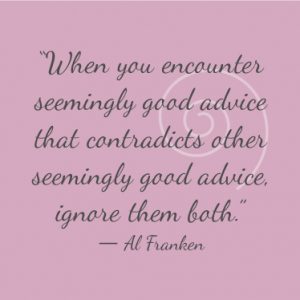 When my mom was dying of cancer, I occasionally got messages from well-meaning people who wanted to offer what they thought was valuable information about how mom could cure her cancer. Eat raw food, take more vitamin C, stop drinking milk – all of those suggestions and more showed up in my inbox.

After Mom died, I got messages from other well-meaning people who thought they knew how I should deal with my grief. One person even reprimanded me for sharing my grief as openly as I did on my blog. She thought that I, as a public person, had an obligation to my readers to write with more positivity. She was also afraid that I would “attract” more bad things in my life if I prolonged the grief and didn’t think more positive thoughts.

I had the same reaction every time unsolicited advice showed up – I bristled. When I’m feeling emotionally grounded, I can brush off those things that don’t feel helpful, but when I’m vulnerable, as I was then, I tend to bristle.

The advice didn’t have the intended impact. It made me feel small and judged. It made me feel like others knew how to “do grief” or “fix cancer” or even support my mother better than I did.

I worked through those reactions, and then I wrote a blog post called “My heart is broken, but please don’t try to fix it.” Grief, after all, is not something that can be “fixed” with platitudes and second-hand advice. It’s a journey we all must take in our own way. And I wasn’t about to quit talking about it, even when the Law of Attraction was waved in front of me like a red flag at a race track. My grief was an honouring of the relationship I had with Mom, not an invitation to the Universe to send more bad things my way. (I got a similar reprimand when I shared about my marriage ending.)

Recently, I shared an article called “Don’t tell cancer patients what they could be doing to cure themselves” on social media, and several people shared their own stories of how people responded to their cancer, MS, or other chronic illnesses. One person even heard that their cancer was an invitation for them to repent of their sins. It seems there’s always someone with an answer to every ailment. (I heard something similar when my third pregnancy suddenly went wrong – that it might be a judgement of some kind – or at least God trying to get my attention.)

Does unsolicited advice ever help fix a problem? I can’t think of a single time that it has. For the most part, I think that all of us do the same thing when we’re feeling vulnerable and someone tells us how to fix our problem – we bristle. And then we reject the advice.

“Talking at someone with cancer about what they should do, rather than being with them in a morass with no easy answers, is not you helping them. It is you unfairly shaming them for having failed at self-help, which isn’t even a thing.” – Steven W. Thrasher

Perhaps you’re one of those people who can’t resist offering unsolicited advice. I feel your pain – I’m often that person too. I have to bite my tongue sometimes in the face of someone else’s struggle. It can be SO HARD to sit with the messiness and not offer something that we’re SO SURE could be the answer to the problem.

But unsolicited advice isn’t really about the person we’re offering it to – it’s about US. It’s about our own need to be the hero, to be the fixer, to be useful. We prop up our own self esteem by being the person with the solutions.

Fixing other people’s problems even when they don’t ask us to is also about our discomfort with being in the messiness and leaving things unresolved. If we can offer a solution that fixes another person’s problem, then we can live in an illusion that the world makes sense – that A+B=C, that every question has an answer, every illness has a cure, and everything broken can be fixed.

Recently I interviewed Grace Quantock, who lives with disability and chronic illness, for The Helpers’ Circle. Grace shared a story of a raw food party she went to, where, one by one, people who discovered she had a chronic illness sat with her and pried into her eating habits, trying to find out how faithfully she followed a raw food diet. Each of these people was trying to find the one thing she was doing “wrong” so that they could protect themselves from what she was dealing with. They were so certain that a raw food diet was the answer that her illness was incongruent. If she was doing something wrong, then they could return to their illusion.

Parker Palmer shared a story of how people were eager to try to find a solution for him when he was going through his first experience of clinical depression. Well-meaning people told him to spend more time outdoors, while others tried to boost his self-esteem. The advice backfired – leaving him more depressed than he was before.

“Here’s the deal. The human soul doesn’t want to be advised or fixed or saved. It simply wants to be witnessed — to be seen, heard and companioned exactly as it is. When we make that kind of deep bow to the soul of a suffering person, our respect reinforces the soul’s healing resources, the only resources that can help the sufferer make it through.” – Parker Palmer

It feels so much easier to offer a fix and then walk away with our illusion of a world that makes sense than it does to sit in the messiness and be a witness. But what your friend really needs is not your answer – they need your presence. They need you to show up and hold space.

They need you to hold your tongue and offer your heart instead.

The next time you’re tempted to offer advice that wasn’t asked for, take a deep breath and exhale slowly. While you do, ask yourself what your friend REALLY needs and give them that instead. Even silence is better than the wrong words.