Sometimes holding space means that you have to break the rules 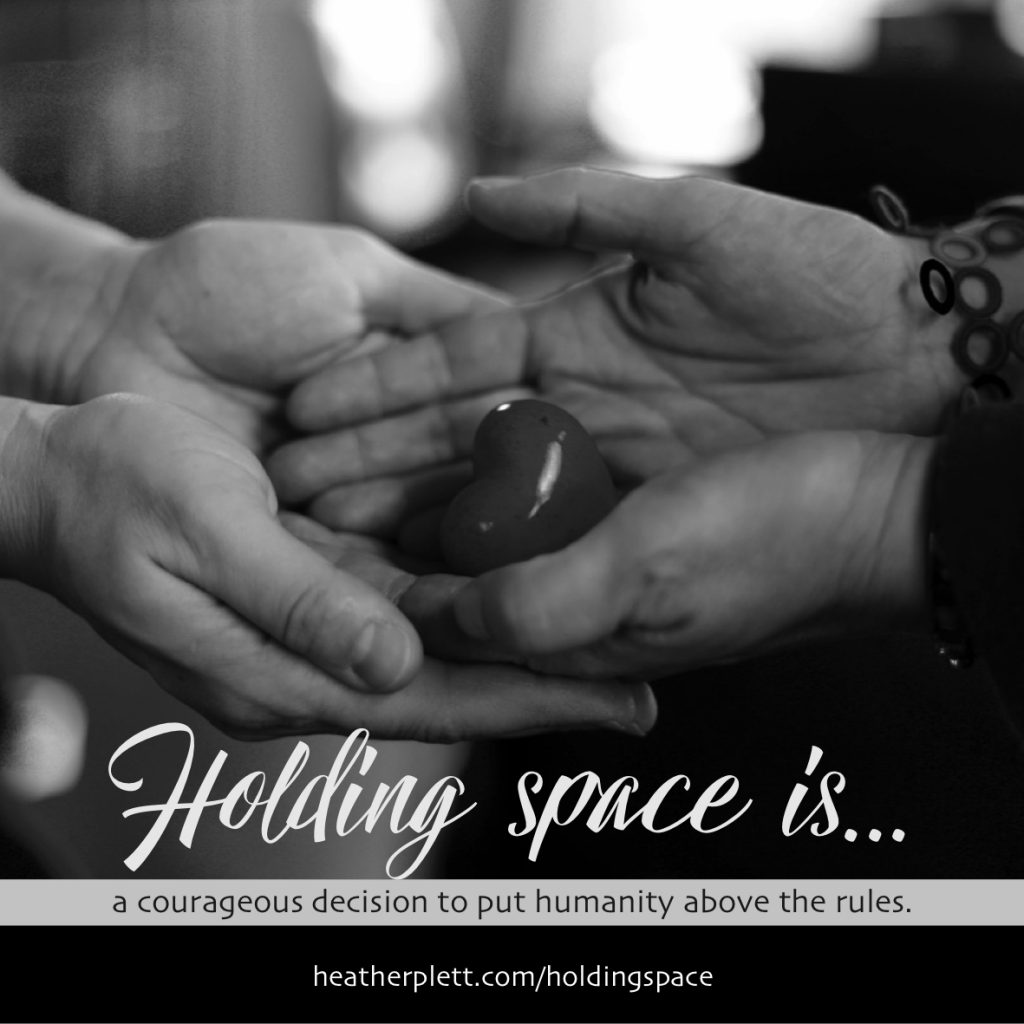 “Wow. You’re the first psychiatrist to introduce himself to me,” I said to the man who stood in front of me with his hand outstretched. “The other two ignored me and never gave their names. I wondered if I had become invisible.” I reached out to shake his hand.

I’d been at my former husband’s bedside for a couple of days, waiting for them to move him from a bed in the emergency room to one in the psychiatric ward. I was worn out and fed up and didn’t have any energy left for niceties.

“That’s because they don’t want you to know who they are,” he said, the frustration in his voice echoing mine. “Everyone in this hospital is afraid of being held accountable for what they say and do, so they’re happiest if you forget them. Nobody wants to get sued or reprimanded for giving you bad advice, so we do only what’s necessary and no more.”

For the next twenty minutes, he unloaded his frustration on me. It was neither professional nor appropriate, given the fact that I was sitting at the bedside of a man who’d attempted suicide just days before, but it was the first time anyone in the hospital was speaking to me with any degree of authenticity or openheartedness, so I didn’t mind. With story after story, he told me of the deep disillusionment he felt, stuck in a system that made him doubt whether he was doing any good in the world. “We start out in this work because we have good hearts and we want to help people,” he said. “The system crushes that in a person. I decide to quit my job at least once a day.”

The next week in the psychiatric ward bore out the truth of what he’d said. It was a bleak environment, where staff followed the rules and did what they were told but had little heart left to provide real care for their patients.They took away my husband’s belt and shoe laces, locked the door behind him, and then mostly ignored him for the rest of the week. (I could come and go, but only when I was buzzed in.) Once a day (except on weekends), a psychiatrist would visit for about fifteen minutes a day for a brief conversation meant only to check whether the meds they’d prescribed were working, nothing more. Once, when I approached the psychiatrist assigned to him (when there was finally some consistency and not a new one every day) at the nurses’ station to ask whether there was more I could do to support my husband, he told me that our time was up and he wouldn’t talk to me. I’d have to wait until the next day.

I threatened to take my husband home or to find an alternate facility if there wasn’t more care or counselling offered to him. “If you take him home,” he said, coldly, “you do so against my advice and I will cut off his prescription.” I felt trapped. If I risked taking him home, he might have a relapse in front of our children, but if he stayed there, he might never lose that dead look in his eyes.

Desperate, I reached out to friends who worked in mental health and found a private psychologist who was willing to see my husband. I convinced the nursing staff my husband needed a “hall pass” for an afternoon (I’m not sure what excuse I made up, but I couldn’t tell the truth or I’d be accused of interfering with his care) and I snuck my husband out of the psych ward so that I could take him to see a psychologist.

That week tested every bit of strength and courage I had. During the day, I was fighting the system, serving as a fierce advocate for my husband. In the afternoons, I would drive away from the hospital weeping from the exhaustion, grief and fear of it all. Then, when I neared home, or my daughters’ school or the soccer field, I’d wipe away the tears, slip on an invisible mask, and become the supportive, strong mom my children needed. When other parents on the soccer field would ask where my husband was, I’d give some vague answer about a business trip or meetings. It wasn’t a safe enough environment for the truth. Changing the subject, I’d smile and make small talk and pretend that there was nothing more important to me in that moment than a soccer game. Then I’d drive home and feed my daughters, and when they were in bed, I’d muffle my screams and tears with my pillow. The next day, I’d do it all again.

I’m not sure why this memory came back to me recently, more than seven years after it happened, but I suppose there was still some residual grief and trauma stuck in my body that needed to be held for awhile. I’m not even sure what conclusions I want to draw from it for the purpose of this post, but I’m going with it anyway, because it reminds me of so many of the reasons why I keep believing this work I do, teaching people how to hold space for each other and for themselves, is so vital. Some days I’m tempted to go sit at the doors of that hospital to try to reach out to the spouses and daughters and parents who look the most terrified and say “if this hospital hurts you, come back and sit with me awhile”. Some days I want to lobby the health department to invest in my course or one like it for everyone in the system, starting with the leaders who decide how care is given.

When these memories started to resurface, I knew that it was time to extend special care to myself, letting myself shed some of the tears that got stuck in my throat, letting myself release the anger that I stuffed down in order to be a supportive mother and wife, and going for a good massage to release what’s still in my body. One thing I know for certain is that the work that I do in the world is only as good as the care I extend to myself. Unless I give myself time for healing and rest, I can not hold space for the healing of others. (That’s what the next few weeks will be about, as I replenish myself at the end of a very full year.)

As I reflect on this story, there are a few things that it continues to teach me:

If you want to know more about what it means to hold space, or you want to deepen your practice so that you don’t become jaded like the healthcare professionals I encountered, consider joining the Holding Space Coach/Facilitator Program that starts in January. There are only a few spots left – perhaps one of them is yours.