What came first – the trauma or the patriarchy? 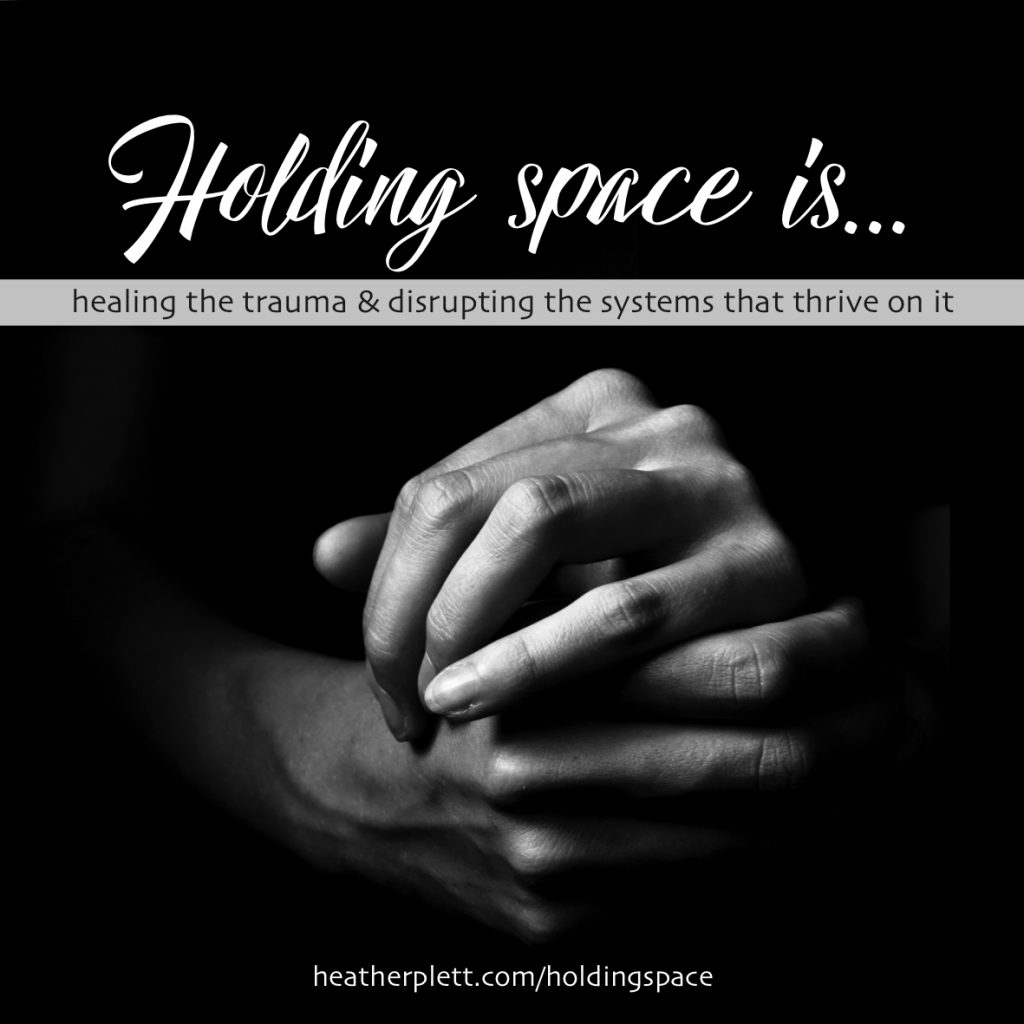 Sometimes you don’t know that you know something until you hear the words come out of your mouth. That’s how it was when I said these words a few weeks ago, while teaching my Holding Space Coach/Facilitator Program…

“Trauma is the soil in which the patriarchy has grown.”

Now that I’ve thought about it more, I realize it’s a bit of a “chicken and egg” situation. Which came first – the trauma or the patriarchy? The patriarchy may also be the soil in which trauma has grown. One nourishes the other, which in turn nourishes the other, and so on, and so on. Did trauma happen to a group of people and so they rose up and began to dominate and create systems of domination to protect themselves? Or did people begin to dominate out of their own selfish ambition and need for power and soon learned that it was easier to dominate traumatized people? I don’t have a sufficient lens on history to analyze this.

Also, you can interchange the word “patriarchy” with any system of dominance (white supremacy, colonization, oppression, heteronormativity, kyriarchy, etc.) and the statement remains applicable. Trauma informs and supports them all.

Consider all of the ways that trauma is used as a tool to help dominant systems uphold their dominance. Indigenous children were ripped out of their families and forced into residential schools where they were stripped of their language and rituals. African people were rounded up, forced onto ships, and brutally enslaved in North and South America. Women are routinely raped in conflict situations. Jewish families were thrust into concentration camps and many were killed in gas chambers.

(Side note: I highly recommend the movie Indian Horse for a gripping story about how the trauma of colonization controls and destroys people.)

The stories go on and on throughout history, and these are just the most notable and horrific. There are so many more subtle ways that trauma is used as well. The #metoo movement, for example, is revealing the many ways in which sexual assault has been used to dominate women in the workforce, in the media, and at home.

None of these stories are “once and done” situations either. Every one of them not only traumatizes the generation most directly impacted, it plants the seeds of trauma into the family systems. The generations to come inherit the trauma of their parents and their grandparents, and so on, and so on. The result is often the kind of dysfunction, disempowerment and addiction that makes it difficult for them to rise up and challenge their oppressors. Trauma is so deeply (and invisibly) rooted in our bodies, that it can take generations to heal it, especially where it has not been named and faced.

Once you have implanted the seeds of trauma into a family system, it becomes easier and easier to dominate the people in that system. Traumatized people no longer need the original, horrific event to make them shrink in fear. All you have to do is offer a subtle reminder of the trauma, and they are triggered into their fight, flight or freeze reactivity (also known as “amygdala hijacking”), and in that state, they are easier to control and/or manipulate. An abused child, for example, will continue to flinch at a raised hand or raised voice long after the abuse is over and will continue to go to great measure to find protection against what they see as a dangerous world.

Sometimes it seems that we now have so much trauma running through our systems that there are fewer people WITHOUT trauma than WITH trauma (either direct or generationally inherited). It seems we’re all the walking wounded, trying to function in a world that triggers us on every front.

If you want to understand how trauma is used as a tool of domination, consider the treatment that Black people (particularly in the U.S., but also in Canada) have received from the police. Unlike white people, they can never assume that they are safe in the presence of the police, because they have seen too many people like them killed and/or unfairly arrested or brutalized by the police. In a traumatized system like that, you only have to bring a police officer into the environment to cause a state of panic in many people. That’s a system of dominance which not only traumatizes people, but gives those in power an excuse to continue to dominate. They assume that their experience of traumatized Black people (who might respond with belligerence, anger, resistance, etc., as a result of their fight/flight/freeze activation) is universal and even when Black people are calm and cooperative (as was the case in Starbucks recently), they assume the worst and arrest them needlessly. Dominance continues.

But trauma doesn’t only impact those being dominated. When there’s trauma in a system, in impacts people at all levels of it. I think it’s interesting to note, in fact, that it’s often the people with seemingly the most power in a system who are the most reactionary when they’re triggered. Why, for example, if women have less power than men, is it usually men who commit acts of violence? I suspect it’s partly because they’ve had less reason to develop coping strategies and less encouragement to heal and name the trauma. (I was at a workshop recently, where men were doing some healing work and, in one particularly poignant moment, three men were at the centre of the circle weeping and holding each other. It was one of the most powerful and rare moments of healing I’ve ever witnessed and I wish that more men could find themselves there.)

A new concept came into my awareness lately – that of allostatic load. (Thanks Sam.) According to Wikipedia, “it’s ‘the wear and tear on the body’ that accumulates as an individual is exposed to repeated or chronic stress. It represents the physiological consequences of chronic exposure to fluctuating or heightened neural or neuroendocrine response that results from repeated or chronic stress.” Here’s a simple Youtube video that explains it. And Roxanne Gay wrote about it recently in her New York Times column.

While anyone can suffer from allostatic load, I think it’s fair to assume that those who’d be most susceptible to it are those who’ve been most oppressed by systems of dominance. According to Wikipedia, “in environments of chronic or frequent activation of the stress response, such as exposure to violence or trauma, poverty, war, hypoxia, or low rank in a social hierarchy, the stress response constantly disrupts homeostasis resulting in overexertion of physiological systems.” When allostatic load is a factor, people’s bodies can shut down and their brains have less capacity for complex thought and solution-finding. That puts them at a serious disadvantage and makes them easier to dominate.

So… what should we do about this? Should we work at healing the trauma or work at dismantling the systems that created and utilize it? Again, it’s a chicken and egg situation. One informs the other and neither can be entirely isolated from the other. You can’t dismantle a system when all of the people involved in its dismantling have unaddressed trauma. And if you heal trauma without addressing the source of the trauma, you’ve only found a short-term solution – the trauma will rear its head somewhere else.

We need lots of healers and lots of dismantlers. We need people to deepen their understanding of trauma so that they can hold space for it without further contributing to it. We also need warriors who will challenge the systems so that the dominance stops.

As I said in my last article, we should all be in a quest for our own sovereignty, so that we can meet each other as whole and healthy people rather than damaged people who harm each other. But it’s nearly impossible to seek sovereignty when you haven’t worked first to heal trauma that took your sovereignty away. That is, after all, what’s happening when the dominant systems utilize trauma to keep people disempowered – they’re colonizing people and taking their sovereignty away. Because sovereign people are dangerous to those who want to dominate them.

If you are a traumatized individual, start with your own healing so that you don’t pass the trauma on to others. But don’t stop there. Look for ways of healing at a collective, systemic level. This is something I’m learning more and more about as I dive into healing methodology like family systems constellations (which I had the pleasure of studying with Francesca Mason Boring recently). If we don’t address the trauma rooted in our ancestral lineage and family systems, we fall short of what we need to do to change the future.

If we heal our traumatized systems (and ourselves) and claim our sovereignty, I believe we can become healthy and whole together.

p.s. This is a subject we cover in the Holding Space Coach/Facilitator Program. Registration is now open for the session that starts in July.